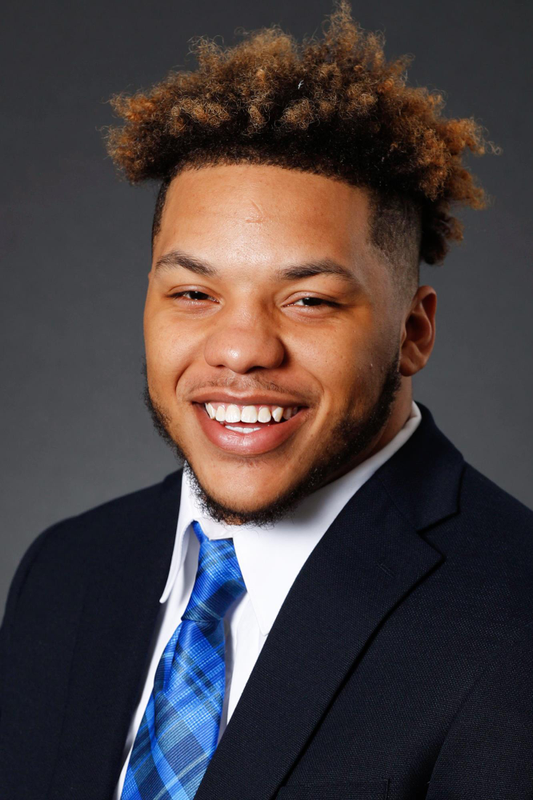 Career
• Elected a two-time team captain
• A four-year letterwinner who ended his Wildcat career as one of the most prolific running backs in school history, totaling 3,644 rushing yards in his career, third-most in program history
• Ranked fifth on the FBS active career rushing yards list
• Had 32 rushing touchdowns, second on the Cats’ all-time list
• Had 35 total touchdowns, fourth on the Cats’ all-time list
• Recorded a school-record 20 100-yard games
• Graduated in May of 2022 with a degree community and leadership development

2022 – Senior
• Third-Team All-SEC (Phil Steele)
• Elected one of seven team captains
• Maxwell Award Watch List
• Walter Camp Player of the Year Watch List
• Reese’s Senior Bowl Watch List
• Played in eight games with seven starts and had 175 rushes for 904 yards and six TDs
• Rushed 19 times for 72 yards and one touchdown in his return at Ole Miss … Also had three catches for a career-high 40 receiving yards
• Had 126 yards vs. South Carolina, becoming the first player in school history to have at least three 125-yard rushing games against the same opponent … • In four games, he carried the ball 68 for 474 yards (7.0 per carry) and four touchdowns
• Had 31 rushes for 197 yards and two touchdowns in the win over Mississippi State … 31 carries were a career best and most for a UK running back since Benny Snell Jr. had 32 carries against Vanderbilt in 2018 … 197 yards were the second-most in his career
• Rushed 29 times for 112 yards in the win over Missouri
• Had two rushing TDs against Vanderbilt, marking the eighth time in his career, and the second instance this season, he has recorded multiple touchdowns rushing in a single game
• Had 24 carries for 120 yards in the win over Louisville, becoming the first player to have three 100-yard games against the Cardinals
• Has totaled 100-plus rushing yards in five of the last six games
• Preseason Second-Team All-America (Phil Steele)
• Preseason Fourth-Team All-America (Athon)
• Preseason First-Team All-SEC (Phil Steele)
• Preseason First-Team All-SEC (Coaches)
• Preseason Second-Team All-SEC (Media)

2020 – Sophomore
• First-Team All-SEC (Pro Football Focus)
• Fourth-Team All-SEC (Phil Steele)
• Played in nine of 11 games
• Team’s leading rusher with 785 yards on 119 carries along with a team-high 11 touchdowns
• Averaged an SEC-high 6.6 yards per carry (17th nationally)
• Ranked fifth in the SEC in rushing (87.2 ypg)
• Had four 100-yard games with a career-best 149 yards vs. Vanderbilt
• Carried the ball 17 times for 84 yards, including both of UK’s touchdowns, in the win over NC State in the TaxSlayer Gator Bowl
• Rushed 14 times for 139 yards and a career-high three touchdowns in the win over South Carolina… His 79-yard touchdown run clinched the game in the fourth quarter and marked his career long run and the fifth-longest run in school history against an SEC opponent
• Became just the second player in school history, also Mark Higgs, to have two runs of at least 74 yards in the same season (had a 74-yard run vs. Vanderbilt)
• Also had a career-high 151 all-purpose yards vs. South Carolina
• Rushed 13 times for a career-high 149 yards and a career-high-tying two touchdowns vs. Vanderbilt
• Averaged 11.5 yards per attempt, best for a UK rusher against an SEC opponent (min. 10 carries) since Randall Cobb averaged 17 yards (10 for 170) vs. Vanderbilt in 2010
• Rushed a career-high 20 times for 108 yards vs. No. 5 Georgia
• Led the Wildcats on the ground in the win over Tennessee with 13 carries for 73 yards, including a two-yard touchdown run that closed the scoring

2019 – r-Freshman
• Saw action in all 13 games
• Totaled 71 carries for 533 yards and six scores, ranking fourth on the team in all categories
• Averaged 7.5 yards per carry (second on the team behind Lynn Bowden’s school record 7.9 ypc)
• His 41.0 yards per game average ranked ninth among SEC freshmen
• Ranked tied for eighth with teammate Kavosiey Smoke in scoring (TDs) among SEC freshmen (2.8)
• Had two 100-yard rushing games
• Rushed six times for 18 yards in the Belk Bowl win over Virginia Tech … Had a two-yard TD run late in the second quarter, his sixth TD of the year
• Rushed nine times for 125 yards, including a career-long 64-yard touchdown in UK’s 45-13 win over Louisville
• Rushed 15 times for a career-high 129 yards and two touchdowns in the win over Vanderbilt

High School
• A three-star prospect by all the major recruiting services
• Played on both sides of the ball as a running back and strong safety
• Ran for 1,669 yards on 233 carries with 25 touchdowns as a senior
• Averaged 7.2 yards per carry
• Named Henry County Offensive Player of the Week in November after running for 236 yards and five touchdowns in a win over Union Grove
• Rushed for 1,401 yards and 15 touchdowns with eight separate games of 100-plus yards rushing as a sophomore
• Increased his numbers to 1,660 yards rushing and 26 touchdowns as a junior
• Earned All-State, All-Region and All-County honors
• Named the Ola 2015 Player of the Year by MaxPreps
• Coached by Jared Zito
• Also lettered in basketball and track
• Chose UK over offers from Ole Miss and Mississippi State

Chris Says
• His nickname is “C-Rod”
• Most people don’t know he likes country music
• The three people he would invite to his fantasy dinner are Chance the Rapper, Drake, and Odell Beckham Jr.
• When he played football as a kid he pretended to be Marshawn Lynch
• Michael B. Jordan would play him a movie about his life

No. 19 Kentucky Falls at Third-Ranked Tennessee