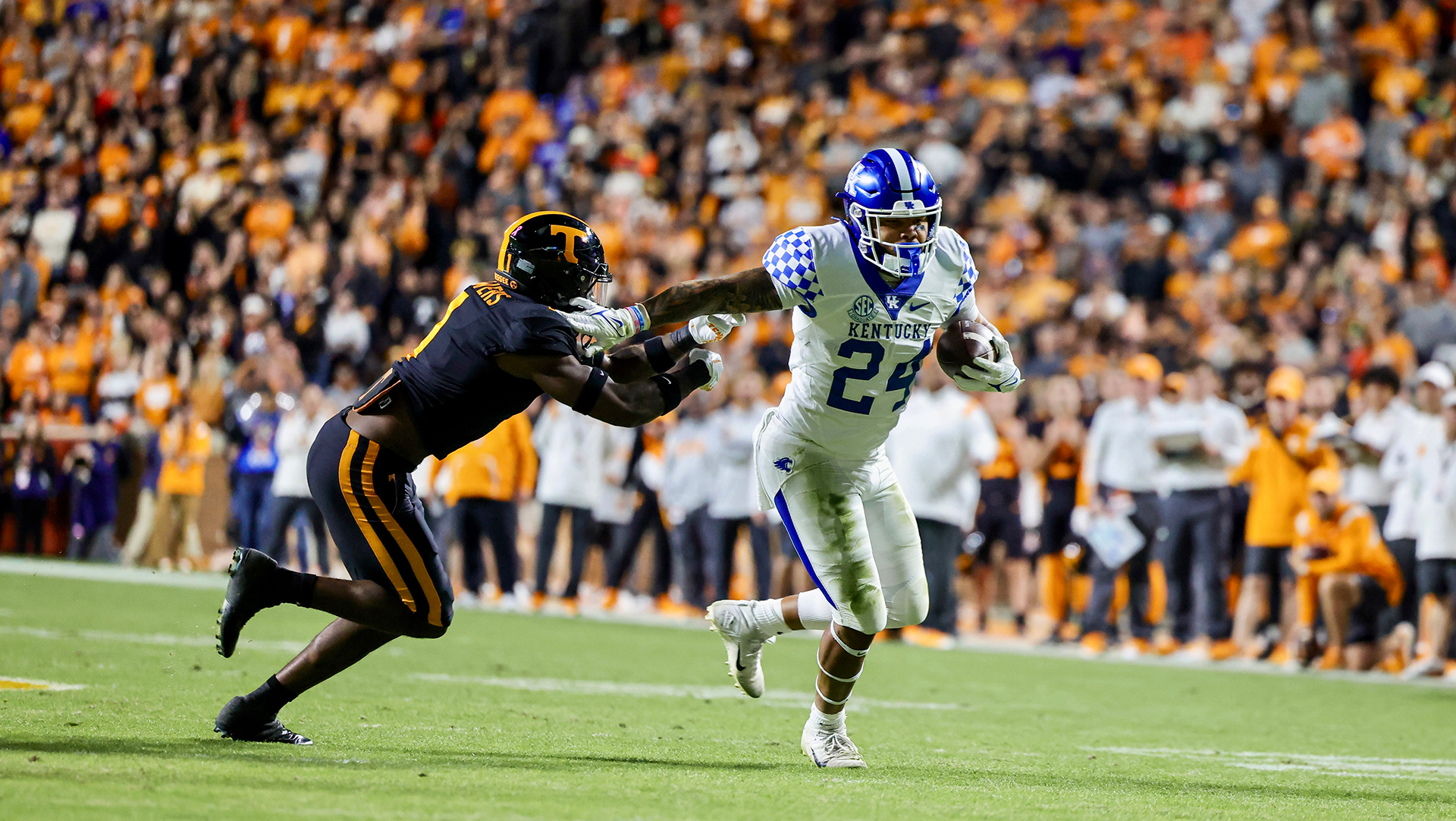 No. 19 Kentucky Falls at Third-Ranked Tennessee

KNOXVILLE, Tenn. – Chris Rodriguez Jr. rushed 15 times for 64 yards and a touchdown but No. 3 Tennessee beat No. 19 Kentucky 44-6 on Saturday night at Neyland Stadium.

Kentucky (5-3, 2-3 SEC) fell behind early and never caught up against the high-powered Tennessee offense.

Tennessee (8-0, 4-0) took the opening kickoff and wasted little time getting on the board. The Vols needed just five plays to cover 75 yards, the final 55 coming on a 55-yard touchdown strike from Hendon Hooker to Jalin Hyatt. Chase McGrath added the extra point and Tennessee led 7-0 with 13:33 to play in the first quarter.

Kentucky went three-and-out on its first possession and was forced to punt. UT took over on its own 37 yard line. The Vols were penalized three times on their next drive and would be forced to punt as well.

The Cats would fare much better on their second drive. Kentucky converted on third down when Levis connected with Dane Key for eight yards. Then, on the next play, Levis lofted a pretty pass to tight end Jordan Dingle down the left sideline for 24 yards. UK would get inside the red zone on the back of Rodriguez. On second-and-goal from the three, Rodriguez went up the middle and into the end zone for the score. However, the PAT was blocked and Tennessee still led 7-6 with 4:44 left in the first.

Tennessee would answer on its next drive. As the first quarter ended, with the Vols leading 7-6, UT was inside the UK five yard line.

On the first play of the second quarter, Princeton Fant scored a two-yard touchdown on a run up the middle. McGrath missed the PAT and the Vols led 13-6 with 14:56 left in the half.

Kentucky would go three-and-out on its next possession and would punt, giving the Vols the ball back on their own 23 with 13:54 left in the half.

UT would extend the lead on that possession, covering 77 yards in eight plays, ending with a one-yard touchdown rush by Jaylen Wright. McGrath added the PAT and the Vols led 20-6 with 11:12 to play in the first half.

The Cats would get into the Tennessee red zone and, on fourth-and-one from the UT 16, Levis went up the middle on a quarterback sneak to extend the drive. But on third and seven from the UT 12, Levis’ pass for Dane Key caromed into the air, and Tennessee’s Juwan Mitchell intercepted it and returned it to the Kentucky 45 yard line with 4:29 to play in the half.

The UK defense would make an important stop on the next possession, forcing the Vols into a three-and-out and a punt. The Cats would take over at their own two yard line with 2:49 to play in the half.

The Cats would get out of the shadow of their own goal posts on a 16-yard run up the middle by McClain. But Kentucky would be forced to punt and the punt was nearly blocked and went just 18 yards. The Vols took over at their own 35 with 37 seconds left in the half.

Tennessee would take advantage of the late possession when Hooker hit Hyatt on a 31-yard touchdown pass with 22 seconds left in the half. McGrath added the PAT and the Vols led 27-7, which would be the halftime score.

The Vols would outscore the Cats 17-0 in the second half to beat Kentucky for the second straight season.

Kentucky hits the road again next week, travelling to Missouri for another SEC East showdown.