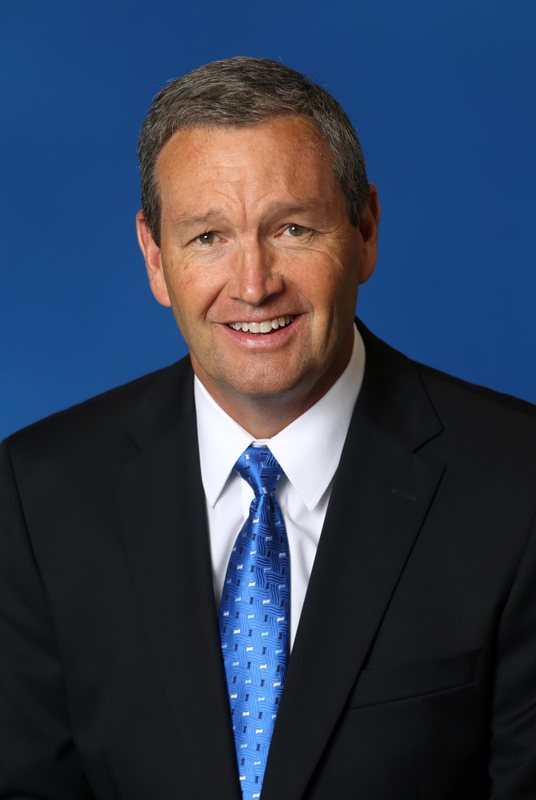 With Mitch Barnhart completing his 20th year as Director of Athletics at the University of Kentucky, it’s fitting that milestone achievements accompany a milestone year as leader of the Wildcats.

The ninth-place finish extended streaks of five years in a row in the top 20 and 10 consecutive years in the top 30. The Directors’ Cup began in 1993-94 and the best eight finishes in school history have been under Barnhart, all of which have come in the last nine years.

In addition to the Wildcat success in the arenas of competition, 2022 also has been a year of personal recognition for Barnhart.  In August, he was inducted into the (state of) Kentucky Sports Hall of Fame. In December he will receive the John L. Toner Award for excellence in athletics administration from the National Football Foundation and College Hall of Fame.

Those honors add to a growing list of accolades for Barnhart, who was selected the 2019 AD of the Year by the SportsBusiness Journal.  Following that honor, Barnhart’s acumen was put to its strongest test in 2020-21. As if it were not enough to guide UK through the severe challenges in health care, competition and finances caused by Covid-19, Barnhart also was Chair of the NCAA Men’s Basketball Committee, a task which required him to take a lead role in re-creating and executing the organization’s most prominent event in the midst of a pandemic.

And, as he has done so often during his two decades at Kentucky, Barnhart rose to the occasion by drawing upon his wisdom, experience and – most of all – his steadfast dedication.

Working alongside the NCAA staff, in the span of only two months, Barnhart and the tournament committee scrapped the time-tested format and invented a new procedure by bringing all 68 teams to one location and supporting them with numerous health and safety protocols. As a result, all but one of the scheduled games was played and the mission was completed when Barnhart handed the championship trophy to the victorious Baylor Bears.

Meanwhile in Lexington, with assistance from the Southeastern Conference, UK HealthCare, and state and local officials, Barnhart kept the Wildcats on the prowl en route to one of the most successful years in UK Athletics history.

The Kentucky football team was able to play all of its scheduled games and topped the campaign with a fifth-straight postseason appearance, and third-consecutive bowl victory, with a win over No. 23 North Carolina State in the TaxSlayer Gator Bowl. (The Wildcats extended those strings in the 2021 season with a win over No. 17 Iowa in the Vrbo Citrus Bowl.)

In February of ‘21, the women’s swimming and diving team won its first SEC championship. A month later, UK rifle claimed an NCAA championship.  That was followed by another national crown, as the volleyball squad earned the NCAA title, the first by an SEC school in that sport.

All counted, UK has earned six NCAA championship rings during Barnhart’s term, including men’s basketball in 2012, volleyball in ’20 and rifle in 2011, ’18, ’21 and ‘22. UK also has totaled 51 regular-season and tournament conference championships under his leadership, including first-time titles in baseball, women’s tennis, men’s golf and women’s swimming and diving.

The national accomplishments are a result of Barnhart’s work since his arrival in the summer of 2002.  He has steadily invested in the growth of all UK teams while maintaining a singular commitment to the holistic development of Wildcat student-athletes. Matching resources to expectations has been a hallmark of his tenure, with the proof coming in the form of student-athlete support, staff enhancements and more than $300 million in facility improvements since 2007. At the heart of everything are the core values Barnhart has instilled in the department he leads: character, integrity, knowledge, stewardship and competitiveness.

A department-wide 3.0 grade-point average among student-athletes and increased community service have been long-standing goals for Barnhart.  The GPA benchmark was first met in the spring semester of 2010 and has now reached a streak of 20 consecutive semesters.  In spring 2020, UK achieved a cumulative GPA of 3.534, the best in school history.

UK athletes have set records for graduation rates and maintained a perfect mark in the 18-year history of the NCAA Academic Progress Rate, making UK one of just two SEC schools never to incur an APR penalty.

Community service has risen to more than 4,000 hours annually and includes outreach to the Lexington area, the Commonwealth of Kentucky and as far away as Ethiopia, the Dominican Republic and Panama. During the last year, when natural disasters devastated western and eastern Kentucky, a pair of telethons sponsored by UK Athletics raised more than $8 million and numerous student-athletes and staff have taken part in other fundraising projects, supply assistance, cleanup and the rebuilding process.

Since Barnhart’s arrival, the Directors’ Cup standings have reflected the progress in the fields and arenas of competition. Barnhart inherited a department that finished 50th nationally in 2002-03, his first year in Lexington.  By 2012-13, UK climbed to No. 25 in the country, UK’s first top-25 finish.

Kentucky cracked the top 10 for the first time by coming in at No. 10 for the 2016-17 school year, now surpassed by the recent No. 9 finish.  The next goal for the Wildcats is a top-five showing.

Four years after his first nomination by the SportsBusiness Journal, Barnhart was named the publication’s 2019 Athletic Director of the Year, but he has always been more interested in the achievements of UK student-athletes than his own. On that count, UK has had plenty to celebrate.

Over the last two years alone, five Wildcats have been named National Athlete of the Year in their sport, including Abby Steiner (women’s track and field) and Oscar Tshiebwe (men’s basketball) in 2021-22.

Asia Seidt of swimming and diving was chosen for the highly prestigious NCAA Woman of the Year award, covering all female athletes in all divisions, for her combination of athletic success, academic excellence and dedication to community service.  Numerous additional Wildcats have won national awards for their performances on the field, in the classroom and in the community.

A school-record total of 20 Wildcat athletes and coaches participated in the Tokyo Olympics, bringing home a school-record 10 medals, including seven gold.

While UK athletes have achieved remarkable success, Barnhart is always seeking improvement. One recent example is UK’s Student-Athlete Experience Division. Through the division’s work – known as “The Kentucky Road” — UK has renewed its commitment to prepare student-athletes to enter life after UK by equipping them with requisite professional skills and helping them identify and pursue internship and work opportunities while continuing to provide the academic support that has made UK Athletics a trendsetter in college athletics for the last four decades.

An example of cutting-edge performance has been in the area of personal branding. A current hot topic among athletes, UK was at the forefront as the first school in the nation to implement the INFLCR platform, which provides student-athletes access to photos and highlights to enhance their social media presence. Additional assistance comes in the form of educational seminars, such as financial literacy, and the extension of scholarships as needed to complete bachelor’s degrees.

Numerous student-athletes are prospering in the field of name-image-likeness, as the high profile of UK Athletics and the personal branding and education provided to the athletes have enabled them to capitalize in the new era.

Investment in the success of UK student-athletes in all facets has been a theme of the Barnhart era, beginning with the provision of funds for full coaching staffs and scholarship allotments for every UK sport. Barnhart also has invested strategically in UK Athletics’ facilities with new construction that includes the Joe Craft Center; new stadiums for track and field, softball and soccer; the UK Golf House; and the Wildcat Coal Lodge dormitory. The home of Kentucky football, Kroger Field, underwent a $126 million renovation completed in 2015 and the $45 million Joe Craft Football Training Facility opened a year later. New scoreboards were added for the 2022 season. A new $49 million baseball stadium – Kentucky Proud Park – opened in fall of 2018.

More facilities improvements are on the way with a renovation of the Nutter Field House and construction of a new indoor track and renovation of Memorial Coliseum on the drawing boards.

Even with the department’s growth and the increasingly competitive nature of college sports, UK Athletics has remained financially self-sufficient under Barnhart’s management, operating with a balanced budget and with the help of no state or University funds. Seeing pressing facility needs on campus as well, Barnhart is fulfilling a $65 million commitment for athletics to fund nearly two-thirds of the Don & Cathy Jacobs Science Building on campus. He also directs an annual $1.7-million contribution to the University’s scholarship program. Millions more dollars from the athletics budget stay on campus each year through athletic scholarship payments, administrative support payments, merchandise royalties and other avenues. Additionally, UK also has phased out the athletics fee previously paid by students as part of their tuition.

A steadfast believer in the transformational power of college athletics, Barnhart is influential on the national level. Already having served on numerous committees and boards for the NCAA and the National Association of Collegiate Directors of Athletics (NACDA), including his five-year term on the Men’s Basketball Tournament Committee, he remains on the national stage as a member of the College Football Playoff Committee.  He is one of only four people who have served on the football playoff committee and as chair of the men’s basketball tournament.

On a league level, Barnhart – the longest-tenured athletics director in the conference and second-longest among ADs in the Power 5 conferences – was named chair of the SEC Athletics Directors in 2017, the latest instance of his active involvement in SEC projects. Of recent note is his work with the SEC Compliance Committee and the SEC Network Content Committee, which helped the highly successful launch of the largest new cable channel in television history.

Barnhart’s legacy at UK includes helping develop seven people who have gone on to become athletics directors at Division I universities, including Greg Byrne of Alabama, Mark Coyle at Minnesota, Rob Mullens at Oregon, Scott Stricklin at Florida, John Cohen at Auburn, DeWayne Peevy at DePaul and Kevin Saal at Wichita State.

Barnhart is a native of Kansas City, Kansas. He earned his bachelor’s degree from Ottawa University (Kansas) in 1981 and a master’s in sports administration from Ohio University.

In addition to the extraordinary achievements of his work world, reaching new heights is also a theme of his personal life. An avid mountain climber, Barnhart has scaled Mount Kilimanjaro, the highest mountain in Africa, along with two of the most challenging peaks in the United States, Mount Rainier in Washington and the Grand Tetons in Wyoming. He also has performed two tandem parachute jumps with the Army Golden Knights. Impactful in community service, Barnhart has taken part in mission trips and was on the national advisory board of K-Love Radio.

Barnhart and his wife, Connie, also actively serve and support the Christian Student Fellowship and the Fellowship of Christian Athletes on campus in an effort to minister to young people. Connie serves on the board of Easter Seals, using her background in physical therapy to assist others in rehabilitation services.

The Barnharts have three children, Kirby Willoughby, Blaire Jansen and Scott; Kirby’s husband, McKenzie, and their sons Cooper, Reece and Gunner; Blaire’s husband, Andrew; and Scott’s wife, Cassie, and their daughter Rylee. The family’s dedication to the campus, the commonwealth of Kentucky and the Big Blue Nation led University leaders to name the stadium area of baseball/soccer/softball as the Barnhart Family Complex in 2020.