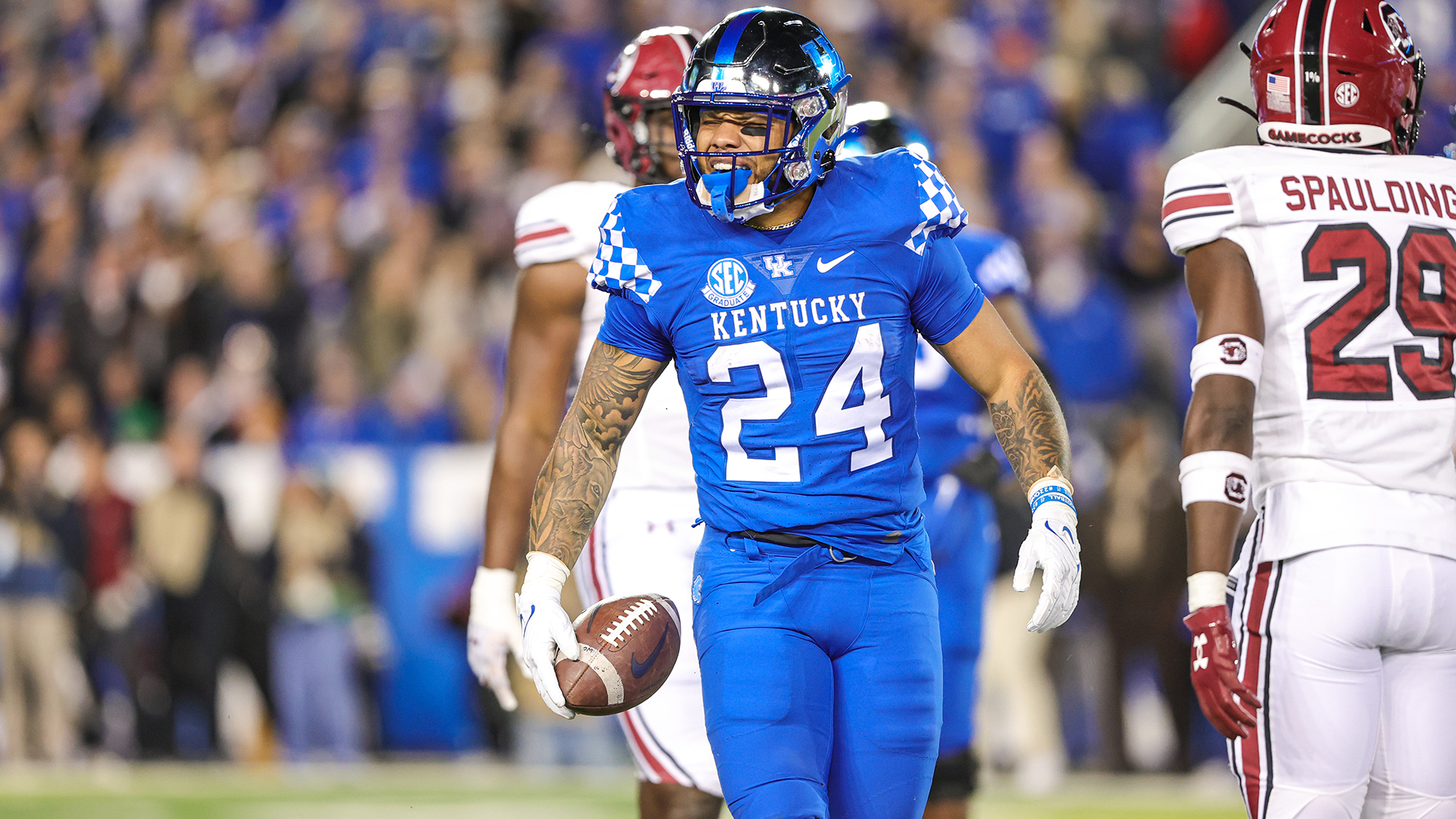 Levis suffered a lower body injury in last week’s loss at Ole Miss and was unable to play on Saturday night. The Cats turned to redshirt freshman Kaiya Sheron behind center. The Somerset, Kentucky, native connected on 15 of 27 through the air for 178 yards and two touchdowns, with one interception.

Rodriguez went over 100 yards for the 16th time in his UK career. He also moved past Mark Higgs and into fifth place on UK’s career rushing list in the game.

The Cats got a big effort from its defense, led by DeAndre Square, who had nine tackles in the game. Jordan Wright added seven tackles for the Cats and D’Eryk Jackson had five.

On the following possession, Kentucky would make one first down before being forced to punt. South Carolina got an 18-yard return from Josh Vann and the Gamecocks took over at their own 38 with 11:39 still remaining in the first quarter.

South Carolina (4-2, 1-2) was affected by the UK home crowd on the next possession, committing two false start penalties. The Gamecocks would be forced to punt and UK would take over at its own 24 with 10:18 still left in the first half.

Kentucky was forced to punt on its next possession and the Gamecocks would block the Colin Goodfellow kick. King-Demenian Ford blocked the kick and South Carolina recovered at the UK 22.

The Gamecocks appeared to be ready to go ahead by two scores, but UK’s Tyrell Ajian sacked Ga’ecocks’ quarterback Spencer Rattler, forcing a fumble that Kentucky’s JJ Weaver recovered at the 21.

Kentucky would put together a solid drive with the ensuing possession. The Cats covered 52 yards before the drive stalled at the South Carolina 27. From there, Matt Ruffolo tried a 45-yard field goal, but the try clanged off the left upright, keeping the Cats off the board. South Carolina took over at their own 35 with 1:22 remaining in the first quarter.

South Carolina would lead 7-0 after the first quarter.

The Gamecocks would make two first downs on the next drive and would get into UK territory. However, on a fourth-and-two from the Kentucky 40, Lloyd was stuffed in the backfield for a four-yard loss by DeAndre Square and JJ Weaver, giving the Cats the ball at their own 44 with 11:53 to play in the half.

Kentucky would drive into South Carolina territory on the next possession, riding Rodriguez and JuTahn McClain to get into the red zone. Then, Sheron connected with Jordan Dingle over the middle for a 16-yard touchdown. Ruffolo added the point after and the game was tied 7-7 with 8:30 left in the half.

The teams would exchange punts late in the half, and South Carolina took over at the UK 43 with 2:37 left in the half. But with under a minute to play before halftime, Rattler was intercepted by Trevin Wallace at the UK 19 with just 37 seconds before halftime. The Cats would run one play and would let the half expire with the teams tied 7-7.

South Carolina had the first possession of the second half and Lloyd started the possession with an 18-yard run. Later in the drive, on third-and-nine from the South Carolina 44, Rattler connected with Jaheim Bell for a 14-yard gain. Then, two plays later, Rattler hit Antwane Wells in the right flat, and Wells scampered 42 yards for the Gamecock touchdown. Jeter added the PAT and South Carolina led 14-7 with 12:47 left in the third quarter.

After a Kentucky punt, South Carolina put together one of its best drives of the night. The Gamecocks went 70 plays in 14 plays, covering 7:01 on the clock However, the UK defense stood tall in the red zone, forcing South Carolina into a 32-yard Jeter field goal, which was good, and the Gamecocks led 17-7 with 2:38 left in the third. That would be the score after three periods.

In the fourth quarter, South Carolina would add to its lead with a 24-yard touchdown rush by Jalen Brooks. The PAT made it 24-7 with 6:53 to play.

Kentucky would score on the ensuing drive, with Sheron connecting with several receivers, including McClain, who caught a 10-yard touchdown pass. Ruffolo added the PAT and South Carolina led 24-14 with 2:49 to play.

The Cats would attempt an onside kick but South Carolina recovered at its own 49. The Cats forced South Carolina into a three-and-out and a punt. But on the first play of the following possession, Sheron was intercepted, sealing the win for the Gamecocks.

Kentucky returns to action next Saturday, hosting nationally-ranked Mississippi State at Kroger Field. Kickoff is set for 7:30 p.m. ET and the game can be seen on the SEC Network.