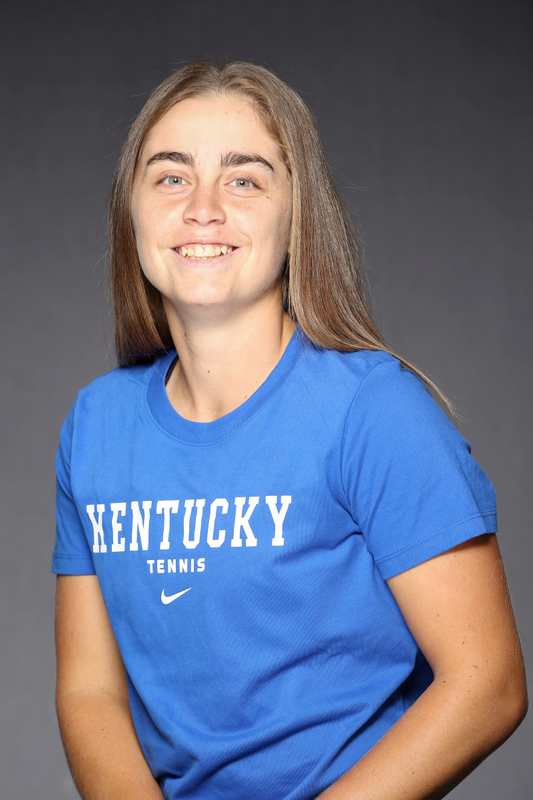 Junior (2021-22)
Recorded a 14-10 win in singles competition during her first season with the Wildcats, which was a team-high number of individual victories … Began the season playing in the fourth position, posting a 9-1 record on that court in addition to a 4-1 mark on court three before ending the year in the first spot … Had a big 7-6(3), 6-3 ranked win over No. 104 Safiya Carrington of LSU in the first round of the SEC Tournament to help UK advance to the second round … Posted a 6-7(2), 6-4, 6-3 comeback victory over Arkansas’ Indianna Spink … Topped Missouri’s Emelie Schwarte and Auburn’s Adeline Flach … Had a team-leading four clinching points as an individual … Earned the decisive point against West Virginia’s Momoko Nagato, Indiana’s Mila Mejic, Austin Peay’s Aleks Topalovic and Southeast Missouri State’s Myroslava Zelenchuk … Also had singles wins against Penn State’s Alexandra Nielsen, Western Kentucky’s Rachel Hermanova, Southeast Missouri State’s Ksenia Shikanova, Miami Ohio’s Catherine Denysiewicz-Slowek and twice defeated East Tennessee State’s Emilia Alfaro … Began the season paired with Fiona Arrese, tallying a 7-3 mark together … Notched ranked wins with Arrese over No. 27 Laura Masic/Lara Sschneider of Indiana and No. 43 Brindtha Ramasamy/Laura Rico of Miami Ohio … Clinched the doubles point with Arrese on two occasions versus Miami Ohio and Southeast Missouri State … Partnered with Carlota Molina for SEC doubles victories versus South Carolina’s Gracie Mulville/Misa Malkin and Missouri’s Valentina Vasquez/Elys Ventura … Had the clinching doubles point with Molina against Texas A&M’s Jeanette Mireles/Gianna Pielet as well as Florida’s Emma Shelton/Carly Briggs … During the fall season, posted four wins at the Tennessee Invitational, including three in singles action and one in doubles with Carlota Molina … Partnered with Molina for another doubles victory at the June Stewart Invitational … Had a pair of singles wins at the Miami Invitational.

Sophomore (2020-21 at Miami)
Finished 12-9 in singles and 14-8 in doubles … Paced Miami in doubles wins and doubles winning percentage (.636), as well as co-led the team in ACC doubles victories (seven) and winning percentage (.636) … Placed third on the team in combined singles/doubles wins (26) … Played as high as No. 3 in singles, but mainly held the No. 4 position … Tallied a 6-7 ledger in ACC competition … Went to a third set or super-tiebreaker 11 times, logging a 7-4 record … Clinched Miami’s victory over No. 8 Virginia by defeating Hibah Shaikh, 6-2, 4-6, 6-3 … Defeated Notre Dame’s Julia Lilien by a 6-4, 6-2 margin in the second round of the ACC Championship … Won 6-4, 6-3 against No. 16 Georgia Tech’s Carol Lee in the ACC Championship semifinals … Recorded a 7-4 ledger in ACC doubles play … Topped Basak Akbas/Kristina Miletic of No. 41 FIU in the NCAA Team Championship Round of 64 … Posted a 6-1 decision versus Nandini Sharma/Rebeka Stolmar at No. 9 UCF in the NCAA Team Championship second round.

Freshman (2019-20 at Miami)
Named an ITA Scholar Athlete … Enrolled at Miami during the spring semester, which was cut short due to COVID-19 … Posted a 9-2 ledger in singles and an 8-4 mark in doubles … Led the Hurricanes in doubles winning percentage (.667), while placing second in both singles winning percentage (.818) and combined singles/doubles winning percentage (.739) … Listed by UTR as the third-best Argentinian collegiate women’s tennis player, including first among freshmen … Went 6-2 in singles dual match action, mainly at the No. 4 spot, including 4-1 in ACC affairs with both losses coming against top-100 foes … Placed second on Miami’s roster in spring singles victories and tied for first in ACC singles triumphs.