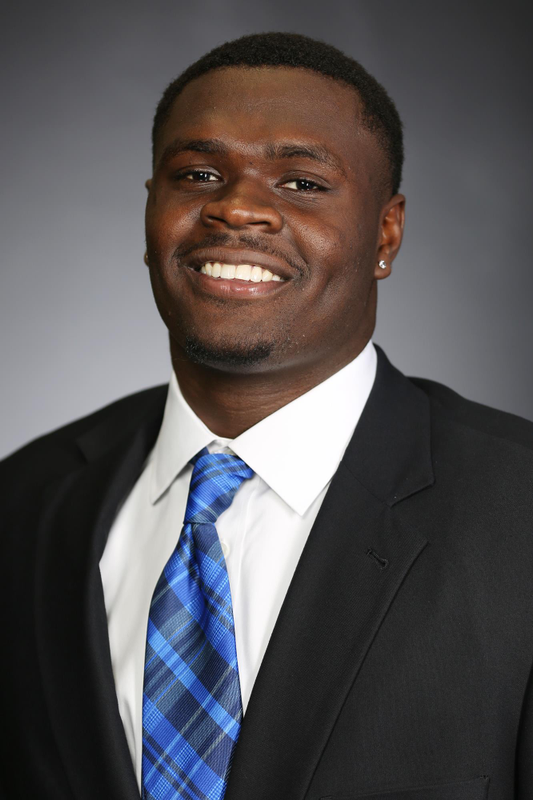 2022 – %Senior
• Team Captain
• Elected to return for a sixth year, taking advantage of the NCAA’s ruling to grant an extra year of eligibility due to the COVID-19 pandemic
• Has played in 42 career games with 12 starting assignments
• Has totaled 106 career tackles with 15.5 tackles for loss and 7.5 sacks … Also has 12 pass breakups, four forced fumbles, four fumble recoveries and six quarterback hurries

2021 – Senior
• Played in nine of 13 games in 2021, missing four with injury … Had seven starts
• Totaled 30 tackles, 4.0 tackles for loss, a sack, a quarterback hurry and six pass breakups
• Ranked 15th in the SEC in passes defended
• Led the Wildcats with a career-high 10 tackles in the win over Iowa in the Vrbo Citrus Bowl, including one for loss, and Ɵ pped the pass that led to D’Eryk Jackson’s interception
• Went out of the game late in the first half at Mississippi State with injury and did not return until the Louisville game on Nov. 27
• Had a career-high tying two PBUs in the road win over South Carolina
• Had six tackles, with a career-high-tying two tackles for loss (-9), an eight-yard sack and a pass breakup, vs. ULM in the season opener

2020 – Junior
• Started in 11 games in 2020
• Named SEC Defensive Player of the Week for win over Mississippi State
• Totaled 45 tackles, 5.5 TFL, 3.5 sacks, four PBUs, two QBHs, three forced fumbles, two fumble recoveries and an interception
• Named to SEC Fall Academic Honor Roll
• Had five tackles, including a 12-yard sack, and caused a fumble in the win over NC State in the TaxSlayer Gator Bowl
• Made four tackles, caused a fumble, recovered two fumbles, had two pass breakups and a quarterback hurry in Kentucky’s 41-18 win over South Carolina … His two turnover plays helped produce 10 Kentucky points … In the first quarter, he snatched the ball away from a Gamecock receiver and returned it four yards, setting up the first touchdown of the game … Recovered a fumble in the second quarter, setting up a field goal
• Recorded a career-high seven tackles vs. Georgia
• Was a key part of the Kentucky defense that held Mississippi State without an offensive score in UK’s 24-2 win … Game totals featured a pass interception returned for a touchdown; career-high tying six tackles; career-best two tackles for loss (-9 yards), including a quarterback sack; and a pass breakup

2019 – Sophomore
• Played in all 13 games
• Totaled 27 tackles, 6.0 TFL (Ɵ ed for third on the team), 3.0 sacks (fourth on the team), team-high tying two fumble recoveries one which resulted in a touchdown, one forced fumble, one PBU and a quarterback hurry
• Put the icing on the cake in the win over Virginia Tech in the Belk Bowl with a 28-yard fumble return for a TD on the game’s final play … Also had three tackles, including one for loss, and a pass breakup
• Totaled a career-best six tackles and a tackle for loss in the season opener vs. Toledo

2018 – r-Freshman
• Saw action in nine games, totaling four tackles
• Charted a career-high three tackles vs. Murray State, along with a pass breakup and QBH
• Also had a QBH in the win over Vanderbilt

High School
• Dual-sport standout in football and basketball
• A three-star football recruit
• Rivals ranked him as the 25th-best defensive end and the 80th-best prospect in Florida, while 247Sports had him as the No. 28 weakside defensive end in the country and the No. 67 player in the state of Florida
• The 46th-best DE in the class of 2017 by ESPN
• Coached by Lorenzo Davis
• Compiled 25 sacks as a senior
• Doubled as a tight end in the red zone, catching six touchdowns, including a critical score against Boynton Beach in the District 15-6A three-team tiebreaker to lead Dillard to the district title
• Earned Sun Sentinel’s All-Broward first-team defensive honors
• As a shooting guard, was a back-to-back preseason Fab Five selection and was an All-County pick
• Led the Panthers’ hoops team to a Class 6A state title as a junior
• Named Mr. Dillard High School
• Chose Kentucky over Miami, Arkansas and Florida

Personal
• Born in Lauderhill, Florida
• Son of Wanda Burns-Wright and Louis Wright
• Has one sister, Kayla
• Comes from an athletic family as older sister, Kayla, played basketball at Nova Southeastern, while cousin, RaiQuan Gray, currently plays basketball at Florida State, and another cousin, Kenneth Ruff , was a defensive lineman at Syracuse
• Graduated on December 17, 2021 with a degree in community and leadership development… Currently working on a second degree in kinesiology

Jordan Says
• His nickname is “Jay Dub”
• He chose Kentucky because it was a perfect fit for himself and his family, and it felt like home
• His sports heroes are his parents because they push him to be the best he can be
• Other than play in the NFL, his dream job is to be a sports trainer
• One word to describe him on the fi eld is “beast”