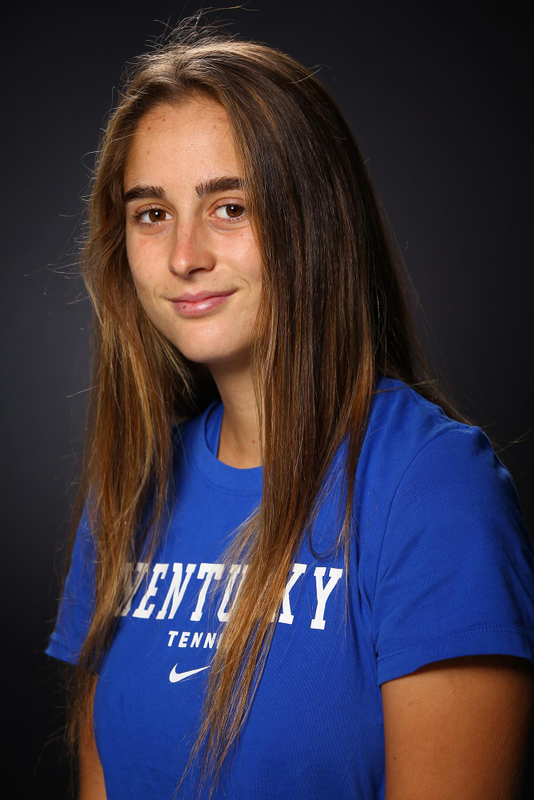 Junior (2021-22)
Named the SEC Co-Player of the Week on Feb. 23 … Started the year ranked 100th in singles before moving up to as high as 89th on Feb. 24 … Recorded a ledger of 7-12 in singles competition while playing on the first three courts … Defeated LSU’s Nina Geissler in the first round of the SEC Tournament to help UK advance to the second round … Topped No. 58 Marlee Zein of Florida in impressive 6-4, 3-6, 6-2 fashion, also besting SEC foe Magda Adaloglou of Mississippi State … Had a big 7-6(4), 6-3 ranked win over No. 21 Isabella Boulais of Ohio State … Picked up additional singles wins over Indiana’s Lara Schneider, Notre Dame’s Yashna Yellayi and Southeast Missouri’s Myroslava Zelenchuk … Partnered with Lidia Gonzalez for a 6-4 ledger in doubles in the third spot, earning the clinching point over Ohio State, Indiana and West Virginia … Also had doubles wins with Gonzalez against Penn State, Miami Ohio, Western Kentucky … Partnered with Florencia Urrutia for SEC doubles victories versus South Carolina’s Gracie Mulville/Misa Malkin and Missouri’s Valentina Vasquez/Elys Ventura … Had the clinching doubles point with Urrutia against Texas A&M’s Jeanette Mireles/Gianna Pielet as well as Florida’s Emma Shelton/Carly Briggs … Was ranked as high as 51st in doubles with Elizabeth Stevens on Feb. 9, picking up a doubles win over Southeast Missouri … Also notched a dub in doubles with Maialen Morante versus Bellarmine for the decisive point … During the fall season, teamed up with Florencia Urrutia to post a doubles victory at the June Stewart Invitational … Along with Lizzy Stevens, advanced to the doubles main draw finals at the ITA Regional Championships before falling to Indiana, 6-3, 6-2 … Also qualified for the singles main draw Round of 32 at the ITA Regional Championships … Had a trio of wins at the Tennessee Invitational and two victories at the Miami Invitational.

Sophomore (2020-21)
Named to the SEC Academic Honor Roll … Earned SEC Newcomer of the Week honors on March 3 … Amassed a 12-8 record during singles play … Began the season at 7-0 with singles wins over East Tennessee State, Memphis, Miami Ohio, Cincinnati, Middle Tennessee State, Marshall, and Notre Dame … Posted four SEC victories against Alabama, Auburn, Missouri, and Texas A&M during the regular season … Defeated Tereza Janatova of Ole Miss 7-6, 7-3 during the second round of the SEC Championships, giving UK crucial points to upset the No. 19 Rebels … Teamed up with Carla Girbau for a 6-1 and 6-3 doubles victory over Miami Ohio and Cincinnati, respectively … Posted a 6-2, 1-6, 6-4 win over Tennessee’s Daria Kuczer at the June Stewart Invitational during the fall season.

Freshman (2019-20)
Named to the SEC First-Year Academic Honor Roll … Recorded a 5-1 singles record and a 6-2 doubles record when paired with Anastasia and Diana Tkachenko during fall action … In her collegiate debut, defeated three singles opponents to win the Wildcat Invite main singles draw … Molina was one of three teammates to go unbeaten in their final fall tournament of the season at the Kentucky Invite, recording three doubles wins and two singles wins (round-robin, hidden-dual format) … Molina and teammate Anastasia Tkachenko did not drop a doubles match together during the fall, going 3-0 … During the dual season, Molina put together a 9-4 singles record, including a 1-3 singles record in the conference … Molina competed mostly on the third singles court during the dual season … She also has a perfect 2-0 record against nationally ranked foes, defeating then-No. 68 Sydney Van Alphen of then-No. 11 USC, 6-3, 6-2 and then-No. 88 Katarina Kopcalic of then-No. 17 Washington, 2-6, 7-5, -4, both during the ITA Kick-Off Weekend at Washington … Remarkably, she began the dual season with an 8-0 singles record … In the doubles competition during the dual season, Molina posted a 6-2 doubles record, including a 1-3 doubles record in the conference … Season was cut short on Thursday, March 12 due to the COVID-19 public health threat.