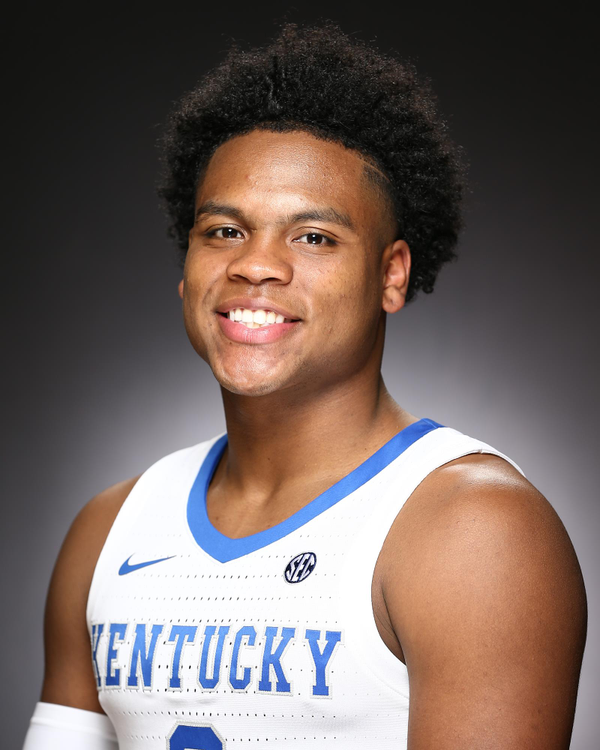 2021-22
Junior: Bob Cousy Award finalist for the nation’s best point guard … All-SEC Second Team by both the league’s coaches and the media … Third in the nation and first in the SEC for the second straight season with an average of 6.9 assists per game … Finished with 207 assists on the season which is the fourth most in a single season in UK history … That mark was also a career high … Was second in the SEC with a 2.27 assist-to-turnover ratio … Totaled 12 games with at least eight assists and had five or more in 12 of the final 13 games of the season … Scored in double figures in 16 outings … Totaled a pair of double-doubles in the points-assists variety … Had a career low in turnovers … Shot 78% from the free-throw line, the best mark of his career … Produced 28 games with at least three assists and led the team in that category 25 times … Started 29 of the 30 games he played … Missed four games due to injury … Averaged 10.1 points, 6.9 assists, 2.6 rebounds and 1.1 steals per game … Had 11 points and a team-high six assists in the NCAA Tournament … Logged 10 points and six rebounds against Tennessee in the SEC Tournament semifinals … Produced eight points and 11 assists in the SEC Tournament quarterfinals win against Vanderbilt … Scored 13 points, had five assists and two steals in the win at Florida … Logged 16 points and seven assists in the win over Ole Miss … Had 14 points and five assists at Arkansas after missing two games with an injury … Had 11 assists and four rebounds in the win at South Carolina … Totaled seven points, eight assists and three rebounds in the win at Kansas … Scored 15 points and chipped in with six assists in the overtime win over Mississippi State … Was the team’s leading scorer with 17 points at Auburn … Had 21 points, eight assists and two steals following a two-game absence due to injury in the historic win over Tennessee at home … Logged 11 points and nine assists in the SEC regular-season opener vs. Missouri … Scored a season-high 26 points to couple with eight assists and a season-best four steals in the win over North Carolina … Was named the SEC Player of the Week and the NCAA March Madness National Player of the Week following the performance … Tallied 12 points and a career-high 14 assists in the win over North Florida for his second double-double … Logged 16 points and 10 assists in his season debut against Duke in the Champions Classic.

2019-20 (at Georgia)
Freshman: Appeared in all 31 games as a freshman at Georgia … Made 17 starts … Set Georgia’s freshman assists record with 139 dimes, topping the old mark of 133 set by Litterial Green in 1989 … Averaged 9.0 points, 4.5 assists and 2.5 rebounds per game … 11 double-figure scoring games … Ranked 87th nationally in assists per game and also sixth among freshmen … Fourth in the SEC in assists per game … Earned SEC Freshman of the Week honors on Dec. 23 … Sunk a halfcourt buzzer-beater in the SEC Tournament, which was the No. 1 moment on Sportscenter’s Top 10 plays … Had a season-high 24 points in an overtime loss to Alabama …  Logged 16 points at Florida … Had a pair of layups at the end of both overtimes against SMU … Scored with four seconds remaining in the first overtime period to tie the game and then scored again with 1.9 seconds to go in the second overtime to secure the win vs. SMU … Posted nine points and eight assists in that win over the Mustangs … Scored 19 points in the season opener against Western Carolina, equaling the third-most points ever scored by a freshman in program history … It trailed only Dominique Wilkins (26) and Anthony Edwards (24).

HIGH SCHOOL
Two-time state champion at Houston Christian High School in Houston … High school squad combined to go 61-13 in 2018 and 2019 … All-time steals and assists leader … School record holder for points in a game (47), assists (18) and 3s (10) … Selected as the co-MVP of the 2019 Big Baller Brand All-America Game, where he posted 34 points and dished out eight assists … Named the Houston Private School MVP by the Houston Chronicle … Four-time All-State selection … Three-time team MVP … Was a four-star recruit … Ranked the No. 78 player by ESPN, No. 88 by Rivals and No. 93 by 247Sports in his signing class.

PERSONAL
Born Jan. 17 in New York … Pursuing a degree in communication … Parents are Teddy and Jacqueline Wheeler … Has five siblings, Sage, Montana, Lincoln, Lola and Liv … An uncle, Bernard Wheeler, played basketball at the University at Buffalo … Chose his jersey number because it was the first number he received in any sport … Favorite movies are The Dark Knight and The Dark Knight Rises … Pregame superstitious include taking a shower before leaving for the arena and listening to music … His favorite food is chicken wings … Lists Kobe Bryant as his favorite basketball player … His dad has been his life’s greatest influence … Dunked for the first time at age 17 at the Houston Christian High School practice gym … Chose Kentucky over Kansas, Oklahoma State and LSU.