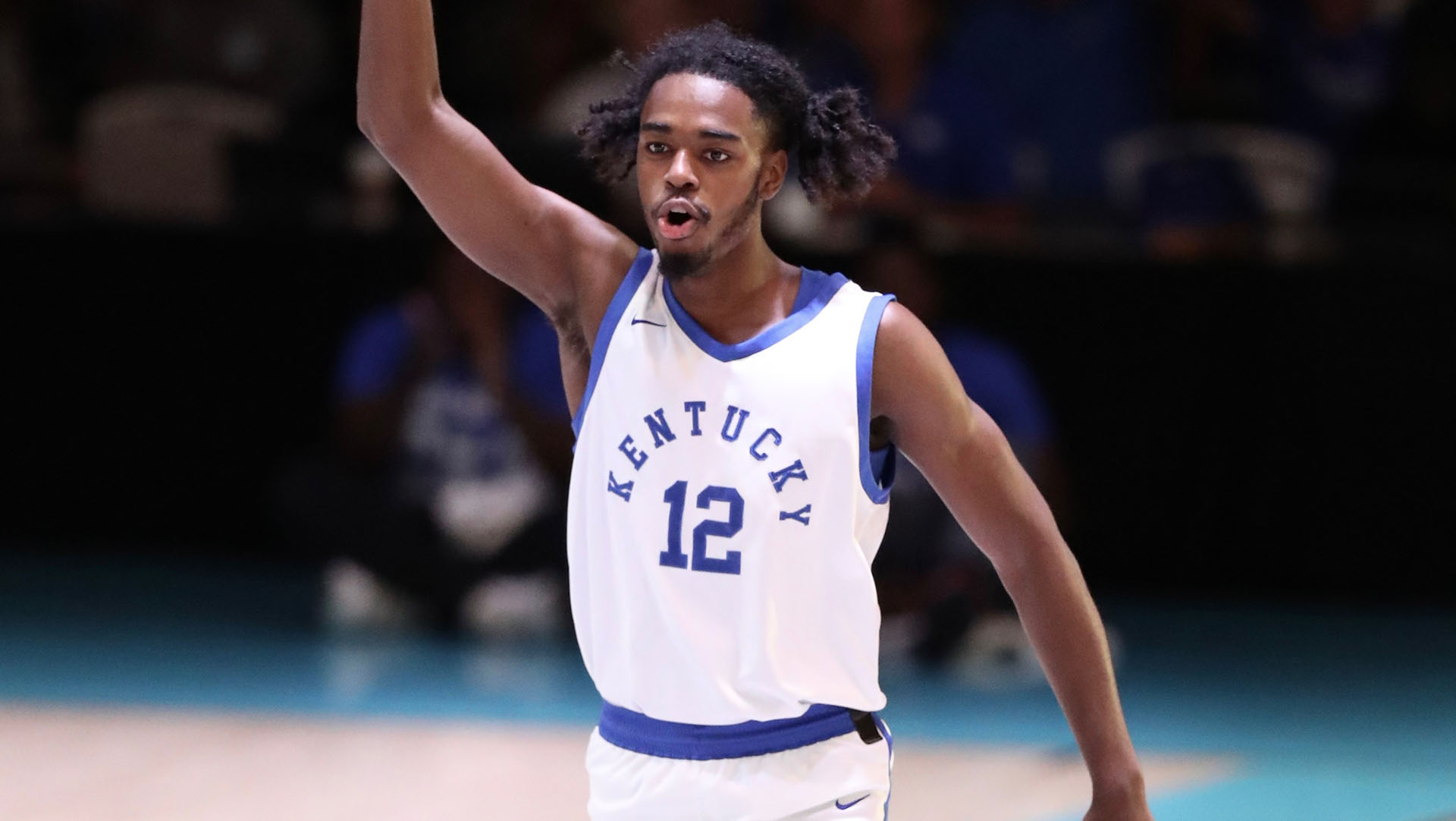 NASSAU, Bahamas – The temperature outside may have been hot in Nassau on Saturday, but it wasn’t as hot as the Kentucky Wildcats were inside the Baha Mar Resort.

Jacob Toppin led the charge for the Cats, making 11 of his 14 shots, including five of six from long range, on his way to 27 points. Toppin added six assists, two steals and a pair of rebounds in the game. Antonio Reeves was also hot, making five of eight from behind the arc on his way to 23 points.

Kentucky, which won in blowout fashion for the third straight game, got 17 points and six assists from Sahvir Wheeler, while Cason Wallace had 15 points, five steals, four assists and three rebounds. Oscar Tshiebwe had just eight points but did grab 13 rebounds in 22 minutes of action.

Kentucky got on the board first on a Wallace dunk and the Cats extended the lead to4-0 on a Jacob Toppin jumper. Carleton would answer with four in a row to tie the game.

It wouldn’t be tied for long. Just 13 seconds into the tie, UK got a CJ Fredrick basket and free throw, followed by dunks from Tshiebwe and Wallace. Tshiebwe would convert a layup to complete the 9-0 run that gave the Cats a 13-4 advantage.

Carleton would get a basket to stop the bleeding, but the respite didn’t last long. The Cats would mount another run, this one 10-0, to extend the lead to 23-6. Reeves sparked this spurt with a pair of threes and a dunk, accounting for the final eight points in the stretch.

Kentucky would outscore Carleton 51-15 to end the first half, with four Cats (Reeves, Toppin and Wheeler) each reaching double figures in scoring in the first 20 minutes.

While the offensive numbers were impressive, it was Kentucky’s defense the turned this game into a blowout in the first 20 minutes. Kentucky forced 16 Carleton turnovers in the first half and scored 25 points off those miscues. UK held Carleton to eight for 31 (25.8 percent) shooting from the floor, including just one of 11 (9.1 percent) from behind the arc.

Kentucky shot the ball extremely well in the second half, hitting 11 of their first 15 from behind the arc to blow this game wide open.

Kentucky completes its four-game set in the Bahamas by facing the host nation in Sunday’s finale. The Cats and the Bahamian National Select Team will face off at noon on Sunday in a game that can be seen on the SEC Network.