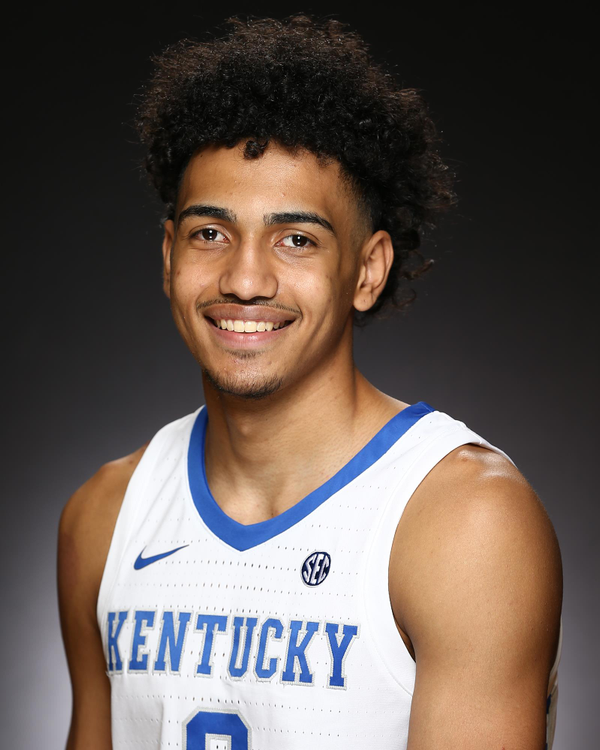 2021-22
Junior: Named to the Southeastern Conference Winter Academic Honor Roll … Saw action in 29 games and made four starts in his second season with the Wildcats … Averaged 6.2 points and 3.2 rebounds per game in 17.7 minutes … Missed five games due to injury … Scored in double figures in seven games … Had career highs in scoring, blocks, assists, field-goal percentage and 3-point field-goal percentage … Averaged 7.6 points and 4.1 rebounds per game over his final seven games of the regular season … Tallied nine points with a trio of dunks and three points from the charity stripe against Saint Peter’s in the NCAA Tournament … Logged 10 points and three blocks in the SEC Tournament quarterfinals against Vanderbilt … Contributed eight points and six rebounds in 39 minutes of the win over LSU at home … Had 13 points, six boards and three assists in a career-high 40 minutes in the home victory over Alabama … Tallied 11 points and contributed six rebounds at Tennessee … Scored 10 points and had three rebounds in just six minutes at South Carolina before injuring an ankle … Logged 11 points and three rebounds in the win at Kansas … Contributed nine points, six boards, two assists, a block and a steal in the come-from-behind win at Texas A&M … Had season highs with 14 points and eight rebounds at LSU … Notched 12 points and a career-high six assists in the win over Western Kentucky … Had seven points, five rebounds and three assists in a win against North Carolina … Had seven points in the win over Central Michigan … Made his season debut after missing much of the preseason with a shoulder injury against Duke in the Champions Classic with four points and six rebounds.

2020-21
Sophomore: Southeastern Conference First-Year Academic Honor Roll member … Appeared in 24 of 25 games with two starts … Originally slated to redshirt in 2020-21, became a key player off the bench for the Wildcats, impacting the game in key spurts in the scoring column and on the boards … Averaged 5.2 points and 3.5 rebounds on the season … Four games in double-figure scoring … Made a greater impact as the season progressed, averaging 7.7 points and 4.4 rebounds in 23.0 minutes over the final seven regular-season games … Came up with a career-high three steals in addition to five boards at Ole Miss … Scored 11 points in 21 minutes in the home loss to Florida … Recorded a career-high 16 points on 5-of-9 shooting in 23 minutes at Vanderbilt … Totaled five points and a season-high seven rebounds in the home victory vs. Auburn … Solid game vs. Arkansas with nine points and six rebounds … Provided a spark in the loss at Auburn with 10 points and six rebounds … Six rebounds to go along with five points in the home loss to Alabama … Posted six points and six boards in the home win vs. Vanderbilt … Went for 10 points and six rebounds in the narrow loss at rival Louisville … Posted six points and three rebounds vs. No. 7/5 Kansas.

PERSONAL
Born May 8 in Brooklyn, New York … Parents are Roni and Obadiah Toppin … Has a brother, Obi, who was the consensus National Player of the Year in 2020 for Dayton and current New York Knick … Major is communication … Chose Kentucky over Oregon and Iowa State … Lists his mother as his greatest influence … Most memorable moment as a basketball player is playing against his brother during his freshman season of college at Rhode Island … Chose No. 0 because it’s always been his number … Favorite food is Italian … Pregame superstition is eating candy … Off the court hobbies include playing video games … Can play the piano.