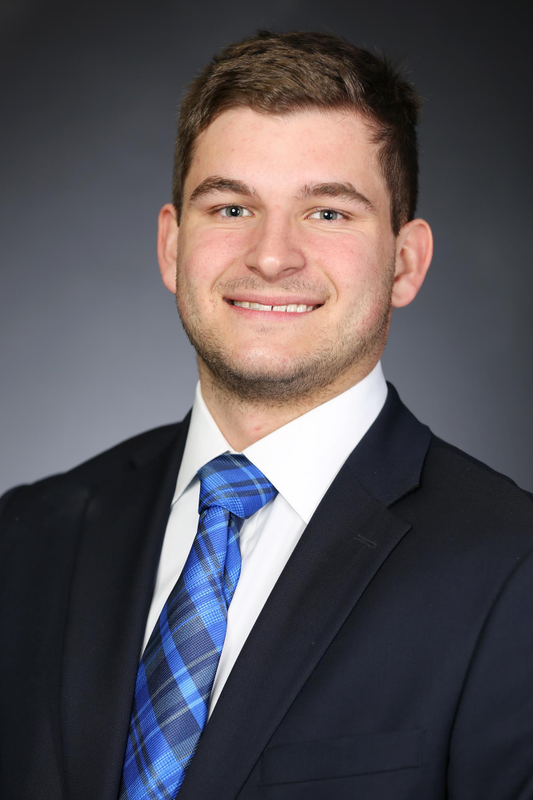 2022 – %Super Senior
• Ray Guy Award Watch List for nation’s top punter
• Burlsworth Trophy nominee
• Named to SEC Fall Academic Honor Roll
• Dean’s List (Spring 2022, Fall 2022)
• Semifinalist for the Campbell Trophy Watch List, premier scholar-athlete award
• Preseason Fourth-Team All-SEC (Phil Steele)
• Elected to return for a sixth year, taking advantage of the NCAA’s ruling to grant an extra year of eligibility due to the COVID-19 pandemic
• Had 32 punts for 1,328 yards (41.5) in nine games
• Had a season-high six punts for 238 yards at Missouri … Made a game-saving play late in the game to help preserve Kentucky’s win … With UK clinging to a 21-17 lead and 2:34 remaining, the Wildcats faced 4th-and-4 at their own 41-yard line .. The punt snap went over his head, he raced back to the five-yard line and — in one motion – scooped the bouncing ball, whirled and punted while being hit hard by a Missouri player, drawing a roughing-the-punter penalty. Instead of Missouri taking over the UK 35-yard line, the Wildcats kept the ball with a first down and ran out all but 38 seconds of the clock
• Suffered a season-ending knee injury vs. Missouri

2021 – Senior
• Second-team CoSIDA Academic All-American
• First-team CoSIDA Academic All-District
• Dean’s List (Spring 2021, Fall 2021)
• Named to SEC Fall Academic Honor Roll
• Ray Guy Award Watch List (nation’s best punter)
• Ranked third in the SEC in punting with a 45.94 average in 10 games
• Had the second-highest season average for punting in school history
• Had 35 punts for 1,608 yards with a long of 70
• Kicked three times for a 53.7-yard average at Mississippi State … Second straight game he had a career-long 70 yarder, becoming the first player in school history to have two punts of at least 70 yards during his career
• Punted seven times for a 51.1-yard average at No. 1 Georgia, including the two longest of his career – a 63-yarder in the second quarter, followed by a 70-yarder in the third quarter
• Made his first appearance of the season vs. UTC and punted four times for a 50.5-yard average, including two that were inside the opponent 20-yard line
• Punted three times a 45.7-yard average, including two punts inside the 20-yard line vs. LSU … LSU did not have any punt return yardage and the Tigers’ average starting yard line following his punts was its own 15

2020 – Senior
• Dean’s List (Spring 2020, Fall 2020)
• Named to SEC Fall Academic Honor Roll
• Starting punter vs. Vanderbilt and Alabama and totaled 10 punts for 477 yards with a 47.7 yards per punt average
• Saw his first collegiate action vs. Vanderbilt, punting three times for a 46.3-yard average, and there were no return yards
• Punted seven times for 48.3 yards per kick at Alabama … Nailed a career-long 55-yarder and placed two inside the 20

2017 – Freshman
• Practiced with the team
• Dean’s List (Fall 2017) High School
• Three-year letter winner and starter at punter for St. Ignatius in Cleveland
• Averaged 41.1 yards per punt as a senior, helping the Wildcats finish 13-2
• Kept nine punts inside the 20-yard line and allowed only three touchbacks
• Also handled kickoff s, sending 61-of-87 to the end zone
• Named to Cleveland.com’s 2016 all-star football team
• Was a two-time first-team All-County and two-time All-State selection
• Coached by Chuck Kyle
• Also a two-year letter winner as a guard on the basketball team
• Member of the National Honor Society
• 1st Honors (2016 and 2015), 2nd Honors (2014 and 2013)
• Chose Kentucky over Penn State and Pittsburgh

Community Cats
• Volunteered with God’s Pantry each Monday, picking up and delivering crates of food (2021)
• Volunteered each Friday of the school year to help younger nursing students work on their first aid skills (2021)
• Helped make blankets for Project Linus-Home, a non-profit organization which provides handmade blankets to children in need (2020)

Personal
• Born in Cleveland, Ohio
• Son of Kathy and Don
• Siblings are Alex, Christina, Eric, and Julianne
• Father, Don, played basketball at Case Western and sister, Christina, played soccer at Duquesne
• Graduated in May of 2021 with a nursing degree and is currently working on a second degree in kinesiology and health promotion

Colin Says
• His nickname is “Goody ”
• He chose Kentucky because it would allow him to study nursing and play football
• Other than playing in the NFL, his dream job is to be a certified registered nurse anesthetist
• When he played football as a kid he pretended to be Phil Dawson
• One thing most people don’t know about him is that he’s in nursing school