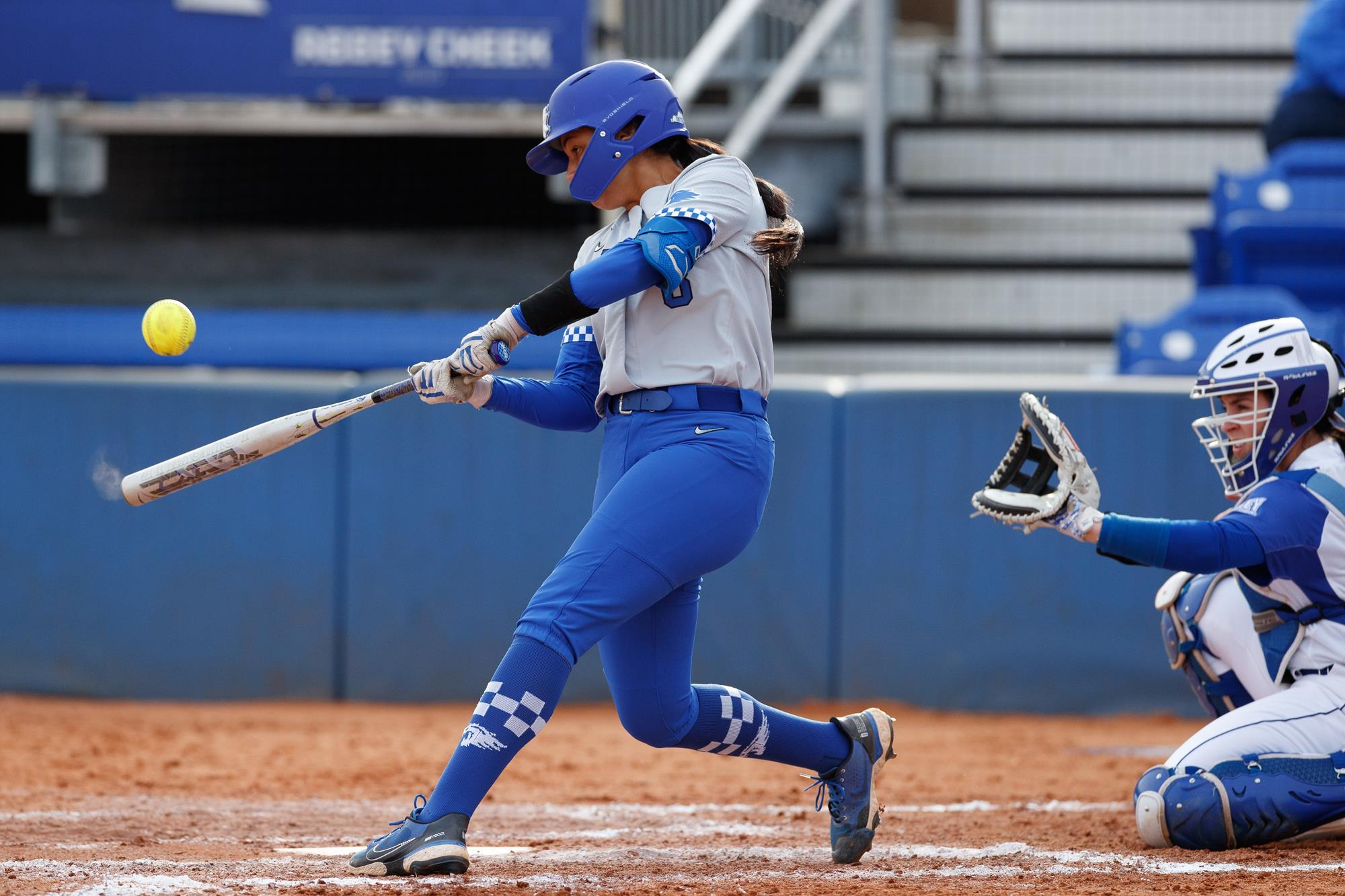 Sullivan and Stoddard Hit No. 10 UK Past Drake, No. 19 Michigan

LEXINGTON, Ky. – The No. 10 Kentucky Softball team went 2-0 on Friday at the 2022 John Cropp Classic thanks to the hitting of senior Kennedy Sullivan and junior Miranda Stoddard as the Wildcats powered past Drake 10-5 and No. 19 Michigan, 9-2.

With the two wins, Kentucky is now 2-1 on the weekend and will close out the tournament Saturday afternoon at 3 p.m. ET against the Kent State Golden Flashes. The game will be broadcasted on the SEC Network+, ESPN3 and the ESPN app with Dave Baker and former Arizona All-American Jenny-Dalton-Hill on the call from JCS.

In game one, Kentucky used a three-run home run from Kennedy Sullivan and multi-RBI games from Kayla Kowalik and Taylor Ebbs to fly past the Drake Bulldogs, 10-5. Alexia Lacatena pitched 5.1 innings and picked up the win, allowing just three runs and recording a strikeout in the game.

In Kentucky’s win over No. 19 Michigan, Miranda Stoddard hit a grand slam in the bottom of the third inning and pitched a complete game with three strikeouts and allowing just two runs. The Wildcats and Wolverines split the season series with each team winning a game.

Kentucky improves to 15-2 on the season through play Friday. Drake ended the day 4-7 and Michigan fell to 12-6 after the win over Kent State and the loss to UK.

Game 1 – Kentucky 10, Drake 5
Key Play
Kennedy Sullivan’s three-run home run in the bottom of the sixth inning was the key play of the game.

Key Player
Lauren Johnson was 2-for-3 with two runs scored in the game.

Key Stat
3. There were three Wildcats, Alexia Lacatena, Kayla Kowalik and Lauren Johnson who all had multi-hit games for UK.

Run Recap
Kentucky scored two in the bottom of the first inning thanks to a Taylor Ebbs RBI hit to give UK the lead. UK 2, DU 1

Two more runs came across for the Big Blue in the second as Johnson and Kowalik both had RBI hits. UK 4, DU 1

Drake scored on back-to-back doubles in the top of the third. UK 4, DU 2

Kayla Kowalik singled to score Vanessa Nesby and a wild pitch plated another run as UK made it 6-2. UK 6, DU 2

In the top of the sixth, Drake crept closer with a sac fly. UK 6, DU 3

Kennedy Sullivan hit a home run with Rylea Smith and Erin Coffel on the bases to give UK three runs. UK 10, DU 5

The Bullgogs scored a pair in the seventh, but Miranda Stoddard came in to shut the door. FINAL – Kentucky 10, Drake 5

Game 2 – Kentucky 9, Michigan 2
Key Play
Miranda Stoddard’s grand slam in the bottom of the third inning was the key play in the game. Kentucky was leading 3-1 and Stoddard’s second HR of the season made it a 7-1 lead for the Wildcats.

Key Player
Miranda Stoddard was the key player in the game, going the distance with two runs allowed on nine hits and striking out three. She also had the grand slam at the plate, driving in four critical runs.

Run Recap
Michigan got back-to-back two-out doubles in the top of the first to score the opening run of the game. UM 1, UK 0

Kayla Kowalik led off the bottom of the first with a double to left center and scored on a Lauren Johnson RBI single. Kennedy Sullivan then hit her second HR of the day to put the Wildcats up. UK 3, UM 1

With the bases loaded in the bottom of the third, Miranda Stoddard hit her second homer of the season, a grand slam to left-center to put UK up six runs. UK 7, UM 1

Michigan got a run in the top of the fifth on an RBI groundout from Kristina Burkhart following a lead-off double. UK 7, UM 2

Kentucky responded with a run of its own in the bottom of the fifth as Sullivan’s lead-off single turned into a run after a throwing error on the Wolverines. UK 8, UM 2

In the bottom of the sixth, Kentucky scored as a ball got to the backstop with Lauren Johnson on third. FINAL – Kentucky 9, Michigan 2