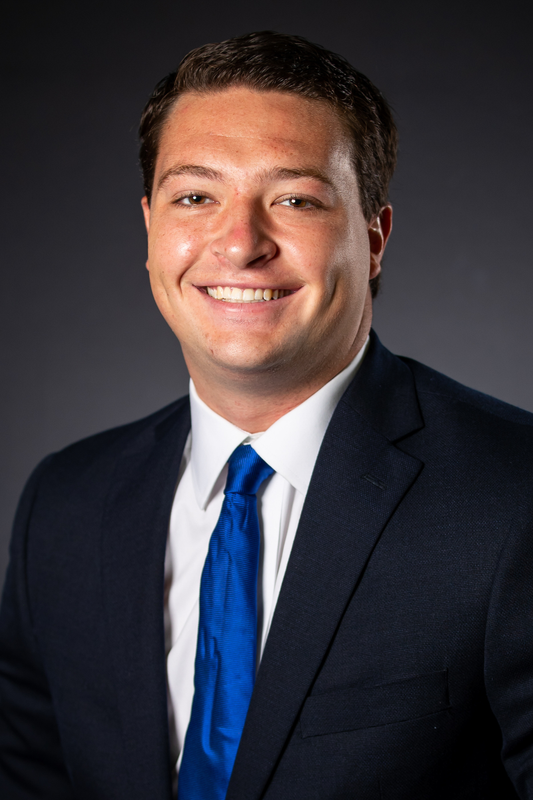 Career
• Four-year letterwinner
• Career totals included 42-of-56 field goals and 119-of-126 extra points
• Totaled 245 points, the eighth player in school history to reach 200 career points
• No. 5 on UK’s all-time scoring list
• Graduated in May of 2021 with a degree in finance .. Graduated in May of 2022 with his MBA at UK’s Gatton College of Business and Economics

2022 – %Senior
• Elected to return for a sixth year, taking advantage of the NCAA’s ruling to grant an extra year of eligibility due to the COVID-19 pandemic
• Hit 16-of-24 field goals and 25-of-27 extra points for a team-high 73 points
• Ranked fourth in the SEC in field goals made (16)
• Made field goals of 43, 29, 35 and 40 yards, and two extra points in the win over Louisville … Named winner of the Howard Schnellenberger Award as  the Most Valuable Player for the winning team of the Governor’s Cup game, the first kicker to win the honor since it was founded in 2010 … His four field goals in a game were a career best and tied the Governor’s Cup record … Became the first Wildcat with four field goals in a game since Austin MacGinnis vs. Missouri in 2017
• Made three field goals from 34, 25 and 50 yards, respectively in the win over Miami (Ohio) in the season opener … His 50-yard field goal in the third quarter tied his career long … third time in his career he has made a field goal from 50 yards
• Earmed a Lou Groza Award Star of the Week for his performance in the season opener
• Made 2-of-3 field goal attempts, including the game-sealing 26-yarder with 1:24 remaining at Florida

2021 – Senior
• Lou Groza Award Watch List (nation’s top place kicker)
• Burlsworthy Trophy nominee (award presented annually to the most outstanding player who began his career as a walk-on)
• CoSIDA Academic All-District First Team
• Hit 10-of-12 fi eld goals and 54-of-56 extra points for 84 points, fifth-most on the single-season chart
• His 54 extra points are a single-season school record, previously held by Lones Seiber (51 in 2007)
• Has a streak of five consecutive field goals, dating back to Nov. 13 at Vanderbilt (2-2 vs. Vandy, 1-1 at Louisville, 2-2 Iowa)
• Named to SEC Fall Academic Honor Roll

2020 – Senior
• Hit 22-of-23 extra points and 12-of-14 fi eld goal attempts, totaling 58 points, UK’s second-leading scorer
• Set a UK bowl record with three fi eld goals, from 25, 26 and 20 yards, in the win over NC State in the TaxSlayer Gator Bowl
• Made all of his kicks in the win over South Carolina, including fi eld goals of 22 and 41 yards, along with all five extra points
• Connected a 50-yard fi eld goal in the second quarter at Missouri, tying his career long set last season vs. Arkansas
• Scored 10 points in Kentucky’s 34-7 win at No. 18/17-ranked Tennessee … Made a then-career-high 2-of-2 fi eld goals, from 30 and 27 yards … Also made all four extra points
• Named to SEC Fall Academic Honor Roll

High School
• Two-year starter and letter winner at kicker for Archbishop Alter
• Coached by Ed Domsitz
• Did not miss an extra point for two straight seasons (2016 and 2015)
• Ranks second all-Ɵ me in Ohio for consecutive PATs made with 103
• Hit 4 of 5 fi eld goals, 79 of 79 PATs, 73 of 85 kicks were touchbacks and averaged 40.0 yards per punt as a senior
• Helped the Knights finish as conference champs and state runner-up with a 13-1 record in 2016
• Named to the All-Greater Catholic League First Team and was named to the Miami Valley Football Coaches Association (MVFCA) All-Star Team
• Honorable mention Southwest Ohio
• Member of the National Honor Society, graduating with honors
• Member of the Student Council, Key Club, University Club and German Club
• Chose UK over Dayton, Ball State and Toledo

Personal
• Born in Dayton, Ohio
• Son of John and Susie Ruffolo
• Sister, Kara, played soccer at Loyola, while brother, Michael, was a kicker at Dayton

Matt Says
• His nickname is “Big Foot”
• Other than playing for the NFL, his dream job is to be a CFO of a company
• The three people he would invite to his fantasy dinner are Peyton Manning, Donald Trump and Pat McAfee
• If he could create a holiday he would call it “National Spicy Italian Meatball Day” and everyone would eat meatballs