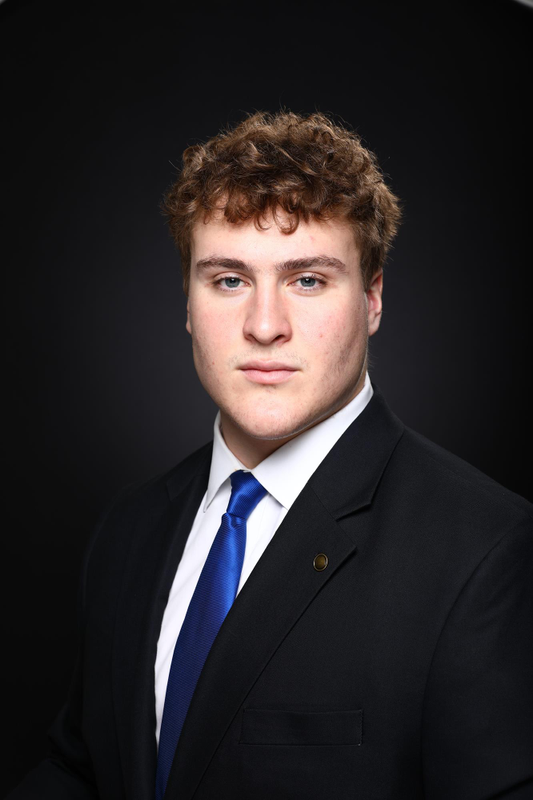 High School
• A four-star offensive lineman who was rated as one of the nation’s top-10 offensive guard prospects by 247, Rivals and ESPN
• The No. 1 prospect in Kentucky by Rivals and 247sports
• The No. 66 national prospect by 247sports and No. 200 nationally by Rivals
• An all-around talent known for his combination of athleticism, footwork, playing intensity and notable strength for a high school player
• Winner of the 2020 Paul Hornung Award, chosen by the Louisville Quarterback Club, as the top high school player in Kentucky … Only the third offensive lineman to win the award
• Named Co-Mr. Football in the state of Kentucky in 2020 by The Associated Press … First Lexington player and first offensive lineman to take the honor since its inception in 1986
• Selected to the prestigious All-American Bowl, held annually in San Antonio, Texas
• A four-year letter winner and three-year starter for head coach Brian Landis and Nathan McPeek
• A two-way player who played both offensive tackle and defensive end
• Helped Frederick Douglass finish 7-2 as a senior, reaching the Class 5A state semifinals
• Anchored a line that helped the Broncos average 38.7 points and 323 yards per game
• As a defensive lineman, had a 33-yard interception return for a touchdown against Ballard
• Named first-team all-state by the AP, Louisville Courier-Journal and Kentucky Sports Radio
• Named to the Lexington Herald-Leader “Class of the Commonwealth” list of the top seniors in KY
• Named a finalist for the 2020 Sports Illustrated All-America team
• As a junior, helped lead the Broncos to a 14-1 record and state runner-up position in Class AAAAA
• Earned a spot on the Courier Journal’s All-State First Team in 2019 as well
• In his four-year prep career, Fredrick Douglass totaled a 44-6 overall record
• Chose Kentucky over Alabama, Clemson, Ohio State and Oregon
• Was an academic honor roll student
• Also lettered one season as a midfielder in lacrosse

Jager Says
• His nickname is “Moose”
• Other than play in the NFL, his dream job is to own his own restaurant
• One word to describe him on the field is “aggressive”
• The person he most admires is his dad because he made him a man
• He chose Kentucky because it was home and he wanted to help continue building this program