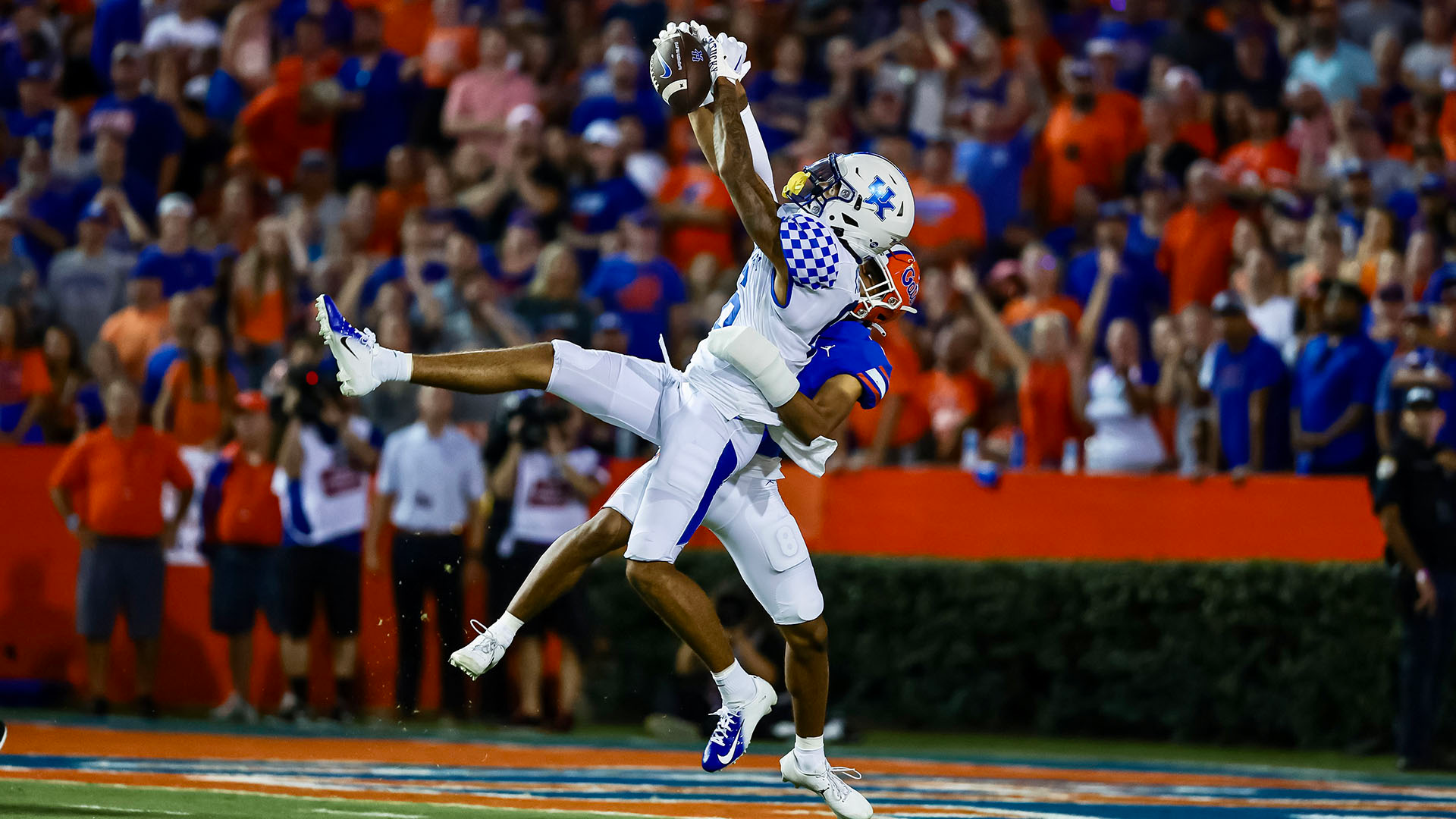 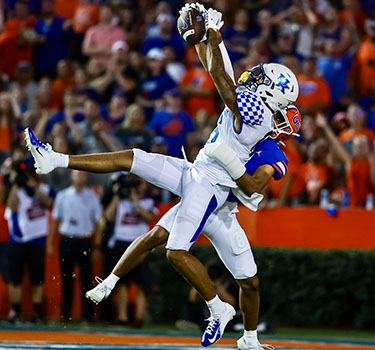 It was the Kentucky defense that came up large all night long. The Cats held Florida to 279 yards of total offense and kept Florida’s talented quarterback Anthony Richardson in check. UK’s defense also came up with a pair of huge interceptions, both of which defined the outcome of Saturday’s win.

Kentucky (2-0) struggled offensively but made enough plays to get the win. Quarterback Will Levis connected on 13 of 24 through the air for 202 yards and a touchdown. Kavosiey Smoke carried the ball 14 times for 80 yards, most of which came in the second half.

Florida had the opening possession of the game but, after one first down, the Gators were forced to punt. On Kentucky’s first possession, the Cats went three-and-out, punting the ball back to Florida.

The Gators took over on their own 48 and quickly got into UK territory. However, the UK defense held, forcing Florida into a field goal attempt. Adam Mihalek converted the 39-yard attempt and the Gators grabbed a 3-0 lead with 10:03 left in the first quarter.

The Cats would put together another drive as the first quarter was winding down. Levis connected with Dane Key for 16 yards, then Keaton Upshaw for 22, getting UK to midfield. The first quarter would come to an end with Florida leading 3-0.

Kentucky was forced into another punt early in the second quarter and Florida took over at its own 25. The Gators were forced to punt again and the Cats took over on their own 33.

The Cats would strike on the next possession. Levis hit Keaton Upshaw in the left flat for a 12-yard gain. Then Levis went deep, finding Key, who jumped and, with a defender draped all over him, made a tremendous catch for a touchdown. Matt Ruffolo added the PAT and UK led 7-3 with 11:36 left in the half.

Florida wasted no time in responding. The Gators got a 40-yard rush from Montrell Johnson to get into UK territory. But the UK defense stood tall after that, forcing a 50-yard field goal attempt from Mihalek. The kick was good and the Gators cut the UK lead to 7-6 with 10:01 to play in the half.

Kentucky got one first down on its next possession but two plays later, Levis was hit and Florida’s Gervon Dexter picked the ball out of the air for what was ruled an interception, giving UF the ball at the UK 34.

The Cats went three-and-out on their next possession. And on fourth down, the snap went over the head of UK punter Colin Goodfellow, who chased the ball down and kicked it through the back of the end zone for a safety, giving Florida a 16-7 lead with 4:12 left in the half.

Florida took the next possession with a chance to blow the game open. Instead, on third and three, Richardson tried to go into the flat but UK’s Jordan Wright made a one-handed interception and returned it to the Florida six yard line.

It took four plays, but the Cats would punch it in, with Levis running the quarterback sneak up the middle to cut the Florida lead to 16-13. UK could not convert the PAT after a bad snap prevented the kick from happening.

Kentucky got the first possession of the second half but the Cats couldn’t get anything going and were forced to punt. Florida would follow suit, punting the ball back to the Cats after just three plays.

The Cats took the next possession and methodically marched onto the Florida side of the field. For the first time in the game, UK established the ground game, eventually getting inside the Florida 10 yard line. But Florida held and forced the Cats into a 24-yard field goal, which Ruffolo converted, to tie the game at 16-16 with 6:35 to play in the third quarter.

Florida was poised to answer on its next drive before the Cats defense made yet another huge play. With the Gators at the UK 39, Richardson threw a pass to the right that UK’s Keidron Smith intercepted. Smith had only Richardson between himself and the end zone, and the Ole Miss transfer negotiated that obstacle on his way to the end zone, giving Kentucky a 22-16 lead. Ruffolo added the PAT and UK led 23-16 with 3:25 remaining in the third quarter.

The Gators would make a first down on their next drive, but eventually would be forced to punt, giving UK the ball on its own 15 yard line with 1:27 left in the third. Kentucky would hold that 23-16 lead as the third quarter ended.

The fourth quarter opened with Levis hitting Chauncey Magwood for a 22-yard gain on third down. UK would get into Florida territory again, but the drive eventually stalled and the Cats were forced to punt, giving the Gators the ball on their own 20 with 11:05 remaining.

Florida would make a first down on its next possession before the UK defense stood tall once again. Then, on fourth and three from their own 40, Florida went for it, but Richardson’s pass was knocked away by UK’s Carrington Valentine, giving the Cats the ball in good field position.

Kavosiey Smoke would rush for 18 yards on first down, getting the Cats to the 22. But the drive stalled and Ruffolo came on for a 38-yard field goal attempt. The kick missed to the left and Florida got the ball back with 6:13 to play.

Florida did nothing with the ensuing possession, which was highlighted by a tackle for loss by Kentucky true freshman Deone Walker. Again, Florida went for it on fourth down and again, the Gators failed. UK took over at the Florida 24, looking to put the game away.

Kentucky was content to run the clock with a seven-point lead and less than four minutes to play. Smoke would rush for seven yards, getting the Cats into the red zone. On the next play, Smoke, with the push of his offensive line, gained 11, getting the ball to the Florida five yard line.

Florida could do nothing with its final possession and the Cats claimed the victory.

Kentucky returns to action on Saturday, hosting Youngstown State at Kroger Field. Kickoff is set for noon ET and the game can be seen on the SEC Network.