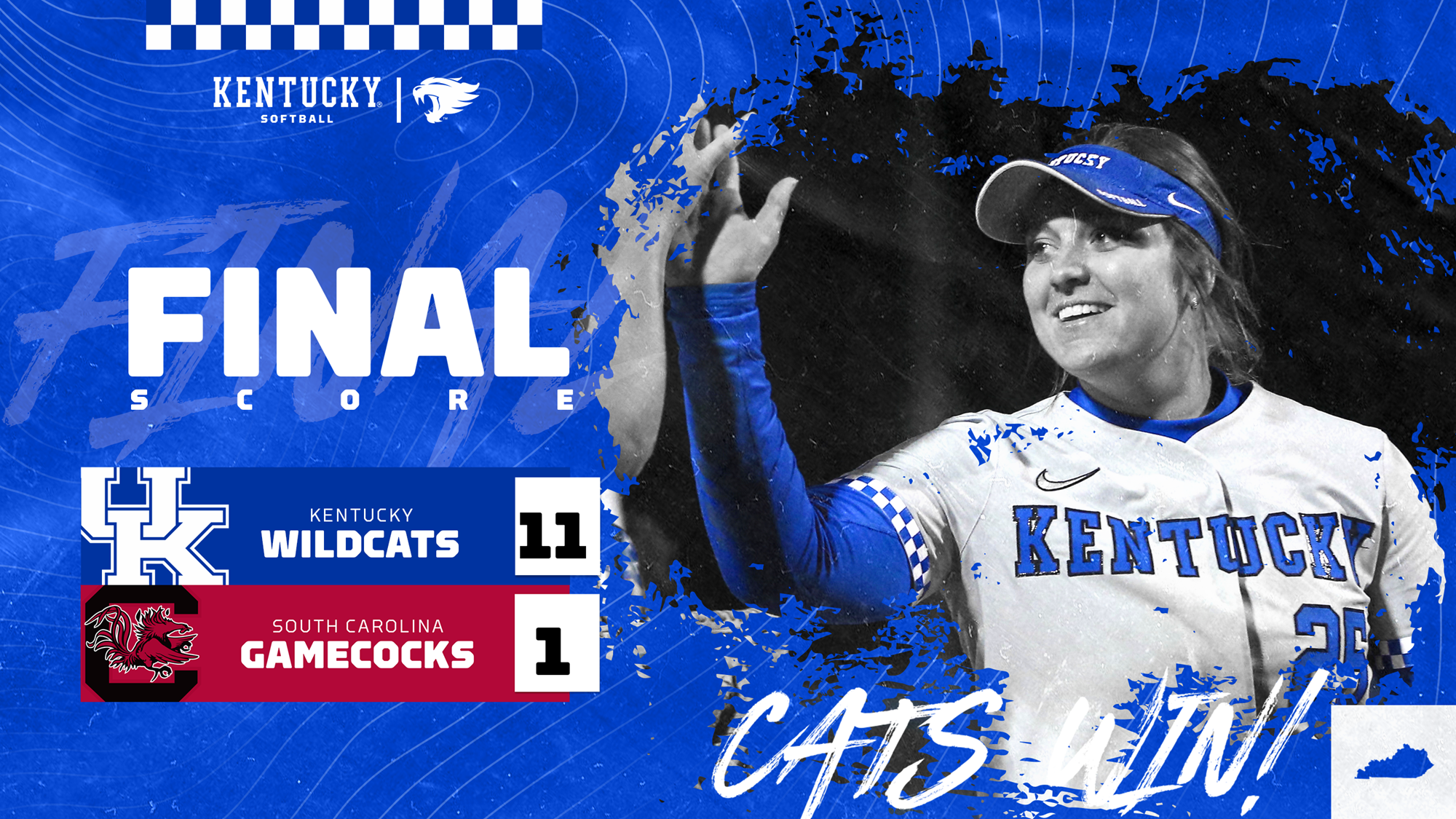 Spangler and Blane Sparkle in 11-1 Win over Gamecocks

COLUMBIA, S.C. – Tatum Spangler went the distance in the circle with three strikeouts, only allowing one run on four hits as the No. 13 Kentucky Softball team beat South Carolina 11-1 to even the series with the Gamecocks.

South Carolina came away with a 6-4 win in game one. The game was resumed in the fifth inning on Saturday afternoon as the Wildcats cut into the lead and brought the tying run to the plate, but were unable to bring her around.

Game two began at 2 p.m. ET and Kentucky came out on fire, taking a 6-0 lead just four innings into the game. Spangler pitched 7.0 innings, the complete game, with three strikeouts and only surrendering four hits. Spangler is now 9-1 on the season and has an ERA of 1.38.

With the split, Kentucky is now 34-16 overall on the year and sits 12-11 in Southeastern Conference play. South Carolina is 26-28 after Saturday’s pair of results and is 3-20 in SEC play. The series finale will be Sunday afternoon at Noon ET on SEC Network, ESPN+ and the ESPN app with Mark Neely and former Oklahoma player Erin Miller on the call.

Game 1 – South Carolina 6, Kentucky 4
Key Play
The key play in the game was Hannah Kumiyama’s two-run single before the rain suspension to make it 5-2, South Carolina in the fourth inning.

Key Player
The key player in the game was Kayla Kowalik who went 2-for-4 with a double and two runs scored.

Key Stat
The key stat was 5. Kentucky allowed five runs on four hits in the fourth inning, which was all but one scored by the Gamecocks in the game.

Run Recap
Kentucky scored twice in the top of the first, on a wild pitch and a sac fly by Miranda Stoddard. UK 2, USC 0

Four RBI singles in five at bats gave the Gamecocks the lead in the fourth. USC 5, UK 2

Lauren Johnson hit a two-run homer in the top of the seventh. Erin Coffel was then walked before three-straight outs ended the game. FINAL – South Carolina 6, Kentucky 4

Game 2 – Kentucky 11, South Carolina 1
Key Play
Renee Abernathy’s grand slam in the top of the third inning on a full count with one out was the key play in the game, putting UK up, 5-0.

Key Player
Tatum Spangler was the key player, going 7.0 innings in the circle, and hitting a three-run HR, her first homer of the season.

Key Stat
11. Kentucky scored 11 runs in the game, its most in an SEC game since an 11-3 win over Auburn back in March.

Run Recap
Miranda Stoddard hit an RBI single to score Meeko Harrison in the top of the first. UK 1, USC 0

In the top of the third, Renee Abernathy hit a grand slam for her 13th homer of the season. UK 5, USC 0

In the top of the fourth, Erin Coffel was walked for the fifth time of the weekend to score a run, as her walk forced in Emmy Blane. UK 6, USC 1

The Gamecocks loaded the bases with no outs in the bottom of the fourth, but only got one run out of the inning. UK 6, USC 1

Emmy Blane hit a homer over the left-center wall in the sixth inning to score a pair for the Wildcats. UK 8, USC 1

Tatum Spangler put her exclamation mark on the game with a three-run bomb to right. FINAL – Kentucky 11, South Carolina 1