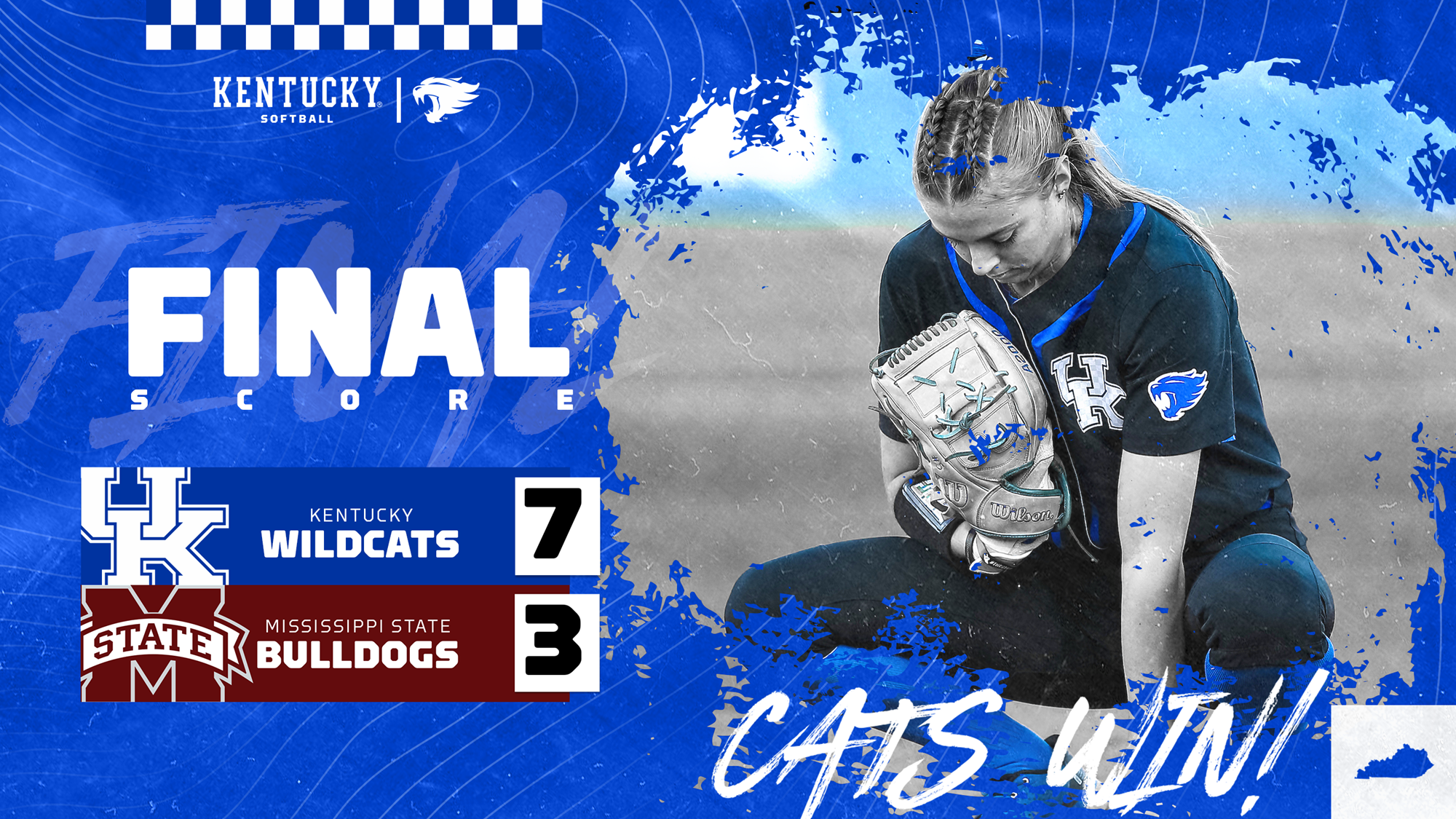 LEXINGTON, Ky. – The No. 11 Kentucky Softball team got offensive sparks from Erin Coffel and Renee Abernathy as senior pitcher Tatum Spangler threw a complete game with two strikeouts as the Wildcats came from behind to beat Mississippi State 7-3 on opening night of the series at John Cropp Stadium.

Spangler threw her third complete game in her last three outings Friday night, going 7.0 innings with zero earned runs on only three hits and notching a pair of strikeouts. Spangler is now 8-1 on the year with a sparkling 1.40 ERA at this point in the season.

Offensively, Renee Abernathy gave Kentucky its first lead of the game with a two-run home run in the third inning as she hammered a pitch off the netting of the videoboard in LF to make it a 4-3 UK lead after falling behind 3-0 early.

Erin Coffel went 2-for-3 with a double and her first triple of the season on the night, scoring two runs and also drawing a walk, as well. Coffel is now batting .423 on the season to lead the Wildcats. The lid on the offense was lifted by Lauren Johnson, who hit four balls hard Friday night, going 2-for-4 with a single, double and a run scored.

Game two of the series will be Saturday at 3 p.m. ET on the SEC Network, ESPN+ and the ESPN app with Eric Frede and Madison Shipman on the call. Saturday will also be Senior Day, with ceremonies celebrating the Class of 2022 scheduled to begin at 2:40 p.m. ET on the field.

Key Play
Renee Abernathy’s two-run home run in the bottom of the third inning was the key play in the game as it gave Kentucky the 4-3 lead after UK had fallen behind 3-0 to start the game.

Key Stat
3. Kentucky had three players with two hits in the game, as Erin Coffel, Lauren Johnson and Renee Abernathy all had a pair of hits in the contest.

Key Player
Emmy Blane was the key player in the game, going 1-for-2 in the game with an RBI double in the fifth inning to help put the game out of reach for the Bulldogs. Blane’s double scored Miranda Stoddard from second base.

Run Recap
Mississippi State scored three runs in the top of the first inning thanks to a Kentucky error that extended the inning. MSU 3, UK 0

After a Bulldog error scored a Kentucky run and Rylea Smith drove in a run on a sac fly to center, Renee Abernathy hit a two-run bomb to left to put the Wildcats ahead. UK 4, MSU 3

In the fifth inning, Erin Coffel tripled and Miranda Stoddard reached on a fielder’s choice to score Coffel on a play at the plate. Abernathy singled to the right side and Emmy Blane launched a double into the left-center gap to score Stoddard. Abernathy then scored on a wild pitch. FINAL – Kentucky 7, Mississippi State 3