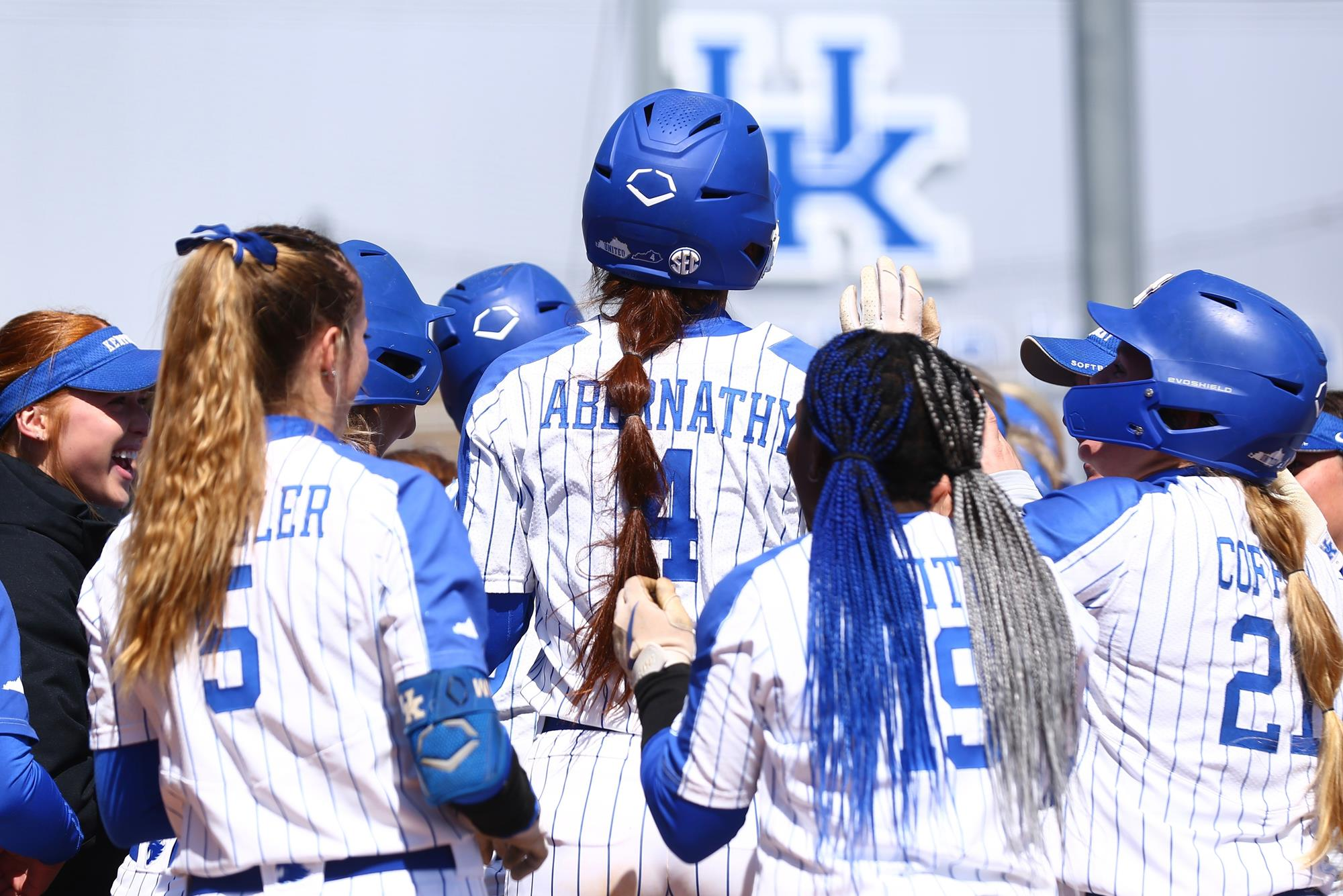 LEXINGTON, Ky. – Renee Abernathy hit her fourth home run in as many games Sunday afternoon, as she rescued No. 8 Kentucky with a walk-off three-run homer to right center in the bottom of the seventh inning as UK defeated No. 18 Auburn 5-4 at John Cropp Stadium to win the series two games to one.

Kentucky trailed 4-1 heading into the bottom of the seventh inning and got four runs on three hits with an Auburn error to score four times and walk off the Tigers for the second time of the weekend. Abernathy has now hit home runs in the last four games, including off of No. 1 Oklahoma and No. 18 Auburn three times.

Going into the seventh inning, Kentucky had scored just once on four hits and left seven runners on the basepaths, including six of those seven in scoring position. Erin Coffel had supplied the only offense for UK all game, as she had a home run off the foul pole along the left-field line in the bottom of the fourth inning.

Kentucky with the win improves to 22-7 on the season and sits 3-3 in Southeastern Conference play. Auburn with the loss falls to 27-4 and is now 6-3 in SEC play. The Wildcats will play host to (RV) Ohio State on Tuesday night at 6 p.m. ET from John Cropp Stadium. Tickets are available at UKathletics.com/tickets.

On the series, Abernathy hit .500 for the weekend with three home runs and she drove in 11 of Kentucky’s 19 runs on the weekend. The only player to hit for a higher average this weekend was Erin Coffel, who mashed at .545 with five runs scored and an RBI.

Key Play
The key play of the game was no-doubt Renee Abernathy’s walk-off home run in the bottom of the seventh inning. Abernathy stepped into the box with Kayla Kowalik on third and Erin Coffel on first and one out trailing by two runs. Abernathy then obliterated a 1-1 offering from Auburn pitcher Maddie Penta over the berm in right center to give Kentucky the 5-4 win to claim the series.

Key Player
Erin Coffel went 3-for-4 on the day and scored two runs in the contest to earn Sunday’s key player of the game honors. The sophomore slugger from Bremen, Indiana put UK on the board in the fourth with her eighth home run of the season to LF and had singles in the fifth and seventh innings. Coffel hit .545 on the weekend to lead all UK hitters in average.

Key Stat
5. The key stat in the game was that Auburn committed five errors. Their error in the seventh led to Kayla Kowalik getting on base to score Lauren Johnson and put Kowalik on first.

Run Recap
Auburn used solo home runs in the second inning and two in the fourth to take a three-run lead. AU 3, UK 0

In the bottom of the fourth, Kentucky’s Erin Coffel hit a home run off the foul pole in LF to give Kentucky its first runs of the day. AU 3, UK 1

In the top of the sixth, an RBI single scored the fourth Auburn run of the afternoon. AU 4, UK 1

Kentucky’s Lauren Johnson led off the seventh with a double to left center and scored on an Auburn error during Kayla Kowalik’s at bat. Auburn then made a pitching change from Shelby Lowe to Maddie Penta to face Erin Coffel, who belted a single into left to put runners on the corners with one out. Renee Abernathy then stepped to the plate and hammered her fourth home run of the week to right center over the berm and Kentucky walked off Auburn, 5-4. FINAL – Kentucky 5, Auburn 4