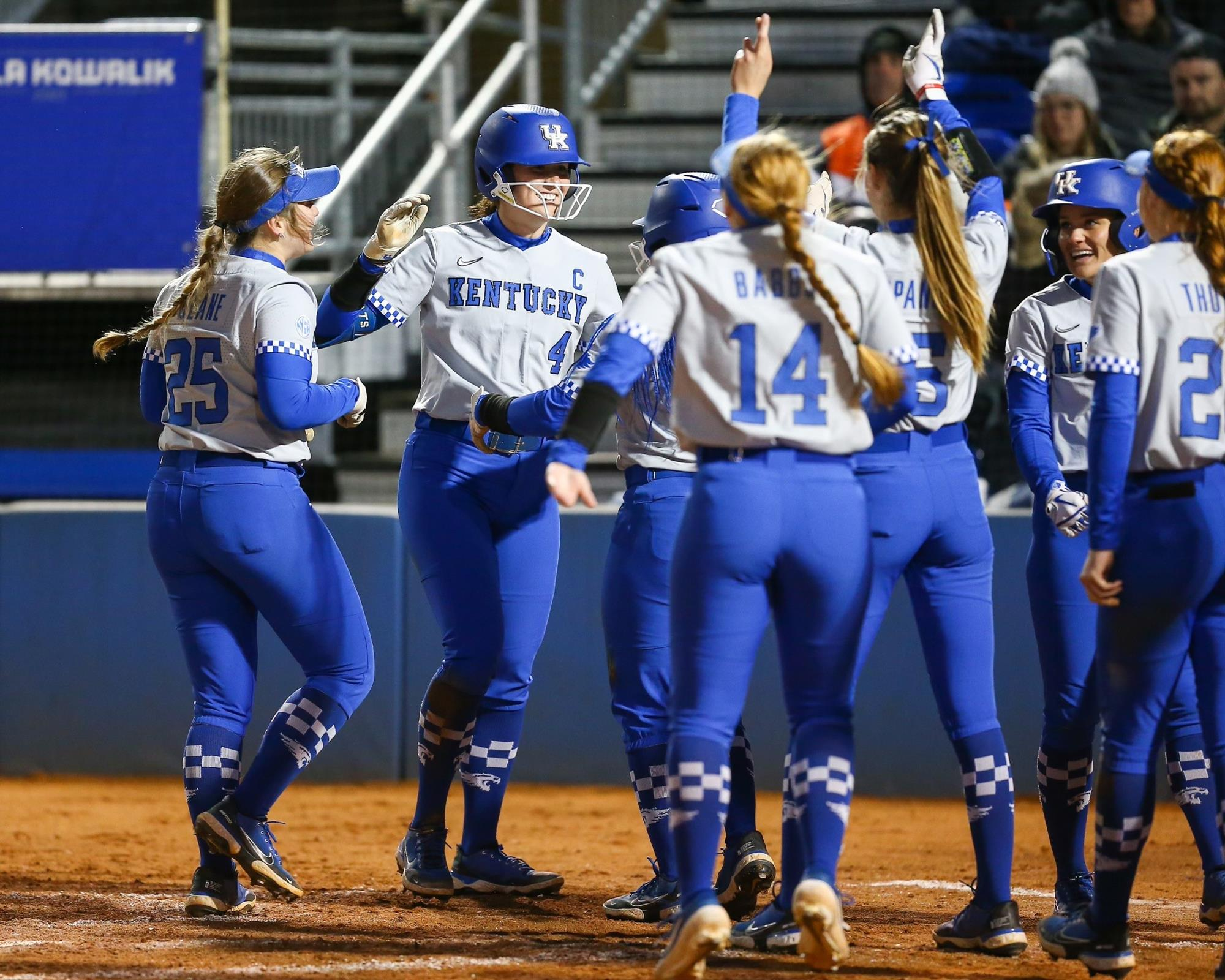 LEXINGTON, Ky. – Renee Abernathy tied the school record with six RBI in a game Friday night as she had a walk-off grand slam to help lift the No. 8 Kentucky Softball team to an 11-3 run-rule win over the No. 18 Auburn Tigers in six innings.

Kentucky with the win improves to 21-6 on the season and is .500 in league play for the first time this season at 2-2. Auburn suffers just its third loss of the season and is now 26-3. The Tigers are 5-2 in SEC play.

Game two of the series will be Saturday at 1 p.m. ET from John Cropp Stadium live on the SEC Network. Mike Couzens and former Alabama All-American Kayla Braud will have the call from Lexington. Tickets are available at UKathletics.com/tickets.

Key Play
The key play in the game was Meeko Harrison’s two-RBI double in the bottom of the third inning, which gave UK the 5-3 lead after Auburn rallied to tie the game at 3-3 in the top half of the inning. Harrison went 2-for-3 in the game in her first-career start for the Wildcats with a single, double and a pair of RBI.

Key Player
Rylea Smith went 4-for-4 in the game with a double and three singles in addition to an RBI and scoring a pair of runs. Smith was also clean in the outfield as she set a new career high for hits in a game at the plate with her four-hit night.

Key Stat
Renee Abernathy tying the school record with six RBI in the game was the key stat. Abernathy had her six RBI on two different hits, including a walk-off grand slam.

Run Recap
Kentucky scored in the bottom of the first on a two-run two-out double off the bat of Renee Abernathy to score Rylea Smith and Lauren Johnson who walked. UK 2, AU 0

Auburn’s Lindsey Garcia hit a solo HR in the top of the second inning. UK 2, AU 1

Kentucky answered back in the bottom of the second in an RBI single from Rylea Smith that brought home Meeko Harrison after a lead-off single from the Californian. UK 3, AU 1

In the top of the third, Auburn scored twice on a Nelia Peralta’s double. UK 3, AU 3

Meeko Harrison hit a one-out, two-RBI double to right to score Erin Coffel and Renee Abernathy in the bottom of the third as Kentucky went back in front. UK 5, AU 3

In the bottom of the fourth, Kentucky played Kayla Kowalik after a one-out single on a sacrifice fly off the bat of Lauren Johnson for her 21st RBI of the year. UK 6, AU 3

Jaci Babbs led off the bottom of the sixth with a single and scored on a wild pitch. The bases were then loaded thanks to a single by Smith, Johnson reaching on a fielder’s choice and walk to Erin Coffel. Abernathy ended the game on a first-pitch grand slam to right center to close the game. FINAL – #8 Kentucky 11, #18 Auburn 3 (F/6)