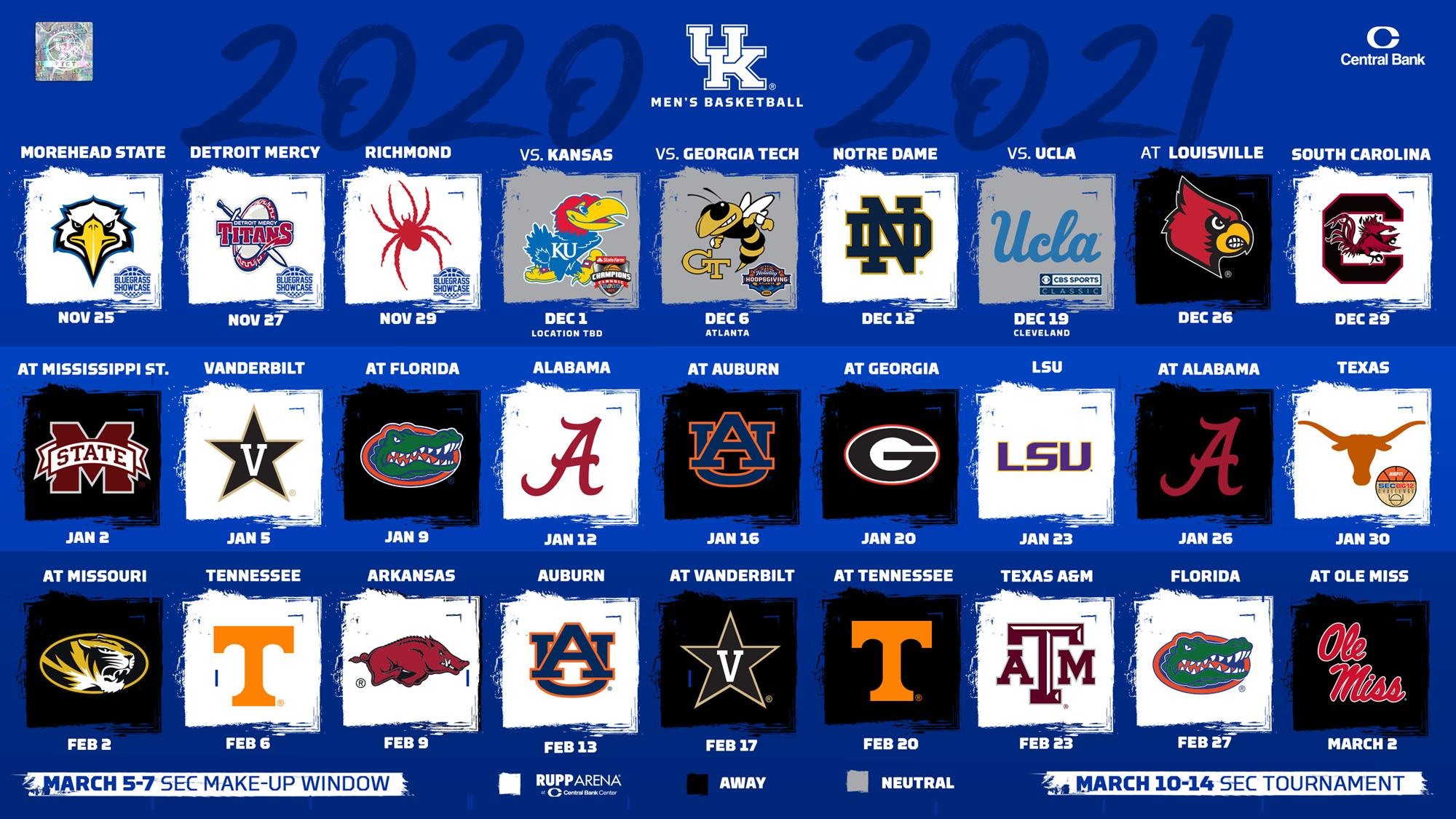 LEXINGTON, Ky. – Adjusting to the new start date for the 2020-21 season, as approved by the NCAA Division I Council, the Kentucky men’s basketball team has revised and released an updated and completed schedule for the upcoming season.

The Wildcats will play nine nonconference opponents to go along with 18 Southeastern Conference matchups. Beginning Nov. 25 with a home game vs. Morehead State in the Bluegrass Showcase at Rupp Arena, UK will play eight of its nine nonconference games before league play begins Dec. 29 vs. South Carolina. The SEC/Big 12 Challenge, which will bring Texas to Rupp Arena, will be played in the middle of league play on Jan. 30. The SEC Tournament is set to be held March 10-14 in Nashville, Tennessee.

Adhering to the NCAA Division I Council’s framework for scheduling, UK will play in 24 regular-season games with one three-game multi-team event, resulting in 27 total games before postseason play.

“With all that we’ve been through the last eight months, we are beyond grateful to return to competition and begin the 2020-21 season,” UK head coach John Calipari said. “We don’t know exactly how this is all going to play out with the virus, but the health and safety of our players and our staff is going to be at the forefront of everything we do.

“I want to commend our staff for being on top of the schedule. When it became clear to us that we were going to have to make adjustments, our staff was all over it. I am really pleased that we not only preserved most of our previous agreements but also kept the type of opponents on our schedule that are going to challenge our guys and help them grow.”

“This schedule will serve as a great test for our young team,” Calipari said. “We will have to learn to fail fast. Things will be a bit different in how we do things to stay safe, but we are going to make this as normal of an experience for our players and our fans as we can, and I’m confident what we’ve put together will prepare us to make a run at the end of the season. Like everyone else, I can’t wait to return to competition.”

The full schedule is below:


Tip times and television designations will be announced later.

No exhibition games or closed scrimmages will be allowed before Nov. 25, per the NCAA Division I Council, but UK announced Thursday it will host its annual Pro Day on Nov. 12 and Big Blue Madness on Nov. 20. Both will be done virtually in Memorial Coliseum with no fans and both will be televised by SEC Network.
The league has built-in make-up dates scheduled for March 5-7 in case games are postponed due to COVID-19 safety protocols.

Earlier Friday, UK Athletics announced a reduced capacity/distanced seating plan to host fans at Rupp Arena in the healthiest manner possible for the 2020-21 season based on the recommendations from state health officials. Anticipated attendance for the season will be up to 15% of normal arena capacity. All plans are subject to change based on evolving information as well as local, state and national public health developments.

The UK Ticket Office and K Fund will communicate directly with season ticket holders in the coming days to provide additional information regarding 2020-21 season tickets and to begin the ticketing process. Tickets will be sold in season packages and K Fund priority rankings will determine the order for ticket assignment. Ticket holders are encouraged to regularly monitor their email for additional updates leading up to the home opener.

Available tickets will be physically distanced throughout Rupp Arena and will be primarily sold in small blocks of two, three and four seats to maximize attendance opportunities for a greater number of season ticket accounts. All seating will be reserved, and ticket holders will be required to sit in their assigned seats. UK Athletics hopes to accommodate as many ticket accounts as possible, though there is no guarantee that every season ticket holder will be able to purchase tickets due to the limited capacity.

More information on UK’s ticket and game-day operations changes for the 2020-21 season can be found here.

Kentucky will begin the season in Rupp Arena with the Bluegrass Showcase, a multi-team event featuring Morehead State, Detroit Mercy and Richmond. The event will include two games a day on Nov. 25, Nov. 27 and Nov. 29. Each team will face each other once.

The Wildcats will then spend most of December on the road, beginning Dec. 1 with the rescheduled and relocated Champions Classic. A location is to be announced. UK owns a 5-4 record in the event after defeating Michigan State a season ago. The Wildcats are 2-1 vs. the Jayhawks in Champions Classic matchups.

Kentucky will travel to Atlanta to complete a two-game series with Georgia Tech on Dec. 6. After defeating the Yellow Jackets 67-53 last season in Rupp Arena, Kentucky will play Georgia Tech at State Farm Arena in Atlanta as a part of the Holiday Hoopsgiving. UK is 57-15 all-time vs. its former SEC foe.

The three-year series vs. Notre Dame remains intact and Notre Dame will honor its previously announced trip to Rupp Arena on Dec. 12. The series will also include a neutral-site event in 2021 and a road game in South Bend, Indiana, in 2022. The Wildcats and Fighting Irish have played in an on-again, off-again series for more than 80 years. UK leads the series by a 43-19 margin and won the last matchup between the two schools in an epic showdown in the NCAA Tournament for the right to move on to the Final Four in 2015.

UK’s first true road game of the season will take place Dec. 26 at the KFC Yum! Center in Louisville. The Wildcats have the upper hand in the series with a 37-16 record, including 13-9 in Louisville. Kentucky has been particularly dominant of its rival in the Calipari era with an 11-2 record in 11 seasons, including 2-0 vs. current UofL head coach Chris Mack and a three-game winning streak overall.

The nonconference schedule will give way to the typically difficult SEC slate. The league has earned 15 berths in the last two NCAA Tournaments, the conference’s best two-year stretch. The SEC was slated for another impressive haul last season until the COVID-19 pandemic canceled the postseason.

The Wildcats went 15-3 last season in league play to win their sixth regular-season SEC crown under Calipari and the 49th in school history, nearly as many as the entire league combined (53).

As announced prior to the 2015-16 season, Kentucky’s permanent home-and-away opponents in the league include Florida, Tennessee and Vanderbilt. This upcoming season, the Wildcats will also play Alabama and Auburn twice in the regular season.

UK’s 2020-21 opponents combined to go 399-286 last season, a .582 winning percentage. Eight of the Wildcats’ 22 total competitors ranked in the top 50 of the NCAA Evaluation Tool. A full schedule breakdown is available below.

The Wildcats said farewell to eight of their top nine scorers from a season ago, including all five starters. The lone major returning contributor from last season will be sophomore forward Keion Brooks Jr., who averaged 4.5 points and 3.2 rebounds per game in 31 appearances, including six starts.

Calipari and his staff have prepared for the losses – which included five underclassmen declaring for the NBA Draft – with the nation’s consensus No. 1 recruiting class and three key transfers. 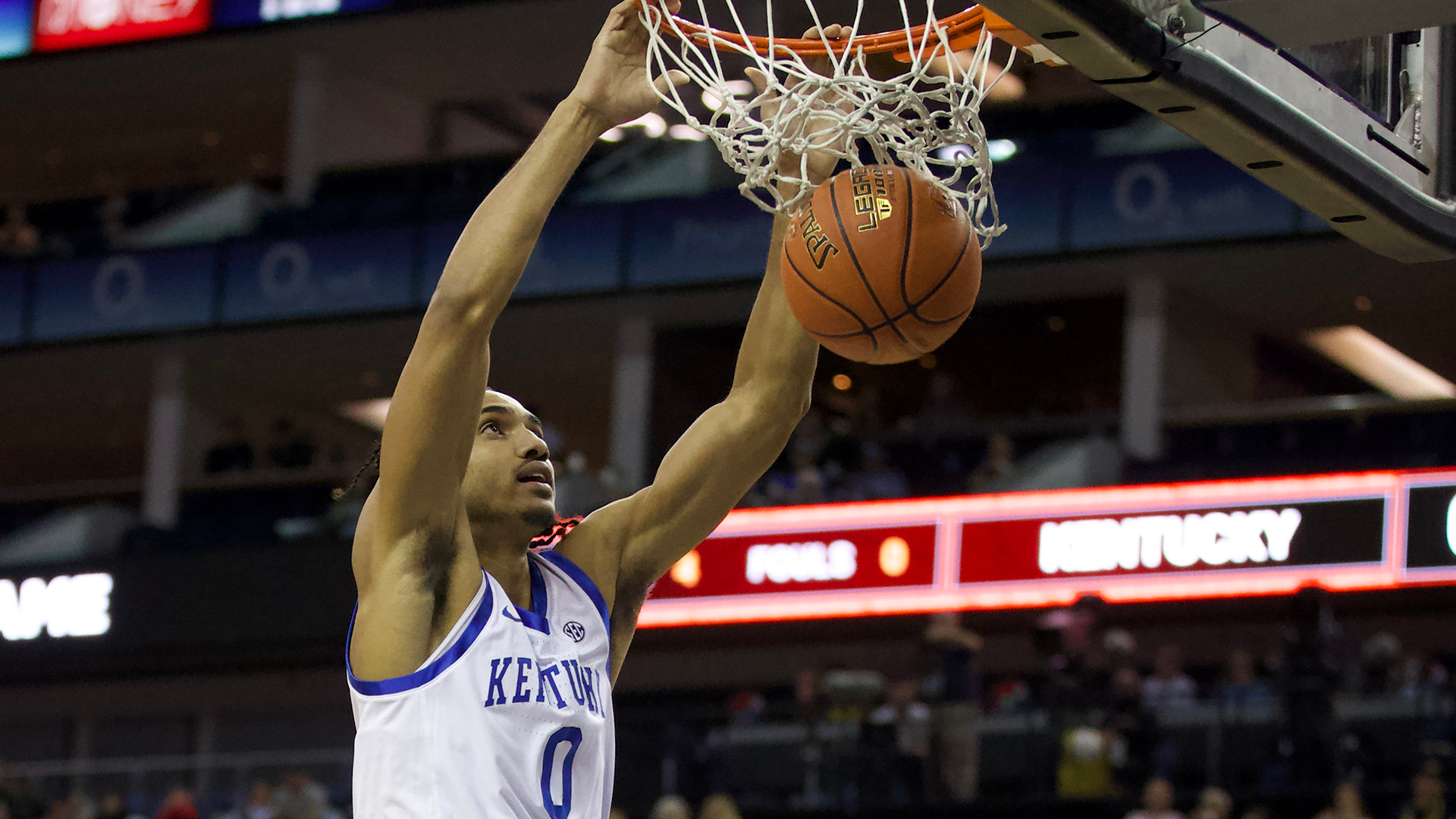 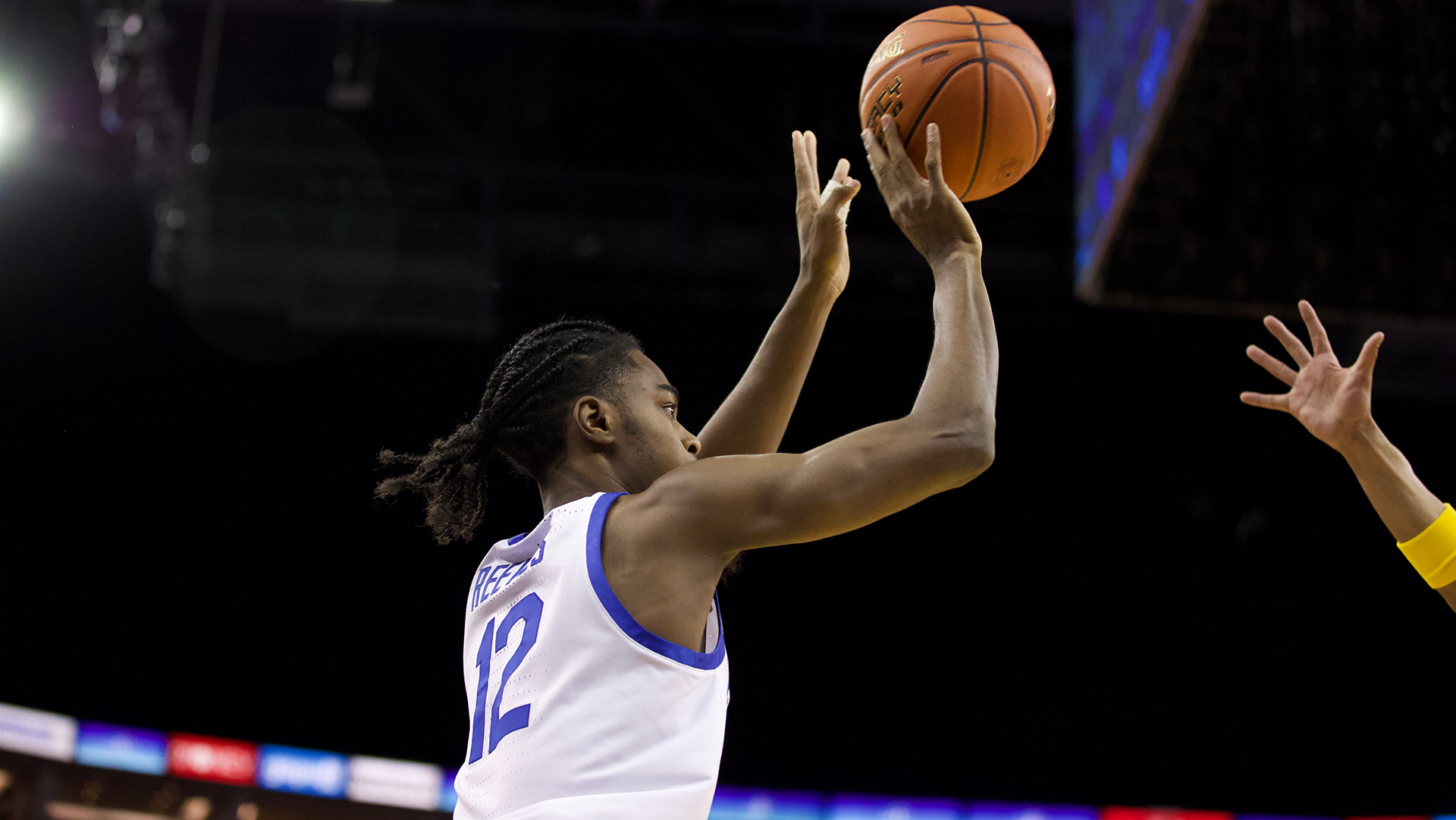 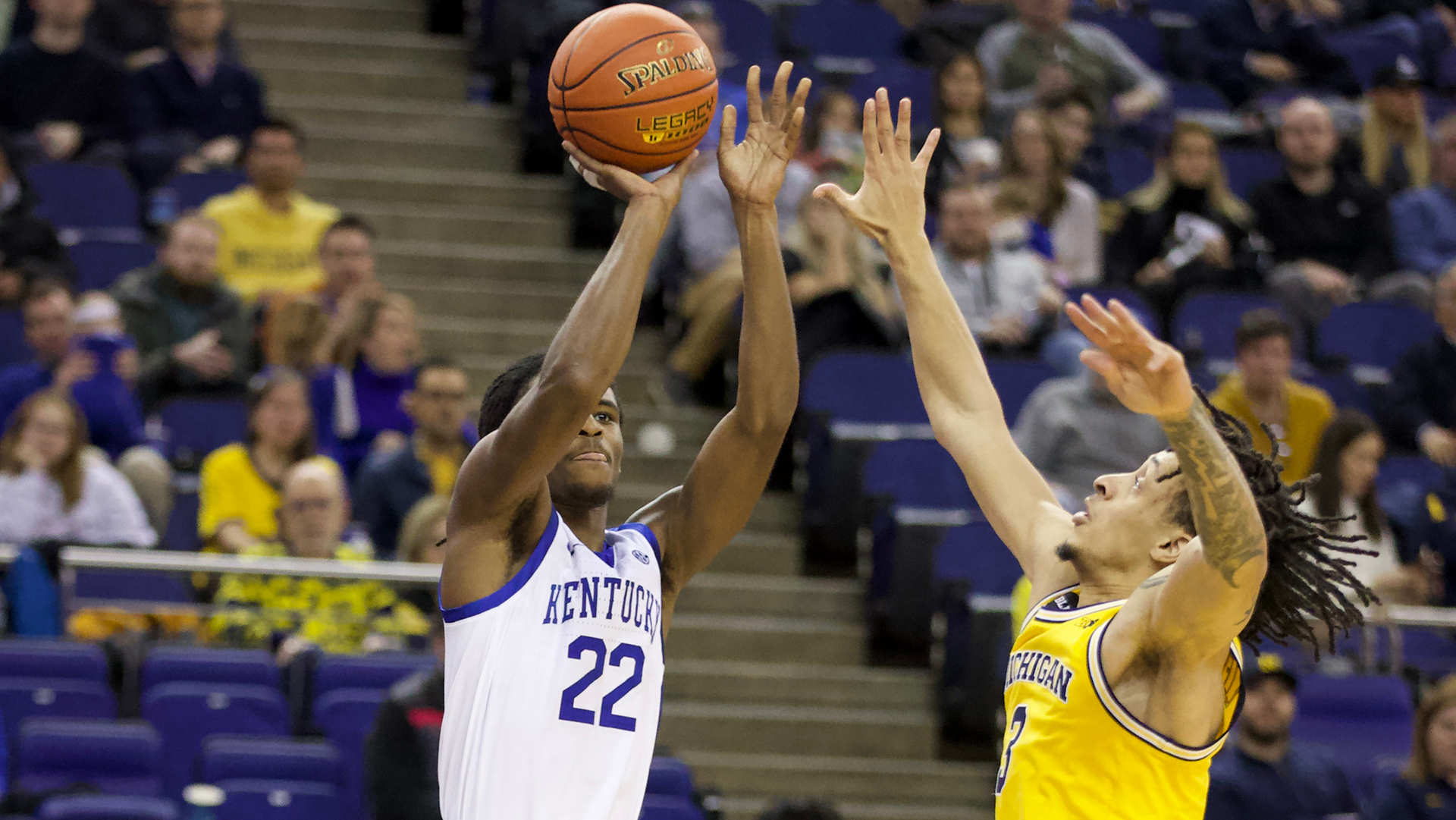