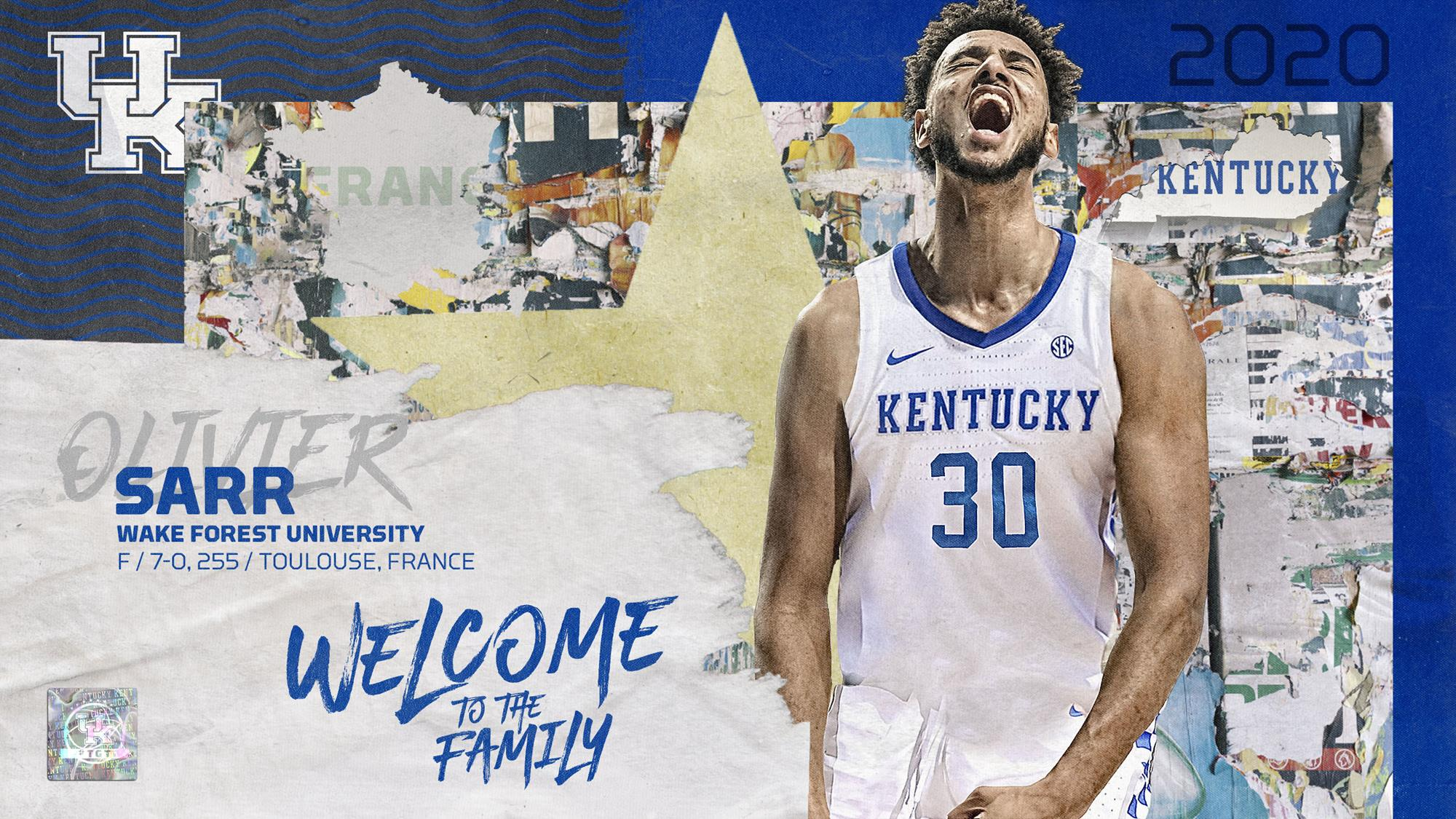 LEXINGTON, Ky. – The Kentucky men’s basketball team made a big – literally and figuratively – addition to its roster with the official signing of 7-foot transfer Olivier Sarr out of Wake Forest.

Sarr, a centerpiece of the Demon Deacons over the last three seasons, officially signed with the Wildcats on Wednesday afternoon after verbally announcing his decision earlier Wednesday.

Under current NCAA transfer rules, Sarr will have one season of eligibility remaining with the Wildcats starting in the 2021-22 season. Sarr said publicly last week that he plans to apply for a waiver for immediate eligibility after a recent coaching change at Wake Forest.

“First of all, I want to thank everyone at Wake Forest – everyone from the fans, to my teammates, to all the coaches, the staff, the administration, my teachers, our academic support team, the RAs, managers and so many others – for all they’ve done for me the last three years,” Sarr said. “All of you worked with me to make me a better person, a better basketball player and a better man. I am indebted to all of you for the experience I’ve had the last three seasons. Thank you from the bottom of my heart.

“To the fans at Wake Forest, thank you for adopting me and making me one of your own. I’ll never forget my time in Winston-Salem and the memories our team made playing for you. Once a Demon Deacon, always a Demon Deacon.

“With everything that has happened in the last 2-3 weeks, I’ve had a lot to think about and consider. If I’m being honest, it’s been an emotional struggle for me. Coach (Danny) Manning and the staff were family. After thinking deeply about it, talking with my support system and weighing my future, I just didn’t feel like I could be at my best by returning to Wake Forest.

“With that said, I have decided to finish my career at the University of Kentucky and take on this challenge. I want to thank everyone for their kindness and respect in coming to this decision. I will always be a fan of Wake Forest. BBN, I can’t wait to get started.”

“I am excited to coach Olivier,” UK head coach John Calipari said. “Olivier is a great kid and a terrific player on the rise who knows he’s going to have to come in and lead. He gives us a veteran, established player who has not only played on a big stage and played well, he wants this next challenge.

“When we first talked to Olivier, my first thought wasn’t on what he does for this team, it was why he wanted to be here. I coached Danny and know his relationship with his players, so when Danny talked about what a great kid he is, we said, ‘Let’s do this.’

“Oliver was one of the best players in the ACC last season and got better and better – as he’s done his whole career – as the year went on. By the end of the season, he was one of the top five players in the league. I’m ecstatic he wanted to be a part of this program and what we have going forward.”

Sarr is widely regarded as one of the nation’s top transfers. A native of Toulouse, France, he totaled 664 points, 496 rebounds and 81 blocks with 31 starts in three seasons at Wake Forest. He considered entering the NBA Draft before the coaching change in Winston-Salem, North Carolina. He should provide Kentucky with an elite rim protector with considerable size and good athleticism.

Sarr blossomed in his third season with the Demon Deacons. He led the team with 11 double-doubles and 33 blocks, scored in double figures in 23 games and was a two-time ACC Player of the Week. Sarr was particularly good late in conference play, finishing on a six-game double-figure scoring run with three double-doubles.

Included in that season-ending tear was a 20-point, 13-rebound game vs. Pitt in the 2019-20 finale, a career-high 30 points and 17 rebounds in a win vs. Notre Dame, and 25 points in a double-overtime victory over Duke. Sarr also enjoyed three straight double-doubles in January vs. Virginia, Clemson and Boston College and recorded 21 points and 13 rebounds vs. nationally ranked Arizona.

Sarr showed promise as a sophomore, averaging 6.2 points and 5.5 rebounds in 25 games, including 16 starts. He led the team with 25 blocks and scored in double figures in four games.

Prior to his career at Wake Forest, Sarr played for the French National Team at the U-17 and U-18 levels.

Although not officially a part of the 2020 signing class, Sarr will join a group of newcomers that is widely regarded as the top class in the country. UK’s current seven-man freshman class features six consensus five- and four-star prospects, including top-10 signees Brandon Boston Jr. and Terrence Clarke.

In addition to its top-ranked signing class, UK has also already added Creighton graduate transfer Davion Mintz, who signed with the Wildcats last month  and is immediately eligible, and Rhode Island transfer Jacob Toppin, who has three seasons of eligibility left and is not expected to be available until the 2021-22 season under current NCAA transfer rules.

Forward Keion Brooks Jr. has already announced he will return for his sophomore season, but Kentucky will have to replace seven of its top eight scorers from a season ago with five underclassmen declaring for the NBA Draft last month, Nate Sestina’s eligibility expiration and the transfer of Johnny Juzang.

The 2020-21 Wildcats will be tasked with replacing 94% of their scoring and 84.4% of their rebounding from this past season.

Welcome to the family, @olivier_sarr! #LaFamilia