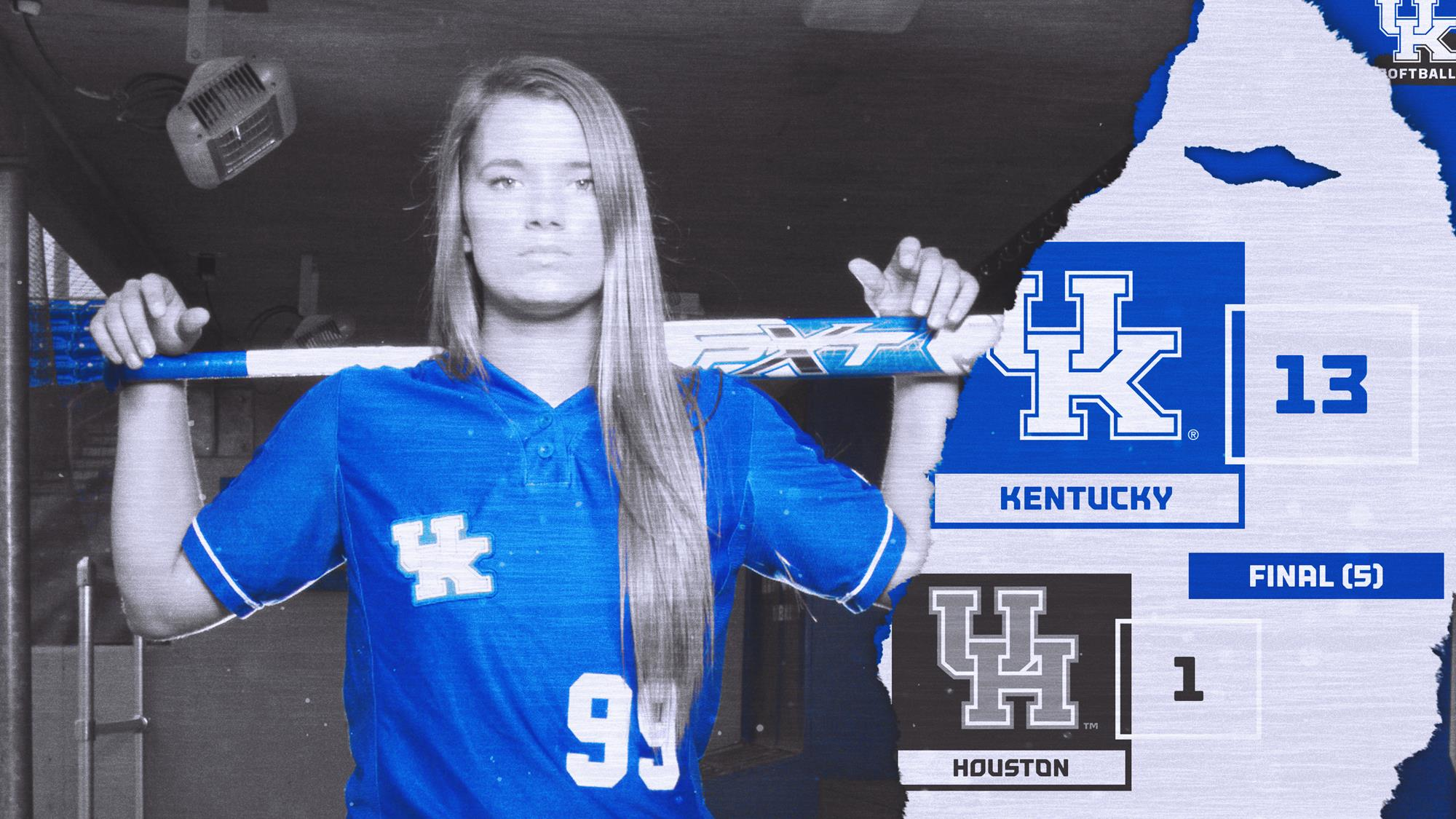 HOUSTON, Texas – The No. 13 Kentucky softball offense awoke on Saturday night, striking for 13 runs on 11 hits in a clobbering of Houston, avenging its loss to the Cougars on Friday.

Senior outfielder Kelsee Henson had four RBI in the game, including a two-run home run in the top of the third inning. It was her second-career home run, and her first since the 2016 season, her freshman year, when she hit a home run on the second day of the season against New Mexico.

The Wildcats scored a run in every inning, including five in the bottom of the fourth inning.

The 13 runs scored is the most scored by the Wildcats in a single game since March 14 in a 15-2 win over Indiana at John Cropp Stadium in 2018.

Kentucky bounced back from its day one performance, winning both games on Saturday to even its season record at 2-2. Houston with the loss falls to 1-2 with one game remaining on Saturday night against Illinois.

The 2019 Cougar Invitational will conclude on Sunday morning for the Wildcats at 10 a.m. ET against No. 22/21 Oklahoma State. The Cowgirls are 3-1 on the year so far, only losing to Illinois in the first game of the tournament.

Key Play
Alex Martens’ two-run home run in the top of the first was the key play in the game, setting the tempo for the Wildcat offense. It was her second home run of the weekend.

Key Player
Kayla Kowalik was the key player in the game for Kentucky, going 2-for-2 at the plate with two doubles, a hit by pitch, an RBI and two runs scored. She was on base all six times she appeared at the plate in both of today’s games. Between the two games UK played today – Kowalik went 5-for-5 with a triple, two doubles, two singles, a hit by pitch, five runs scored and an RBI.

Run Recap
Lauren Johnson reached base in the top of the first and Alex Martens homered to left center to put the Wildcats on top early in the game. UK 2, UH 0

Kayla Kowalik had an RBI double in the top of the second, scoring Autumn Humes who singled earlier in the inning. UK 3, UH 0

Abbey Cheek led off the third inning with a double to right center and came around to score on a Jenny Schaper single. Kelsee Henson then hit a two-run home run, scoring herself and Schaper. UK 5, UH 0

Kowalik led off the top of the fourth inning with a HBP and came around to score on a Cougar throwing error. Mallory Peyton clubbed an RBI single to LF on her first hit of the season. That was followed by a Kelsee Henson two-RBI double. Maclai Branson doubled with two outs to score Kelsee Henson from second, but after an extended umpire conference – it was determined that the ball was foul.  UK 11, UH 0

Kowalik led off the top of the fifth with a double and Abbey Cheek walked, coming around to score on a two-run double by Martens for her third and fourth RBI of the game. FINAL – Kentucky 13, Houston 1