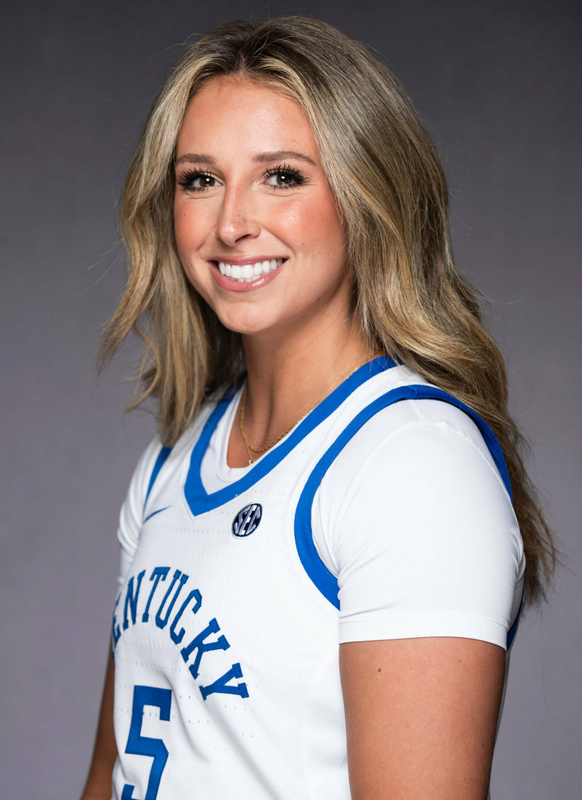 Graduated in May 2022 with an undergraduate degree … Impressive in-state prospect that has a strong motor and high basketball IQ …  Athletic, versatile guard that can score from the perimeter but also create off the dribble … Was named 2018 Naismith High School All-America Honorable Mention after scoring 93 points in three games to lead Harlan County to the KHSAA State Tournament … Picked Kentucky over Louisville, Dayton, Tennessee and UCLA.

2021-22 (Senior)
Sustained a ruptured Achilles in Kentucky’s closed scrimmage vs. EKU this preseason and missed the 2021-22 season.

2020-21 (Junior)
Played in 27 games with 18 starts, averaging 6.0 points per game … Hit 33 percent from long range (21-of-63) … Scored 10 or more points seven times, 15 or more points three times and had one 20-point game … Led UK in points three times, assists twice, steals twice and blocks three times … Hit three or more 3s twice during the season … Started the season opener against Murray State, tying her career-high 13 points on 5-of-10 shooting, including 3-of-5 3FG, adding three assists, a block and a steal … Scored nine points and grabbed four rebounds against Belmont … Led Kentucky with 17 points against Marshall, going 8-of-13 from the field, while she also added two steals … Contributed 10 points against Samford, scoring on 3-of-5 shooting and a pair of 3-pointers, while also dishing out three assists … Put up 10 points on 4-of-8 shooting against No. 10 Arkansas, while also recording a career-high three blocks … Scored eights points on 3-of-6 shooting and 2-of-4 from long range at No. 12 Mississippi State, and added a pair of assists … Led Kentucky in scoring with 22 points against Vanderbilt, going 7-of-10 from the field and 4-of-5 from 3 with five rebounds … For the second straight game, led Kentucky in scoring against Auburn with 18 points on an impressive 7-of-9 shooting and 2-of-3 from the arc … Played just 15 minutes against Florida in the second round of the SEC Tournament, but drained two clutch jumpers down the stretch, adding two rebounds, to help Kentucky pass Florida to go to the SEC Tournament quarterfinals … Huge piece in Kentucky’s NCAA Tournament First Round win over Idaho State, scoring 10 points on 4-of-8 shooting and 2-of-4 from long range in just 22 minutes.

2019-20 (Sophomore)
Strong sophomore season improving her scoring total from her freshman campaign … Averaged 5.8 points and 2.2 rebounds per game adding 30 assists, 17 steals and six blocks … Hit 22 3-pointers during the year … Scored 10 or more points six times during the year while she led UK in rebounding and assists once and in blocks three times … Scored 12 points against Morehead State, adding two rebounds and two steals… Recorded her second straight double-digit game scoring 12 points against Grambling State on 5-of-6 from the field and 2-of-3 from long range, adding three rebounds and three assists… Tied her career-high 13 points against Winthrop, adding four rebounds and two steals… Tied a career high with 13 points against Texas A&M, going 5-of-8 from the field and 3-of-5 from the arc … Led Kentucky in rebounding for the first time in her career against Missouri with seven boards, while adding 11 points hitting two 3s … Went 4-of-5 from the field and 2-of-2 from long range at Ole Miss scoring 10 points … Had seven points and a 3 against Tennessee in the SEC Tournament.

2018-19 (Freshman)
Played in all 33 games for the Wildcats, averaging 5.3 points and 2.0 rebounds per game … Played 17.6 minutes per game hitting .426 from the field and .364 from long range … Scored 10 or more points in four games, including a season best 13 points with three rebounds, one assist and one steal in 22 minutes against Alabama State … That performance in her varsity debut marked the seventh best scoring performance by a UK player in their first varsity game in program history … Had four or more rebounds in five games including a season best six boards against Murray State with nine points … Went 3-of-3 from long range against Middle Tennessee … Rallied nine points at LSU going 4-of-7 from the field with a 3 and two rebounds … Added defensive energy and intensity vs. Florida, earning eight points, five rebounds and led UK with two steals … Scored 12 points at Auburn on a perfect 5-of-5 from the field and 2-of-2 from long range, adding three rebounds.

High School
Shinned as a senior at Harlan County High School helping the Black Bears to the KHSAA State Tournament … Impressive performance in the regional tournament starting with 23 points and five rebounds against Pineville before 38 points, eight rebounds, four assists and two steals vs. South Laurel in the semifinals … In the regional championship against North Laurel, she had 32 points, six assists, five steals and four rebounds, shooting 12-of-19 from the field … Averaged 26.0 points per game and 6.5 rebounds per game as a senior, hitting 59.3 percent from the field and was an impressive 157-of-186 (84.4 percent) from the free-throw line … Strong senior campaign led her to be a McDonald’s All-America nominee and a member of the Naismith Trophy Preseason Watch List … Was a finalist for Kentucky Miss Basketball … Four-star prospect according to ESPN.com and ProspectsNation.com … ESPN.com ranked her as the ninth best wing in the 2018 class and praised her long-range shooting, ability to exploit mismatches, rebound, handle and pass in transition … ProspectsNation.com ranked her as the 46th best player overall in the 2018 class … Incredible junior season averaging 23.1 points per game with 7.2 rebounds per game … Shot 53.8 percent from the floor as a junior, including 43.8 percent (39-for-89) from 3 and 77.2 percent from the free throw line … The strong season paced Harlan County to a 28-3 record and a appearance in the regional championship game … Averaged over 18 points per game with eight rebounds per game for the Black Bears as a sophomore, hitting over 50 percent from the field … Coached in high school by her mother, Debbie Green, who was also a letterwinner one season at Kentucky … Was named a first-team all-state performer by both the Lexington Herald-Leader and Louisville Courier-Journal in 2017 and 2018 … Was second-team all-state by the Louisville Courier-Journal and Lexington Herald Leader in 2016 … Honorable mention all-state as a freshman by multiple outlets … Played for the AAU Kentucky Premier team coached by Jarrad Parmley