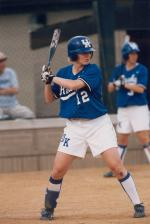 2001 – Started all 61 games as a freshman… Scored 26 runs… Had nine doubles… Drew nine walks… Was second on the team with 125 assists, tied for the fifth highest single-season total in UK history… Had 10 multi-hit games… Had six multiple RBI games… Played all four infield positions, starting at third base 48 times… Hit first career home run against Marshall (2/23/01)… Delivered the game-winning RBI in 9-8 win over Indiana (3/12/01 – game 1).

Personal – Full name is Rachel Renae Friberg… Parents are Nathan and Margaret Friberg… Was born July 2, 1982âÂÂ?¦ Lists winning the 1998 state basketball championship as her most memorable moment in sports… Chose Kentucky because the school had strong academic programs with a very competitive team and great facilities… Chose the Wildcats over Virginia Tech, Nebraska at Omaha, Cornell and Pittsburgh.

Q&A with Friberg
Favorite movie: “Tommy Boy”
Favorite band: Britney Spears
Favorite type of food: Grilled Cheese
I wear #12 because: 4 is taken
My favorite sport other than softball is: Basketball
If I could see only one professional sports team play, it would be: Minnesota Wild
If a movie was to be made about me, I would like this person to portray me: Cameron Diaz
The person I admire most is: My sister