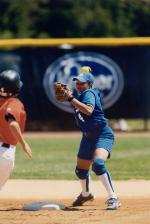 2002 – First team All-SEC infielder…Named to the national Fastpitch Coaches Association All-South Region First Team, becoming the first UK player ever named to the first team…school record-holder with .358 career batting average…197 career hits rank third all-time, as do her 107 runs scored…fourth in school history with seven triples…appeared in 48 games, starting 47…led team with .442 batting average…had school-record 14-game hitting streak(2/22-3/16)…hit safely in 41 of 48 games played…had a team-leading 20 multi-hit games…led team in runs (34), hits (68), slugging percentage (.506), sacrifices (9) and on base percentage (.466)…her .442 average set a single-season school record, smashing the previous record of .398, and ranks fifth all-time in SEC history…ranked second on the team with 154 at-bats…her 78 total bases were third on the team…had four doubles…drove in 16 runs…stole eight bases in nine attempts…had three hits in a game seven different times…had four consecutive multi-hit games(3/26-3/30)…was 13-for-22 with seven RBI during the Sonic Challenge…went 3-for-3 with two runs scored and one RBI against Arkansas(5/3/02)…was 6-for-7 with three runs scored in double-header split with Louisville(4/10/02)…went 3-for-4 with three RBI and three runs scored against Belmont (2/23/02)…went 3-for-3 on five different occasions.

Q&A with Jones
Favorite movie: “Coming to America”
Favorite type of food: Lasagna
I wear #4 because: It was the number of a girl I looked up to in high school who was very good at basketball
My favorite sport other than softball is: Basketball
If a movie was to be made about me, I would like this person to portray me: Halle Berry
The person I admire most is: Anyone who has overcome adversity
My favorite holiday is: Thanksgiving