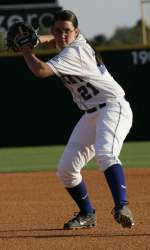 Freshman (2009): Was an All-SEC Freshman Academic team performer … Made her first collegiate appearance at the plate in the loss to DePaul … Had a plate appearance against Lafayette and UConn at the Fifth Annual Mardi Gras Invite … Notched her first career hit in the first victory over Stetson … Redshirted the remainder of the season after suffering a shoulder injury.

High School: Placed third with Owensboro Catholic in the Kentucky state championships in her senior season … Owensboro Catholic was the 2007 and 2008 District and Region champions … A member of the 2008 All-State squad … Team MVP in both her junior and senior seasons … Paced the squad with 34 RBI … Batted .354 as a senior with 11 extra base hits … Was a 4.0 student … Named first team Academic All-State in each of her four years in high school … Awarded the 2008 Owensboro Catholic Liz Lukschu Outstanding Female Athlete Award … Also a four-year letterwinner in basketball … Owensboro Catholic’s girls basketball team claimed the 2007 and 2008 Regional and District crowns … Named to the All-Region as a senior, while also being named to the Messenger Inquirer second team in both her junior and senior seasons in basketball … Tabbed the MVP of her squad as a senior, while also winning the KHSAA Sportsmanship award.