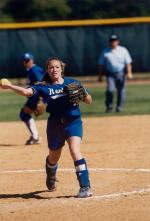 Kirchner on Howland: “Jen deserves to have a great senior season. She is a hard working player with a great passion for the game. She will provide valuable innings on the mound and at first base.”

2000 – Started 58 of 59 games… Had nine RBIs and three doubles… Made 22 appearances as a pitcher… Had an earned run average of 2.30… Is in the top three on UK’s single season lists for ERA (2.30), shutouts (4) and opponent batting average (.258)… Is in the top five individual single season records for wins with 10… Earned fourth career shutout in Kentucky’s first victory of the 2000 season against Purdue… Versus Akron, struck out two batters and did not allow a hit… Hit into a fielder’s choice to score a runner against Florida… Set a record against Morehead State for playing four different positions in one game and has now played all nine positions… Inducted into the Omicron Delta Kappa Leadership Society??? Named Academic All-Southeastern Conference.

High School – Earned four varsity letters from Deer Valley High School… Was a member of the 1998 5A State Champions that were ranked No. 10 nationally by USA Today… Posted a pitching record of 21-1 during senior season… Named 1998 first team All-Arizona pitcher… Earned All-City and All-Region honors in 1996, 1997 and 1998… Named 1998 Co-Player of the Year for the city of Glendale… Earned MVP and Most Outstanding defensive player honors in 1998… Was a member of the 1997 state semi-finalist team and the 1996 state runner-up team… Was a member of the 1992 ASA National Champions… Named to Who’s Who Among American High School Students and National Honor Society in 1997 and 1998.

Personal – Jennifer Marie Howland was born on March 7, 1980… The daughter of Debbie and Cully Howland.

Q&A with Howland
Favorite movie: “American Pie”Favorite band: JaRule
Favorite type of food: Mexican
I wear #11 because: I have worn it since I was 10 years old and I have had many accomplishments wearing it.
My favorite sport other than softball is: Basketball
If I could see only one professional sports team play, it would be: Arizona Diamondbacks
If a movie was to be made about me, I would like this person to portray me: Sandra Bullock
The person I admire most is: Mom and Dad