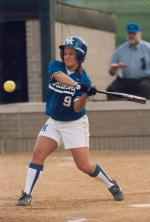 Kirchner on Dardis: “Jamie has started to mature as a person and as a player. This fall her offense has really improved. If we can get her to be more aggressive defensively, she will battle for time at first base.”

2000 – Started in all 50 games in which she played… Had 14 RBIs and 26 total bases… Tallied 411 catches… Ranks first on UK’s all-time list in single season putouts with 382 and is tied for the record for single game putouts with 15… Is in the top three for single season fielding percentage with .983.

Q&A with Dardis
Favorite movie: “Shawshank Redemption”
Favorite type of food: Spaghetti
I wear #9 because: It’s been my number since I was 8 years old
My favorite sport other than softball is: Basketball
If I could see only one professional sports team play, it would be: Atlanta Braves
If a movie was to be made about me, I would like this person to portray me: Julia Roberts
The person I admire most is: My dad
My favorite holiday is: My birthday