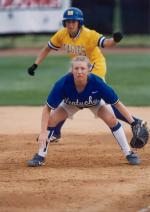 Kirchner on Eilertson: “Andy was one of our hottest hitters in the fall. Look for her to really make a move offensively. If she hits, she will play either at first base or in the outfield. Andy is ready for a breakout season.”

2000 – Started all 65 games… Tallied 29 hits, 14 runs, two doubles, 18 RBIs and a home run… Second on team in assists with 124… In an individual single season, is in the top three for games played (65), games started (65), and sacrifice flies (3)… Recorded first-ever home run versus Louisiana-Monroe… Had game-winning RBI versus Louisville as well as going 2-for-3 and scoring one run.

High School – Lettered five years at Anamosa High School… Earned first team All-State honors in 1996, 1997 and 1998… Named to All-District team in 1995, 1996, 1997 and 1998… Selected to All-Conference team in 1994-1998… Received Bernie Sagau Outstanding Athlete Award in 1998… Holds Anamosa career records for most hits, RBIs, batting average and extra base hits in a season… Lettered for three years in basketball and volleyball.

Personal – Andrea Deb Eilertson was born on October 25, 1979… The daughter of Mark and PJ Yusten, Rocky and Cindy Eilertson.

Q&A with Eilertson
Favorite movie: “American Beauty”
Favorite band: James Taylor
Favorite type of food: Tacos
I wear #3 because: The third time???s a charm
My favorite sport other than softball is: Basketball, handball
If I could see only one professional sports team play, it would be: Minnesota Vikings
If a movie was to be made about me, I would like this person to portray me: Angelina Jolie
The person I admire most is: my grandfather, Bud Heasley