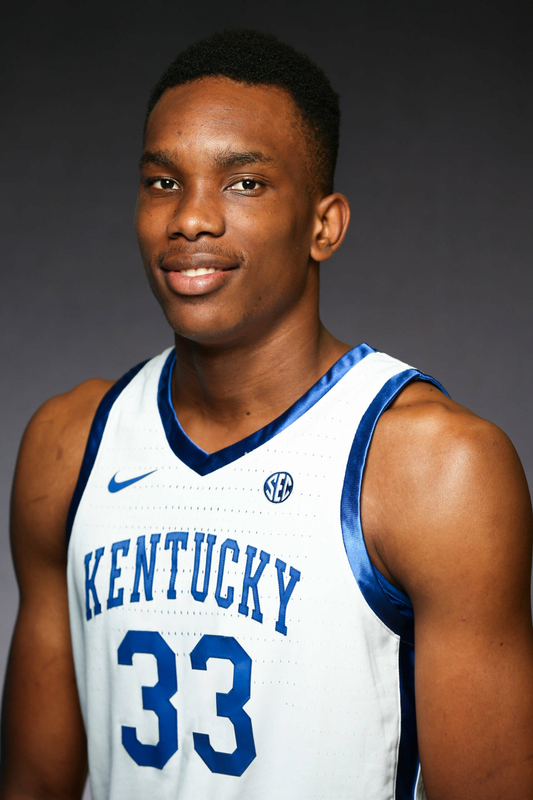 HIGH SCHOOL
Reclassified to the 2022 class … Ranked as a top-25 prospect in the 2023 class by all of the major scouting services … Spent his senior season at Putnam Science Academy in Connecticut, the same program that former Wildcat Hamidou Diallo hailed from … Joined Putnam in January and the squad was a perfect 20-0 with Onyenso on the roster, including winning a national championship … Averaged 11.4 points, 9.0 rebounds and 5.7 blocks per game … Also shot 64.4% from the floor and had five games with at least 10 blocked shots … Had a 24-point, 11-rebound and 11-block triple-double … Playing at the NBA Academy Games in the summer of 2022, he scored in double figures in each of the six games he appeared … Averaged 13.2 points, 9.2 rebounds and 2.7 blocks per game, while also connecting on 64.4% of his field-goal attempts … Registered 32 total boards (5.3 per game) on the offensive end … Prior to enrolling at Putnam, he attended NBA Academy Africa for more than two years … During his time with the academy, he participated in a number of high-profile international competitions in Europe, Mexico and the United States, including the Tarkanian Classic and NBA Academy exhibition games … He helped NBA Academy Africa win the European Youth Basketball League Tournament in Hungary … In February of 2020, he became one of the youngest players ever to make the senior men’s Nigerian National Team … Made his debut with the team at the FIBA Basketball World Cup 2023 African Qualifiers in November of 2021 … Scored 10 points on 5-of-8 shooting and had four rebounds and two blocks in 16 minutes in a 96-69 win over Uganda.

PERSONAL
Born Sept. 25 in Owerri, Imo State, Nigeria … Parents are Martins and Lilian Chinyere … Has four siblings, Ikenna, Chiwendu, Chidinma and Queen … His mom is his life’s greatest influence … Enjoys listening to music and playing video games away from the court … His pregame playlist consists of Lil Durk and Lil Baby … Superpower he most wishes he had is the ability to teleport … Giannis Antetokounmpo is his favorite basketball player and Anthony Davis is his favorite former UK player … Lists his most memorable moment as a basketball player as helping his high school win a national championship … Chose Kentucky over the University of Oklahoma, Oklahoma State and Kansas.