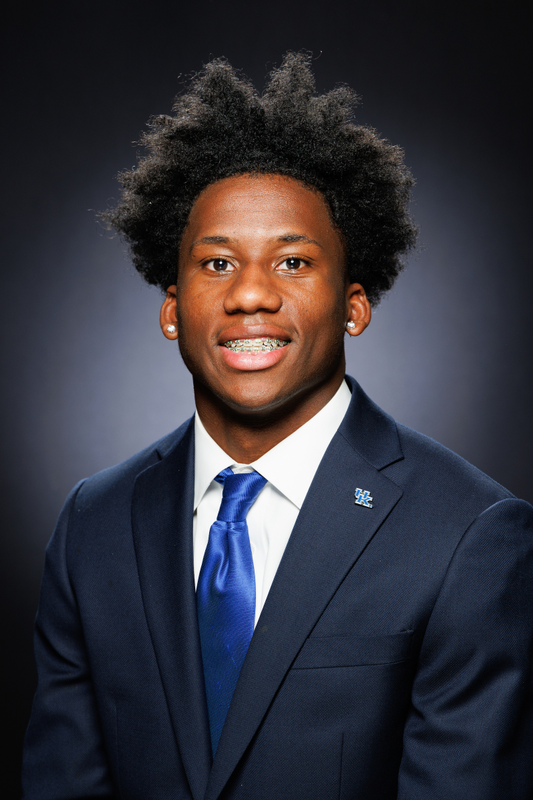 High School
• Speedy wide receiver has been Ɵ med as fast as 4.28 seconds in the 40-yard dash
• Consensus three-star prospect
• The No. 26 prospect in talent-rich Ohio and one of the nation’s top 150 wide receivers as evaluated by ESPN
• Played at perennial power Archbishop Moeller High School in Cincinnati
• Caught four passes for 165 yards and two touchdowns in the season opener of his senior year but missed much of the season because of injury
• Returned before the end of the season and helped Moeller to an 11-4 record, the regional championship, and the semifinals of the state playoff s in Division I, the largest classification in
Ohio
• Coached by Mark Elder
• Also excelled on the track, competing in the 100- and 200-meter races for Archbishop Moeller
• Ran a personal best 10.30 in the 100-meter dash at the 2022 OHSAA D1 Southwest District Outdoor Championships, finishing second
• Won the OHSAA D1 Region 4 championship title in the 100m with a Ɵ me of 10.69
• Placed third in the 2022 OHSAA D1 State Track & Field Championships in the 100m with a time of 10.59
• Competed at the 2022 Adidas Indoor Track and Field Nationals and posted an impressive 6.82 in the 60m final, earning him a top-3 finish and All-America honors
• Broke the Indoor State Meet 60m dash record with a time of 6.73
• Reunites on the football field with high school teammates Josh Kattus and Carrington Valentine
• Picked Kentucky over West Virginia, Akron, Bowling Green and Marshall

Personal
• Born in Cincinnati , Ohio
• Son of Jeanita Cummings and Ben White
• Has four siblings, Beniria, Bryson, Bryan and Ben
• Mother, Jeanita, played basketball at Mississippi State, while dad, Ben, was a running back at Mississippi State
• Major is undecided

Brandon Says
• Nickname is “B-White”
• He chose to play at Kentucky because it was a good fit and to play in the SEC
• Other than play in the NFL, his dream job is to be the CEO of his own company
• Three words to describe athletic, funny, and loving
• The person who motivates him to work hard is his mother because she’s sacrificed so much for his family