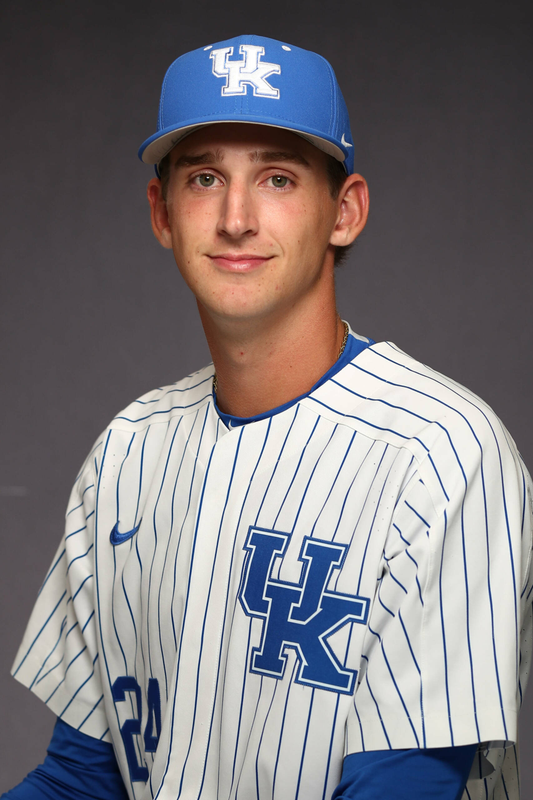 Pitched for both the Wareham Gatemen of the Cape Cod League and the Upper Valley Nighthawks of the New England Collegiate Baseball League…In three starts (six total appearances with Upper Valley he had a 2.87 earned run average in 15.2 innings…He struck out 19 and had one save…His WHIP was just 1.28.

Appeared in nine games with seven starts, including the season opener…Went 2-2 with a 3.00 ERA in 24.0 innings…Allowed just 17 hits and held opponents to a .195 batting average against, the fifth-lowest by a UK freshman with at least 20 IP since 1979…Struck out 28 and walked 15…Left-handers hit just .175 against him (7-of-40)…Opponents hit a team-low .143 against him with runners on base…Started the season opener vs. Miami (Ohio) and struck out the side in the first inning…Made his first SEC start on the road at No. 5 Mississippi State…Suffered a minor injury that limited his innings over the final six weeks of the season.

HIGH SCHOOL
One of the top arms in the 2020 high school ranks and the highest ranked player in Kentucky’s class…Ranked the No. 8 right-handed pitcher and No. 26 overall player in the class by Perfect Game…Was the No. 2 player overall and top pitcher from Tennessee by both Perfect Game and Prep Baseball Report…PBR ranked him the No. 47 overall player in the country and No. 13 right-handed pitcher…Ranked the No. 56 overall player in the class by Under Armour Baseball Factory…Coached by Matt Buckner at Farragut HS, which won the state championship in 2019…Lengthy list of individual honors, including 2019 Tennessee Player of the Year (Perfect Game and TBCA), preseason First-Team All-American (Perfect Game and Collegiate Baseball)…Played summer baseball for Exposure, the same club that produced current UK star John Rhodes.

PERSONAL
Full name is Ryan Matthew Hagenow…Born in Las Vegas, Nev….Son of Matt and Karen…Brother, Jake, is a catcher at Middle Tennessee State…Another brother, Brett, was a catcher at Carson Newman University…Picked UK because of the coaching staff and track record of development…Turned the rare quadruple play in T-ball at 5-years old.