The Wildcats are scheduled to play a total of 20 dual matches on the year, 11 of which will be held in Lexington. UK is also set to serve as one of 15 hosts for the 2023 ITA Kickoff Weekend.

After its opening bout with Dayton, Kentucky will move on to face both Illinois (Jan. 21) and Northern Kentucky (Jan. 24) in Lexington before hosting Notre Dame, Washington and Liberty for ITA Kickoff Weekend, Jan. 27-29. The winner of the kickoff event will advance to the 2023 ITA Division I National Men’s Team Indoor Championships at the University of Illinois, Feb. 16-19.

The team begins the month of February with its first road-trip of the year as the Cats head to Virginia to take on both UVA (Feb. 3) and Virginia Tech (Feb. 5).

The non-conference portion of the schedule concludes with a road affair at Louisville, Feb. 10, followed by a home match against Duke on Feb. 12.

This year’s SEC Championship Tournament will be played April 19-23 at the Yarbrough Tennis Center on the campus of Auburn University.

The Wildcats are coming off their best season in program history in 2022, finishing as the National Runner-Up after reaching the NCAA Championship title match as the No. 8 seed. UK finished the year with a 26-8 record and a 10-2 mark in the SEC. Both Gabriel Diallo and Liam Draxl received ITA All-American honors, ending the season ranked Nos. 6 and 8, respectively, in the ITA singles rankings. 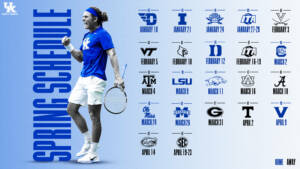