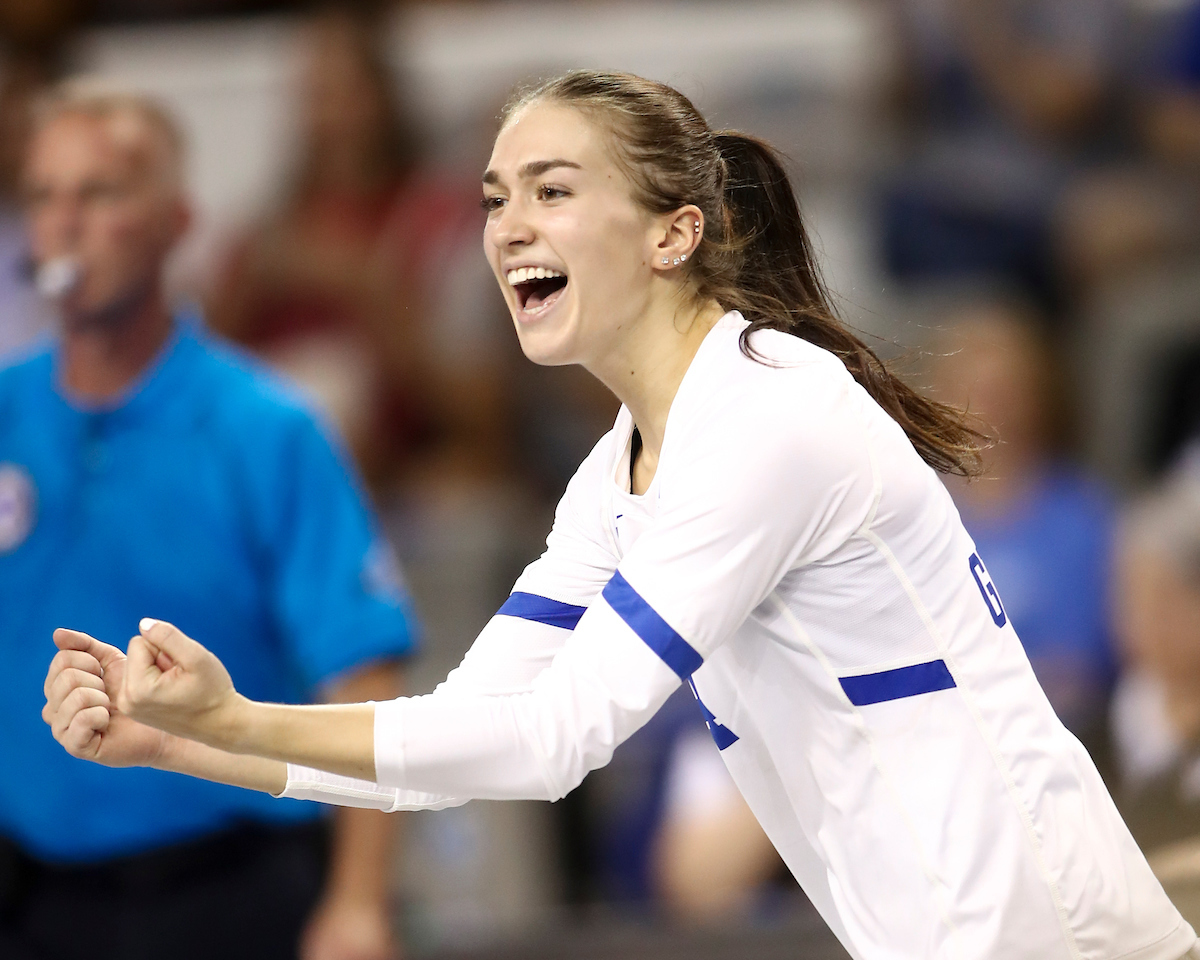 Grome’s 54 Assists Sends No. 19 Kentucky Past MSU in Four

STARKVILLE, Miss. – Sophomore setter Emma Grome had 54 assists and 19 digs Friday night as the No. 19 Kentucky Volleyball team powered past Mississippi State in a packed Newell-Grissom Volleyball Center in Starkville.

Grome’s 54 assists were a key to hitting .308 as an offensive unit Friday night, with three different UK players notching 10+ kills in the match, led by SEC Player of the Year candidate, Reagan Rutherford’s 19. Adanna Rollins had 14 terminations with Azhani Tealer logging 13 more kills as Tealer hit .400 with five digs, a new career high, and six blocks.

The floor defense for UK was sparkling as always, holding MSU to .170 for the match and .118 in the fourth set along with Grome’s 19 digs leading the way, 13 from Eleanor Beavin and 12 from freshman Audrey Whitworth.

As a result of Friday night’s win, Kentucky is 16-6 overall, its highest mark above .500 all season, and is now 11-2 in Southeastern Conference play sitting tied atop the league standings with Florida.

Kentucky will play its final Wednesday night match of the season inside Memorial Coliseum on Nov. 16 against Tennessee at 7 p.m. ET. The match will be shown live on SEC Network+ and the ESPN app. Tickets are available at UKathletics.com.

It was an extremely rocky start for Kentucky, who got off to its worst start in quite some time to a set, as Craig Skinner had to call a timeout trailing 10-4 in the opener. UK dug itself a 0-3 hole and it ballooned to a six-point MSU edge before Skinner elected to stop play and call the timeout following UK’s fourth attack error out of the blocks. Kentucky out of the timeout won three points in a row to close the gap and a block by Elise Goetzinger on the right side tied the set up at 13-13 for the first time in the match since the start. Kentucky never led, though, as the Bulldogs went on a 3-1 run to take a 22-19 lead late in the frame as UK had to expend its final timeout of the set down three points and MSU three points away from the opener. Kentucky closed the gap to 24-23, but lost the point out of an MSU timeout and the Bulldogs took the 1-0 lead. UK hit .312 in the set with six hitting errors.

Kentucky grabbed its first lead of entire match at 4-3 in the second set on a kill from Azhani Tealer out of the middle of the court. MSU won two long-extended rallies to get the lead back at 14-12 before a 3-0 UK run, its largest of the match to that point, pushed the Wildcats into the lead headed to the media timeout. The rally for UK extended into the opening two points out of the break to make things 17-14 and State called its first timeout of the set trailing by a match-high three points. Kentucky ballooned the run to 7-0 as it took a 20-15 lead and with a five-point edge, it marked the Wildcats biggest lead of the match. MSU won three-straight points with two of them on out-of-system kills to close the gap to just two at 20-18 and UK called its first timeout. Kentucky then sided out at 100 percent down the stretch in the final three opportunities and closed out the second set, 25-21 to even the match at one set all.

The third set began much like the first with Kentucky getting off to a slow start yet again and a 5-0 MSU run giving the Bulldogs a 9-5 lead as the Wildcats were forced into an early timeout in the proceedings trailing 9-5. Kentucky stopped the bleeding of the run with a sideout from Reagan Rutherford and then won a second challenge on a touch call to bring UK back into the picture at 10-8. A 4-0 run on Azhani Tealer’s serve included an ace and two long-rally terminations from Adanna Rollins, including a thunderous kill from the left pin to give UK the 17-15 lead and push the Bulldogs into a timeout called, their first of the proceedings in the third set. Kentucky then took a 20-17 lead on Rollins’ 11th kill of the match to bring MSU into a second timeout. The Wildcats hit .333 in the frame and had just two hitting errors to close the books on a 25-20 third set and took a 2-1 lead overall in the match.

Kentucky trailed 4-3 in the fourth set, but then came exploding out of the blocks to take an 11-8 lead and furthermore, a 16-9 lead that forced MSU into both of its timeouts before the Bulldogs got to 10 points. Rutherford was up to 16 kills for the match to that point at 16-9 and had just three errors to go with those 16 kills on 35 swings for a .371 efficiency percentage. The Wildcats used Bella Bell and Azhani Tealer in the middle to combat the swings from the Bulldogs and had 10 blocks at that point in the match to the Bulldogs five, doubling the MSU output defensively at the net. The Wildcats ran away and hid late in the fourth, closing out a 25-15 fourth set win. 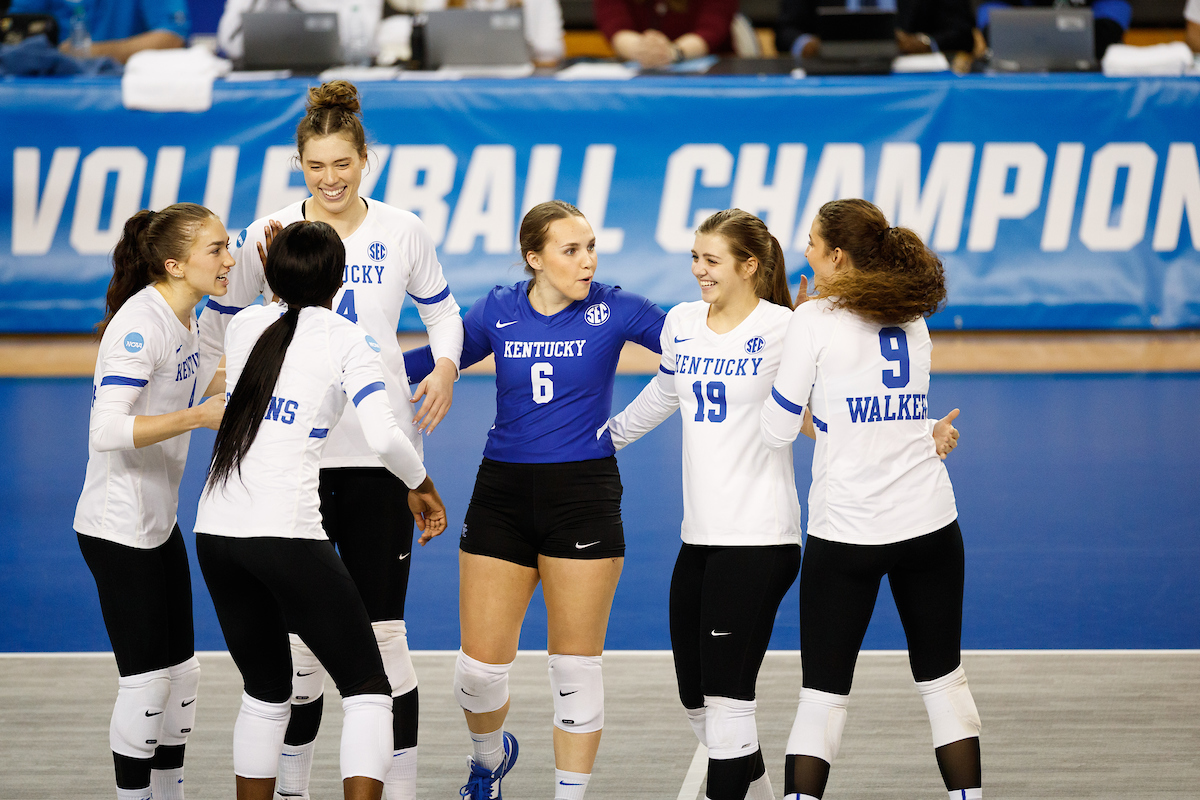 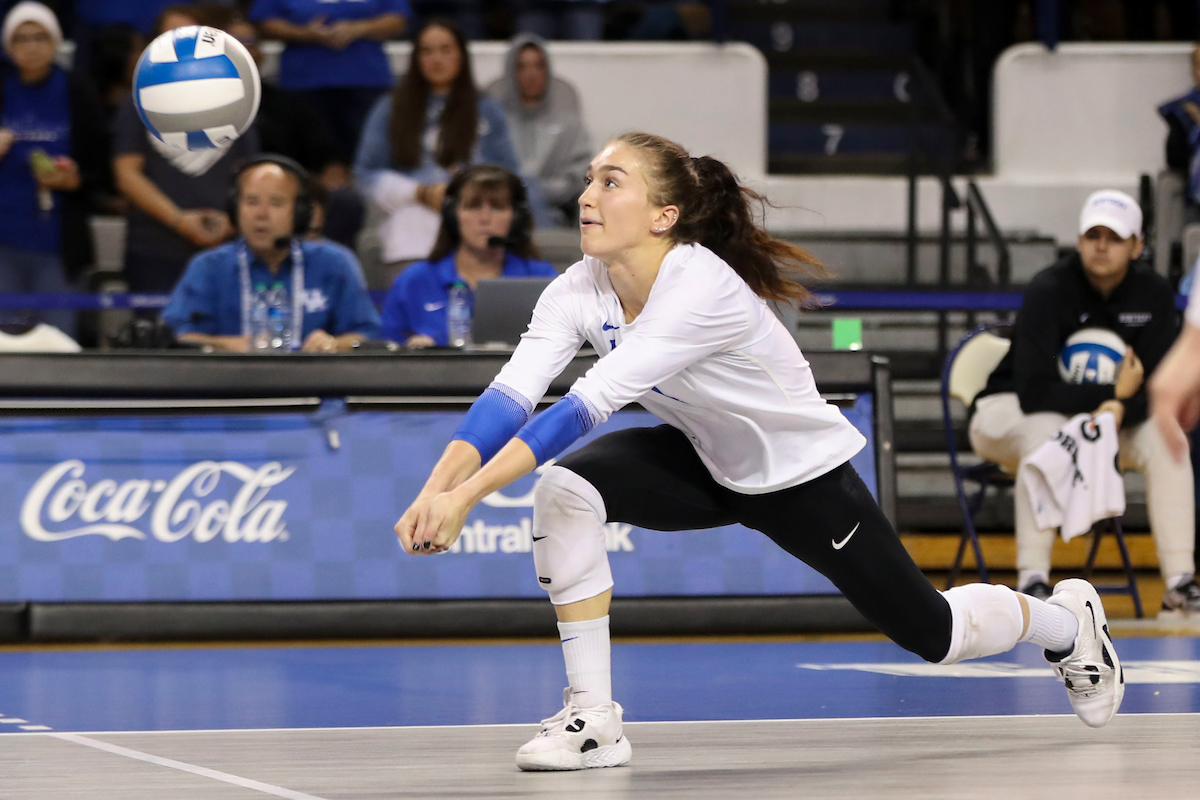 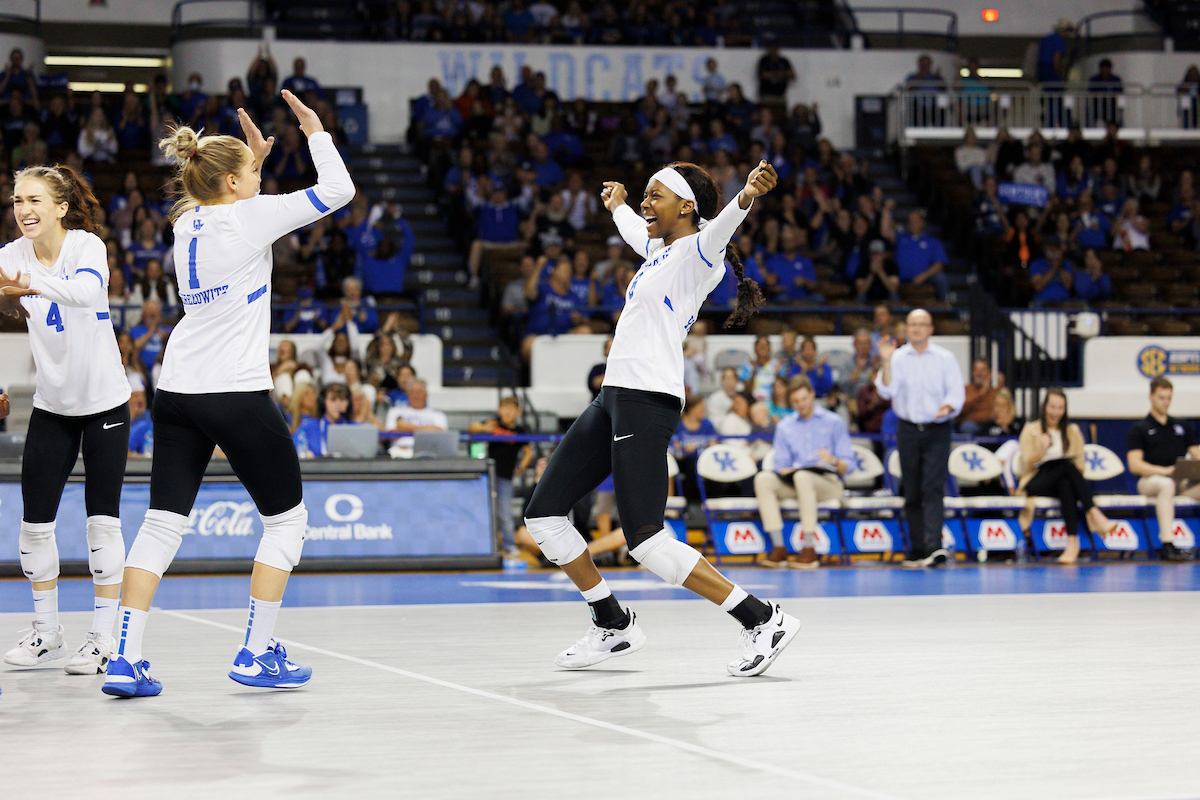