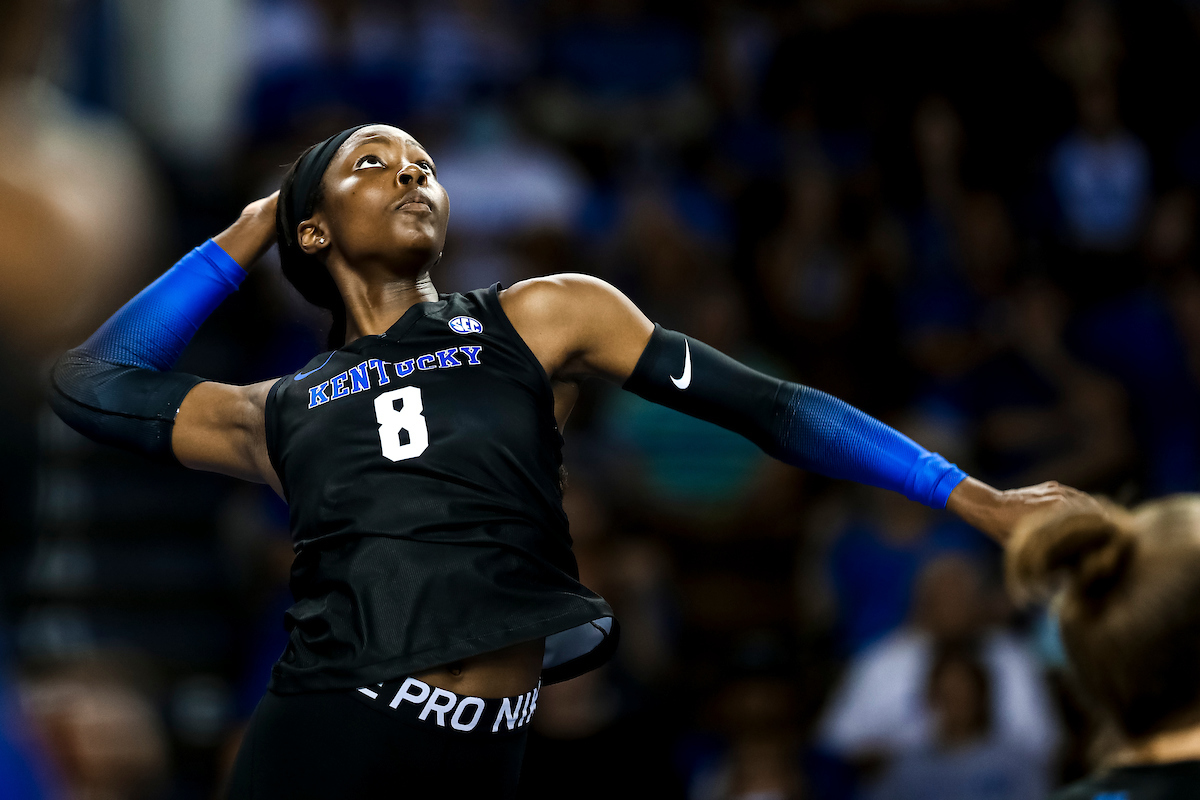 College student-athletes who enter the transfer portal do not necessarily have easy roads ahead of them. In addition to leaving a school they had previously chosen, these transfers must adapt to a new location, a new coaching staff, new teammates and a new conference, which makes the transfer process even more challenging.

However, sometimes things work out even better than expected. That has been the case so far for Adanna Rollins, a recent addition to the Kentucky volleyball program, who transferred from Penn State. So far, Rollins has made transferring look easy.

The key to success for Rollins is to possess a ‘go with the flow’ attitude eliminating any high expectations for the portal.

“I decided to just put my name in the portal to see what happens and see if I get anything,” Rollins said. “The first person to reach out to me was (UK head coach) Craig (Skinner). He told me his goals for me and I told him my goals and it just seemed like a good fit.”

Rollins knows that there is a difference between Big 10 volleyball, where she previously played (at both Minnesota and Penn State) and the Southeastern Conference. However, she also knows that landing with the five-time defending SEC champions is exactly where she wants to be.

“Big 10 is second to none. Awesome, really good volleyball,” Rollins said. “But this (Kentucky team) is probably one of the most competitive teams I’ve been on. Nobody is afraid to get on each other or hold each other accountable.”

The competitive nature Rollins has found here at Kentucky seems to have brought out the best in Rollins. That showed on opening night when the Texas native had a career-high 28 kills on 55 swings against Marquette on Aug. 26 in Memorial Coliseum. Rollins thinks there could be even bigger matches still to come.

“I haven’t reached my ceiling. I have more to give,” Rollins said. “Having 28 kills makes me confident because I know where I can go now, and I know I have it in me.”

Making the move to Lexington was not the first time Rollins had experienced being a transfer She spent her first three seasons at Minnesota as a Golden Gopher in Minneapolis before joining the Lions at Penn State. Her prior experience with the process helps Rollins continue to adapt to new situations.

“I’ve had a different setter every year. I’m used to whatever,” Rollins said. “Setters want to impress their hitters, so if I make a mistake, I’ll own up to it.”

Rollins has a spirit of strength, faithfulness, determination, and toughness embodying the personality of the UK mascot, the Wildcat. Her ease and adaptability is truly inspiring to others.

“I try to remember to take it one step at a time,” Rollins said. “Whatever life throws at me I won’t complain. It’s going to be what it’s going to be.”

With her emergence early in the 2022 season, Rollins has proven her worth to the team already. She knows she has much more to give to the Big Blue Nation. Her passion and eagerness to succeed is evident.

Rollins will continue to be a positive light and competitor on this year’s team making the most of her season of many ‘firsts’ and ‘lasts’ at UK.