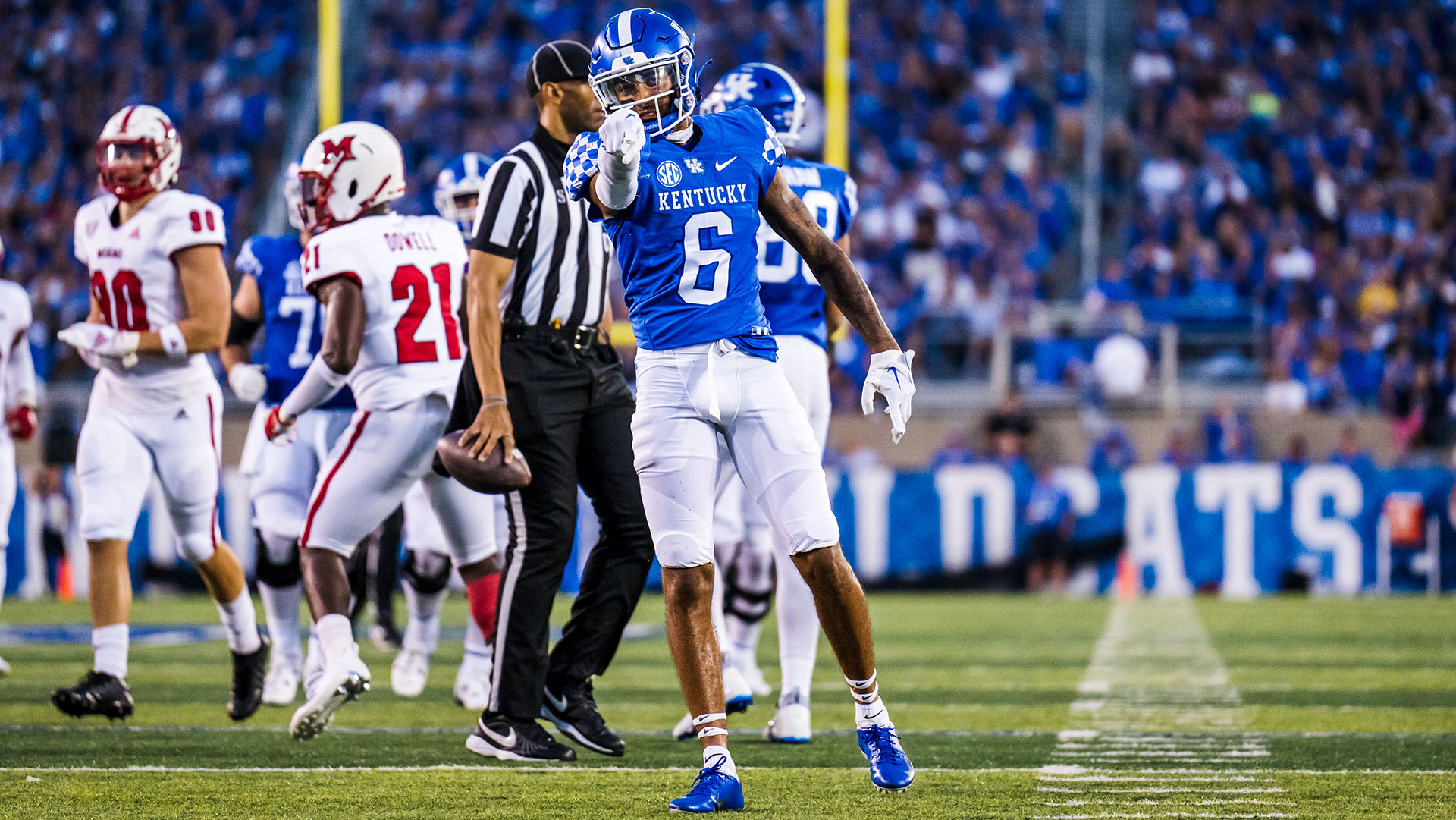 LEXINGTON, Ky. – Quarterback Will Levis passed for 303 yards and three touchdowns as No. 20/21 Kentucky opened the 2022 season with a 37-13 win over Miami (Ohio) on Saturday night at Kroger Field.

Tayvion Robinson, playing in his first game as a Cat, caught six passes for 136 yards, while true freshman Dane Key caught four passes for 53 yards and his first career touchdown.

It was Key’s classmate, Barion Brown, who electrified the crowd, and broke open the game, with a 100-yard kickoff return for a touchdown to begin the second half.

The UK defense allowed just 290 total yards in the game. DeAndre Square led UK with seven tackles, while another true freshman, Alex Afari, had six tackles, including one and a half tackles for loss and his first career sack.

Miami took the opening possession of the game, beginning at their own 25. The RedHawks got 43 yards passing from quarterback Brett Gabbert, driving deep into UK territory. Then, running back Tyre Shelton went off left tackle, broke through the UK secondary and scored, giving Miami the lead. Graham Nicholson added the point after and the RedHawks led 7-0 with 9:39 to play in the first quarter.

Kentucky took over and the Cats got a big play immediately. Levis connected with Robinson, who broke a couple of tackles on his way to a 45-yard gain on UK’s first play from scrimmage. UK would get into the red zone when Levis connected with Key for a 19-yard gain, getting to the Miami six yard line. Two plays later, Levis hit tight end Brendan Bates with a touchdown pass in the front left corner of the end zone. Matt Ruffolo added the PAT and the game was tied 7-7 with 7:29 to play in the first period.

Miami would get one first down on its next possession before the UK defense forced a punt. Kentucky would take the ensuing possession and methodically march into Miami territory. The first period would come to an end with the game still tied 7-7 and the Cats on the Miami 25 yard line.

Kentucky would get into the Miami red zone early in the second. Then, on fourth and two from the Miami four yard line, Levis was intercepted by Miami’s Eli Blakey. The RedHawks would take over on their own six with 12:36 left in the half.

The RedHawks could not take advantage of the turnover. Miami would have a third-and-four from their own 12 when Gabbert’s pass was broken up by Carrington Valentine. Then, the RedHawks punt was partially blocked by UK’s JJ Weaver, giving UK the ball at the Miami 32 with 11:08 left in the half.

Kentucky would get a big play on first down when Levis hit Key again, this time for a 17-yard completion. But the Cats’ drive stalled and UK was forced to settle for a 34-yard Ruffolo field goal. The super senior converted it and the Cats led 10-7 with 9:22 to play in the half.

Miami responded with a scoring drive of its own. The RedHawks got into UK territory by covering 45 yards in just seven plays before the Cats came up with a defensive stop. That forced Miami into a 48-yard field goal that Nicholson converted, tying the game at 10-10 with 6:10 remaining in the half.

The next two possessions went three-and-out, one by each team. The Cats took over on their own 16 with 2:04 left in the half. The drive appeared to be going nowhere until Levis hit Robinson across the middle for a 41-yard gain. Levis then hit Kavosiey Smoke with a screen pass for a 10-yard gain, setting the Cats up at the Miami 19 with 19 seconds left in the half.

JuTahn McClain would rush for six yards on the next play, which was followed by a UK timeout with 14 seconds to play in the half. Levis and Robinson connected again on the next play, getting UK to the Miami seven with six seconds left on the clock. On the next play, Levis could not find an open receiver and threw the ball away. That set up another Ruffolo field goal attempt, this one from 25 yards, that the super senior nailed as time expired in the half with the Cats holding a 13-10 advantage.

The Cats would start the second half with a bang. Brown took the second half kickoff and raced down the left sideline, outrunning the Miami defense for a 100-yard kickoff return touchdown. It was Brown’s first career touchdown and it, combined with Ruffolo’s PAT, gave UK a 20-10 lead just 13 seconds into the second half.

Miami took possession but, on the second play from scrimmage, Tyrell Ajian forced a Jaylor Bestor fumble that was recovered by UK’s Keidron Smith, who returned it to the eight yard line. On the second play of the ensuing drive, Levis connected with Chauncey Magwood in the end zone for an eight-yard score. It was Magwood’s first career touchdown. Ruffolo nailed the point after and Kentucky led 27-10 with 13:58 still to play in the third quarter.

The teams would exchange punts, but the Cats got the better end of that deal when Robinson returned the Miami punt 23 yards to the RedHawks 48 yard line.

Kentucky would get one first down on the next drive but the drive ultimately stalled. UK called on Ruffolo again and again he delivered, this time from 50 yards out, giving the Cats a 30-13 lead with 1:09 left in the third quarter.

Early in the fourth quarter, Miami was forced to punt again and the Cats took over on their own 16 with 12:58 to play. The Cats would move the ball methodically until Levis hit Brown on a 38-yard completion, getting UK within striking distance. Key would draw a pass interference penalty in the end zone and, three plays later, he would catch his first collegiate touchdown, a one-yard strike from Levis. Ruffolo added the PAT and UK led 37-13 with 7:46 remaining.

From there, the Cats would run out the clock and would open the season with a 24-point win.

Kentucky returns to action next Saturday, hitting the road for the first time and opening Southeastern Conference play at Florida. Kickoff is set for 7 p.m. ET and the game can be seen on ESPN.