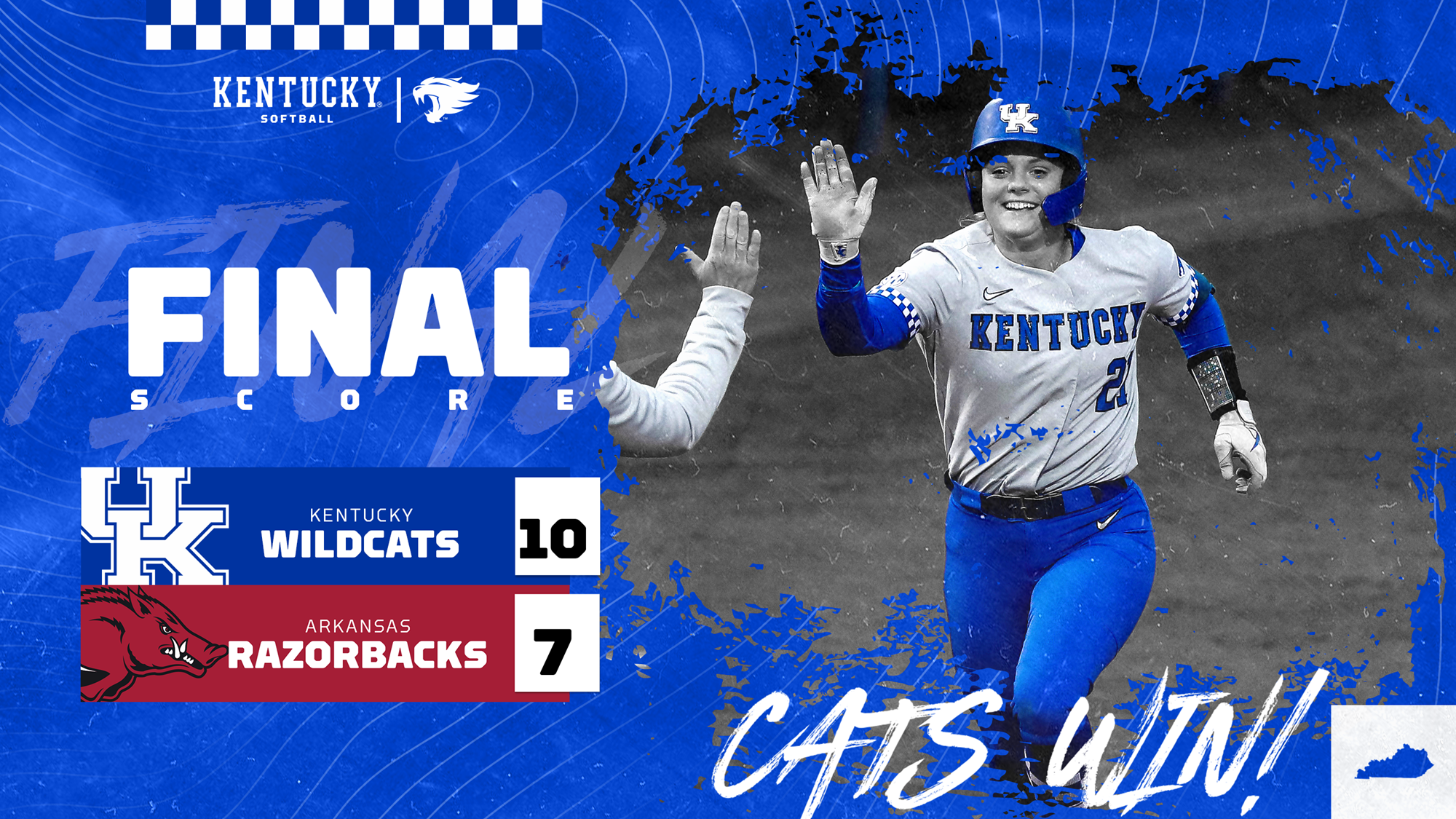 Coffel and Spangler Propel No. 8 Kentucky to 10-7 Comeback Win

FAYETTEVILLE, Ark. – The No. 8 Kentucky Softball team scored nine unanswered runs to come from a six-run deficit as Erin Coffel hit two home runs and went 4-for-4 and senior pitcher Tatum Spangler pitched four shutout innings as it evened the series with No. 6 Arkansas thanks to a 10-7 win at Bogle Park.

Kentucky found itself down 7-1 at the end of the fourth inning and promptly scored six runs to tie the game in the top of the fourth inning to make it 7-7 and scored three runs thanks to home runs from Erin Coffel and Miranda Stoddard in the seventh to win the game, 10-7.

The rubber match of the series is Sunday morning at Noon ET/11 a.m. CT and will be broadcasted live on SEC Network+, ESPN+ and the ESPN app. The winner of Sunday’s game will be guaranteed to be tied atop the top of the Southeastern Conference standings.

Coffel went 4-for-4 in the game, with RBI’s in three of her four at-bats. The sophomore from Bremen, Indiana had an RBI single in the first to give Kentucky a 1-0 lead in the top of the first, a single in the third, a three-run, game-tying home run in the fourth and the go-ahead long ball in the seventh to give Kentucky the 8-7 lead.

Spangler entered the game in the fourth inning and threw four scoreless innings to pick up her fourth SEC win of the season. The senior from Henderson, Nevada struck out four batters and only allowed two hits to one of the best offenses in the SEC.

Key Play
With runners on the corners and no outs, Tatum Spangler turned a 1-3 double play and struck out Danielle Gibson on a changeup to end the inning.

Key Player
Erin Coffel was the key player in the game, going 4-for-4 at the plate with five RBI.

Run Recap
Kayla Kowalik led off the game and scored on an Erin Coffel RBI single up the middle to score the game’s opening run in the top of the first. UK 1, ARK 0

Arkansas scored three runs in the bottom of the first on two RBI hits. ARK 3, UK 1

In the bottom of the second, Spencer Prigge hit her first-career home run. ARK 5, UK 1

Arkansas’ lead ballooned to 7-1 thanks to back-to-back homers in the bottom of the third. ARK 7, UK 1

Kentucky scored six runs in the top of the fourth to respond and tie the game, batting around in the inning. Taylor Ebbs and Tatum Spangler had back-to-back RBI doubles and Kayla Kowalik drove in a run on a bloop shot into center. After Rylea Smith singled, Erin Coffel stepped up and launched a pitch to the berm in left field to tie the game improbably. UK 7, ARK 7

In the top of the seventh, Erin Coffel hit the go-ahead home run to give UK the lead back at 8-7 and following a single by Lauren Johnson, Miranda Stoddard hit her seventh HR of the season to CF to score a pair. FINAL – Kentucky 10, Arkansas 7