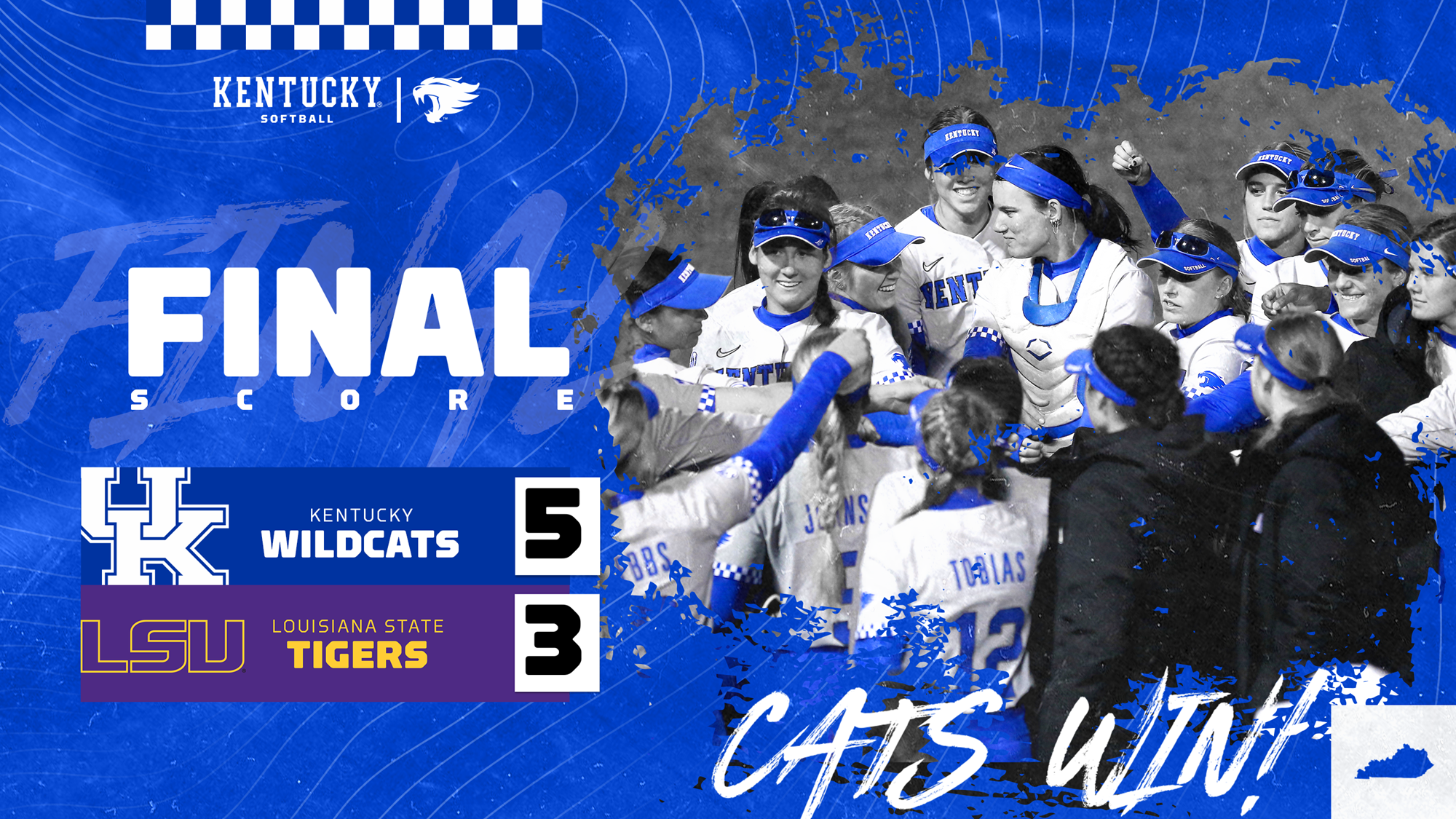 BATON ROUGE, La. – Meeko Harrison had her biggest moment as a Kentucky Wildcat on Sunday afternoon, recording a two-out, two-run single in the top of the seventh inning to give Kentucky its first lead of the day as No. 8 Kentucky eked out a 5-3 win over No. 20 LSU to sweep the Tigers in Baton Rouge for the first time since 2016.

Tatum Spangler picked up her third win in a row, pitching the final 1.1 innings of the game, including the game-winning strikeout in the bottom of the seventh with the tying run on base. She won all three games vs. LSU this weekend and only allowed one earned run in those contests.

Kentucky had 13 hits on the day, outhitting LSU 13-7 and the Tigers had four untimely errors in the game with UK not committing an error in the game.

The win for Kentucky marked its third come-from-behind win of the series, as Kentucky trailed at some point in all three games of the weekend, but rallied to win all three of them to improve to 6-3 on the season in Southeastern Conference season.

Kentucky will play at Louisville on Wednesday night at 7 p.m. ET in the annual “Battle of the Bluegrass” in the Derby City. The game will be shown live on ESPNU, ESPN+ and the ESPN app.

Key Play
Meeko Harrison’s two-out, two-RBI single up the middle in the top of the seventh inning was the key play of the game. Harrison stepped up with runners on second and third and two outs with UK trailing 3-2 before rocketing a first-pitch offering back up the middle for a base hit into center. That gave Kentucky the 4-3 lead, its first lead of the afternoon.

Key Player
Rylea Smith was the key player in the game going 3-for-5 at the plate, including three hits in her first three at bats. Smith tied the game in the top of the fourth inning on an RBI hit back up the box to score Tatum Spangler, who reached on an error to lead off the inning.

Key Stat
Renee Abernathy was the key player in Sunday’s win, as she drove in Erin Coffel in the top of the seventh inning with the second double in as many at bats for UK in the frame. The senior from Springfield, Illinois then scored on Harrison’s hit up the middle to tie the game. Abernathy was 2-for-4 in the game with a run scored and an RBI.

Run Recap
LSU scored on a wild pitch in the bottom of the second inning. LSU 1, UK 0

Kentucky tied the game in the top of the fourth inning as Tatum Spangler scored on a Rylea Smith single. UK 1, LSU 1

LSU scored twice on two different RBI hits in the bottom of the sixth inning to take the lead and need just three outs to win the game. LSU 3, UK 1

Erin Coffel and Renee Abernathy led off the top of the seventh inning with doubled to pull UK to within 3-2. Miranda Stoddard then singled to the left side to put runners on the corners with one out. Spangler grounded out, but moved the go-ahead run into scoring position and Harrison stepped up to launch a two-run single up the middle to give UK the lead. A throwing error and a fielding error by LSU allowed a fifth run to score. UK 5, LSU 3

In the bottom of the seventh, Tatum Spangler got a strikeout swinging to end the game with the tying run at the plate to secure the series sweep. FINAL – Kentucky 5, LSU 3