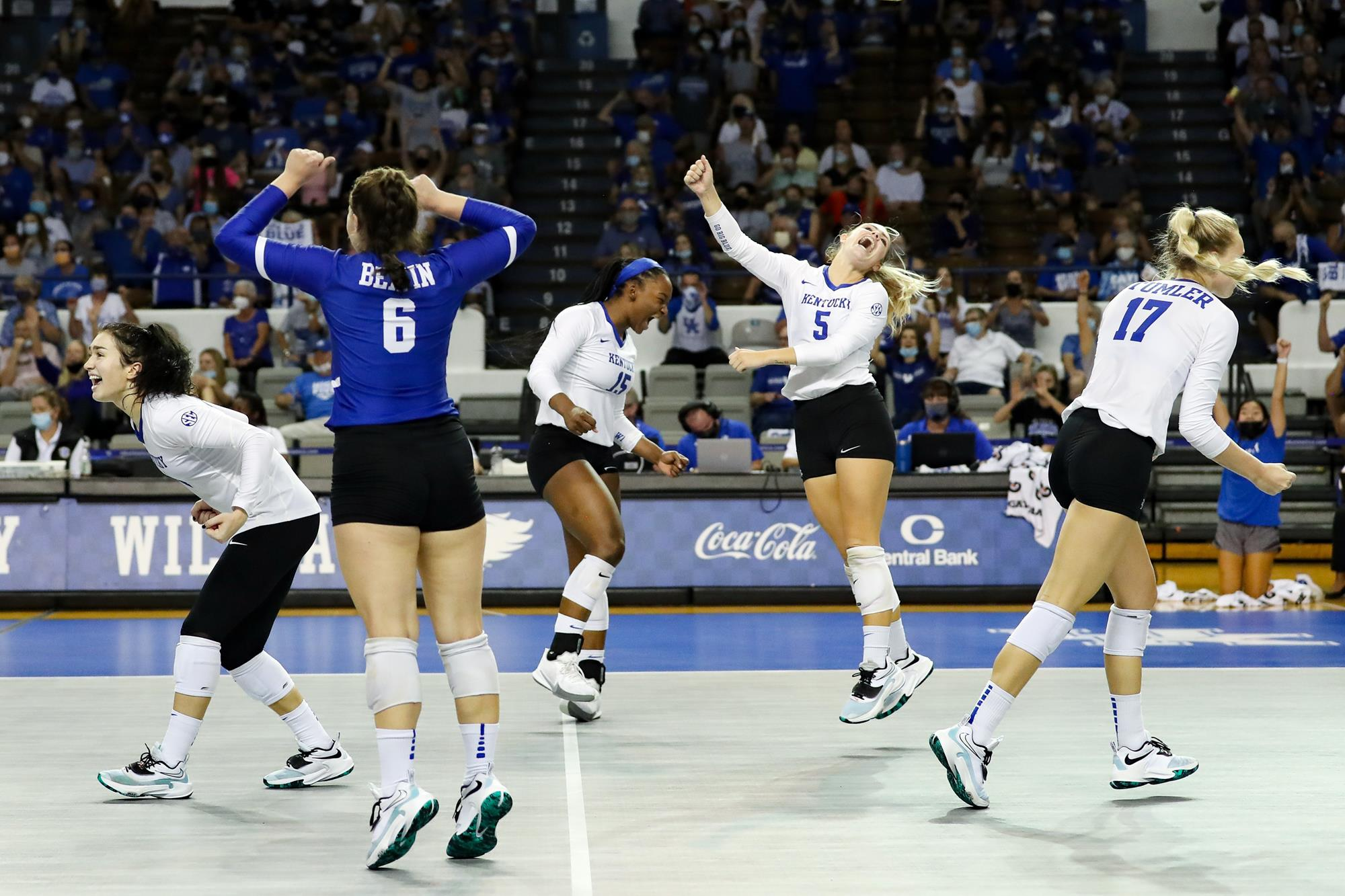 Skinner’s Six Fifth-Set Kills Propel No. 8 UK Past No. 16 Stanford

Skinner’s 24 kills were a new career-high, as she terminated the final three points of the match, including the last two from the back row as the Wildcats picked up a key non-conference win over the Cardinal in front of the eighth-largest crowd in program history.

Freshman setter Emma Grome had a new career-high 58 assists for the match and pulled the strings on the UK offense to the tune of a .304 hitting percentage. Grome, from Loveland, Ohio, also had seven digs, three kills and two blocks to turn in one of the most complete performances of her young career.

Junior Azhani Tealer had a career-high tying 18 kills in the match, hitting .412 with two critical aces and five blocks, including one solo stuff. Senior Alli Stumler had her second-straight double-double on Sunday, logging 10 kills and 15 digs. Her 15 digs tied a season high set Wednesday night.

Kentucky’s attention now turns to Southeastern Conference play, as the Wildcats will embark on an 18-match SEC schedule beginning Friday night at 8 p.m. ET on the SEC Network, ESPN3 and the ESPN app against Missouri. The match will be in Lexington and tickets are available at UKathletics.com/tickets.

Set One
Stanford took the early lead in set one, leading 13-7 after back-to-back points that pushed the Wildcats into an early timeout. At that point in the set, UK was not only trailing by seven, but had only recorded five kills in the match and was allowing Stanford to hit .667 with three multi-kill players for the Cardinal. Out of the timeout, Stanford grew its lead to 14-6, its largest of the set to that point on a kill from the right side. After Kentucky was creeping back into the set, the Cardinal went on a 3-0 run that spurred a 19-11 lead and the Wildcats called their final timeout of the set trailing by eight. Kentucky’s largest run of points in the set made it 20-16 Stanford, and the Cardinal elected to use their first timeout after UK ran off three in a row punctuated by an Azhani Tealer kill from the right side. Stanford closed out the set by siding out at 100 percent the rest of the frame and took the opener 25-20 hitting .567 to a 1-0 lead in the match.

Set Two
Kentucky created the first bit of separation in the second set after the halfway mark, leading 19-16 on an unbelievably athletic play by Madi Skinner from the left pin to put down a ball from Tharp in the middle of the court on a bump set. The entire set had been played within a two-point window with no team garnering any sort of momentum, but the 19-16 UK lead prompted a Cardinal timeout, their first of the set. Skinner’s 12th kill of the match put Kentucky up 22-18 and Stanford called its final timeout, down by four. A blocking error on the Cardinal ended the set with Kentucky taking the frame 25-20, closing out the set by winning eight of the final 12 points. Skinner ended the second set with 12 kills on just 21 swings, hitting over .500 for the match to that point with seven digs to go alongside.

Set Three
Stanford took a 15-13 lead into the media break of the third set with neither team able to generate much of a lead in the frame to that point with the 15-13 lead matching the largest for either team to that point in the set. A 3-0 service run by Lauren Tharp put the Wildcats up 19-18, their first lead in the set since it was 12-11 and Stanford elected to call its first timeout. Two points later, the Cardinal found itself trailing 21-18 on a muffed over pass and termination by Azhani Tealer and Stanford called its final timeout with UK leading, 21-18. A second 3-0 run to the set ended the frame 25-19 and Kentucky took a 2-1 lead in the match on the heels of Skinner’s 15 kills. Azhani Tealer had 13 kills for UK to that point in the match Alli Stumler charting dive kills and 10 digs, as she was one off of Skinner’s team-high 11 digs. UK took the 2-1 lead in the match hitting .347 in the match to that point with a .314 mark for the Cardinal.

Set Four
Stanford found itself trailing 5-1 early in the fourth set and was pushed into an early timeout as Madi Skinner’s 18th kill of the match sent Memorial Coliseum into pandemonium. UK’s lead was pushed out to as much as 10-4 in the early parts of the set before the Cardinal mounted a run midway through the set to take three of five points and cut into the lead at 11-7. Stanford clawed to within two points at 15-13 with a 15-11 lead dissipating for the Wildcats on three-successive points as a UK attack went out of bounds. Back-to-back Cardinal aces reset the fourth set with a 15-15 score before Goetzinger scored a critical point on the slide to put UK back in front, 16-15. The Cardinal went on to take the lead at 19-16 by winning nine of 10 points and Kentucky burned its final timeout, trailing by three. Stanford closed out the fourth set to force a fifth, 25-20.

Set Five
Set five began with a kill by Tealer to give UK momentum in the early parts on a thunderous termination. The opening points were tense and tight with kills by Tealer and Goetzinger keeping UK ahead. Madi Skinner had the first of her six fifth-set kills to put Kentucky on a 3-0 run and Stanford called its first timeout when UK tied up the set at 6-6. A service error by three-consecutive servers ended when Eleanor Beavin put an ace to the floor as Kentucky went up 9-8 to reinstate the UK lead for the duration of the match. Alli Stumler rattled home a kill to make it 12-9 and Stanford called its final timeout of the set trailing by three. Skinner flushed it down from the back row for Stumler to serve at 13-10 and the Wildcats then won an incredible rally for Stumler to serve match point at 14-10. A kill from Skinner, her third in a row, ended the match with UK taking the deciding set, 15-10. 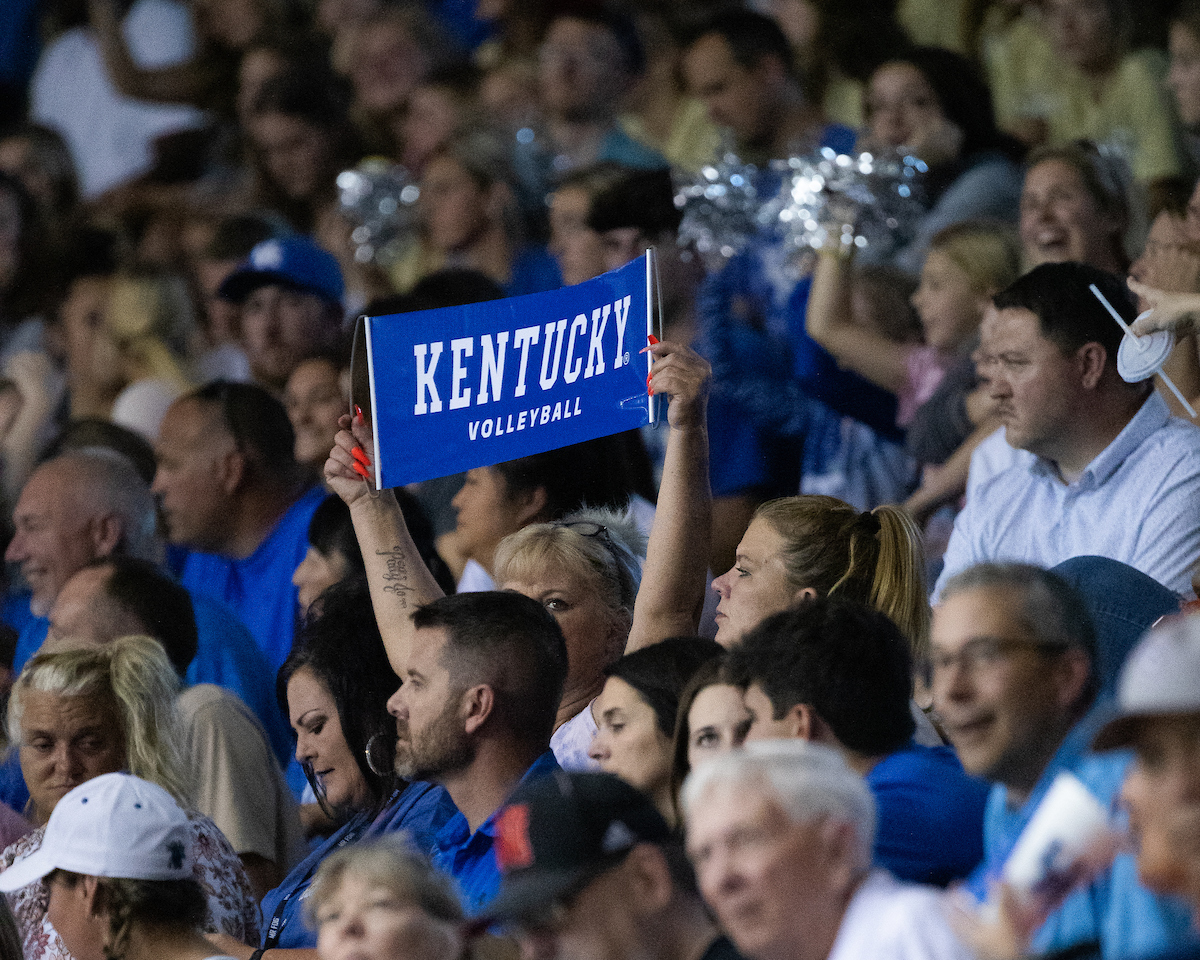 Kentucky vs. LSU on Saturday Moved Up to 2 p.m. ET 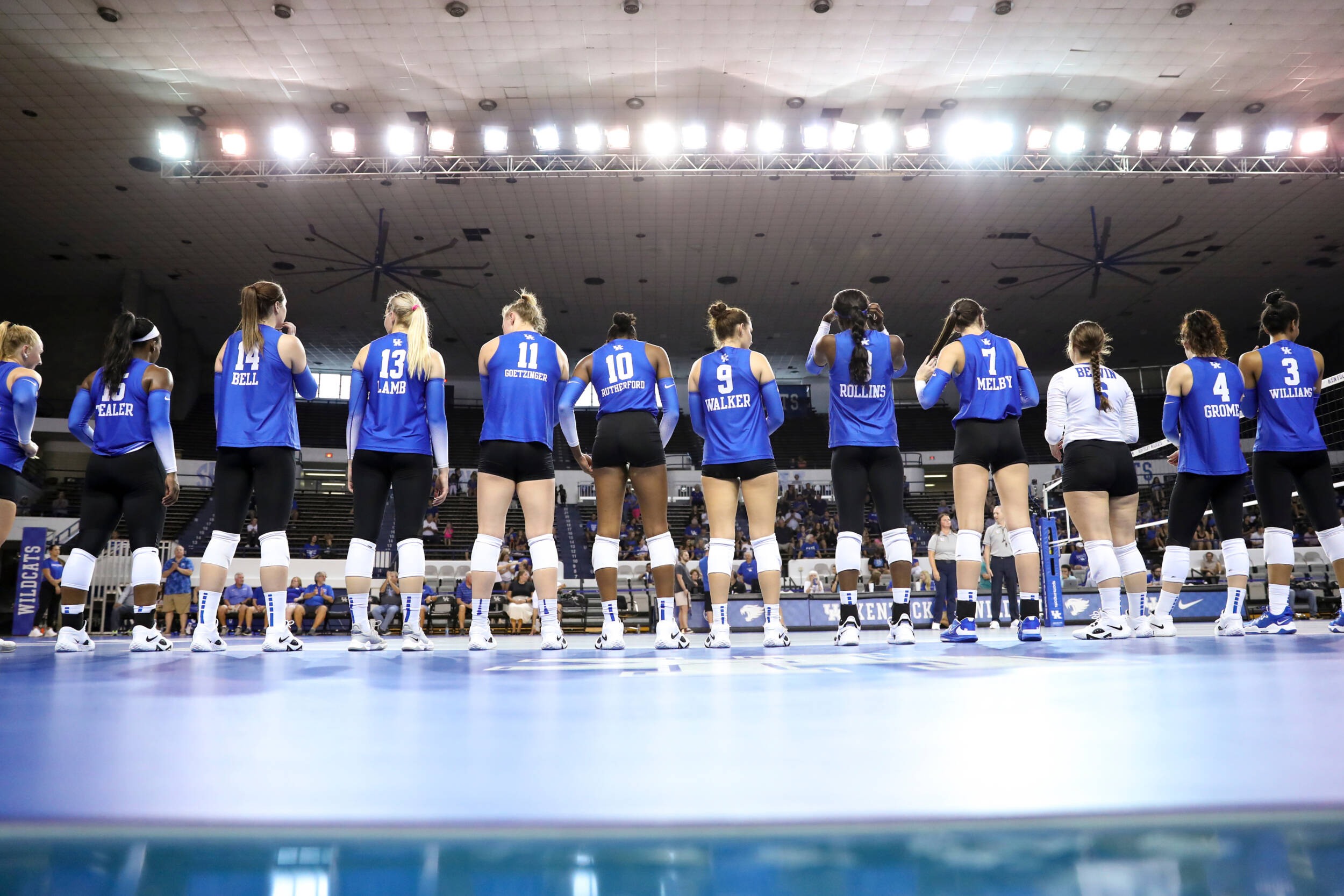 No. 2 Nebraska Sweeps No. 13 Kentucky
Skip To Main Content