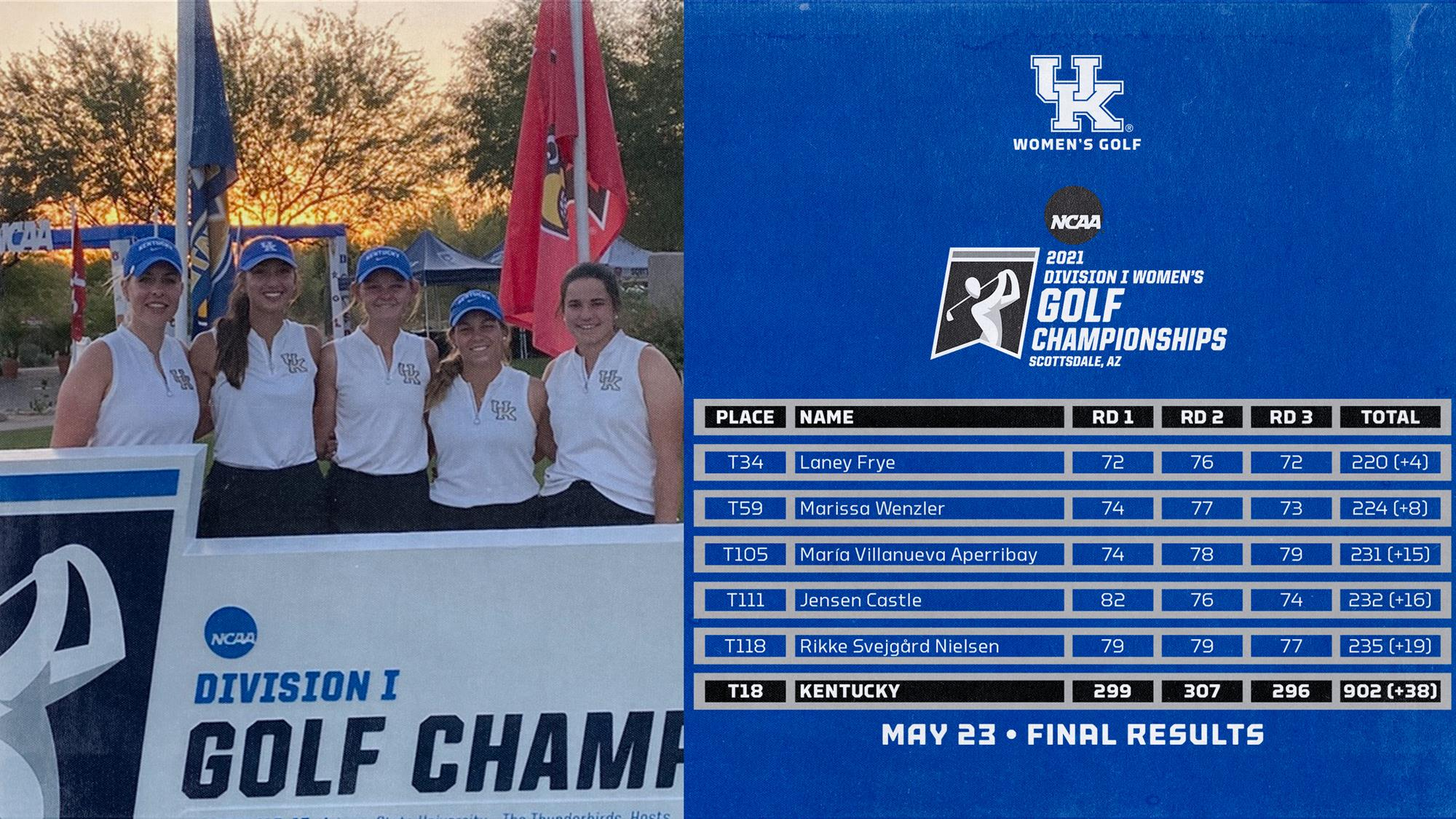 SCOTTSDALE, Ariz. – After a breakthrough year that resulted in the program’s first NCAA Championship finals berth since 1992, the Kentucky women’s golf team saw its season come to an end Sunday, tying for 18th place at the national championship.

The top 15 teams and top nine individuals on a non-advancing team moved on to Monday’s final round of stroke play where an individual champion will be crowned and the top eight teams will advance to match play.

UK, which made a habit out of coming from behind this spring, made another valiant rally again on Sunday in the third round at Grayhawk Golf Club (par 72, 6,337 yards) in Scottsdale, Arizona. However, the Wildcats could not finish off a strong opening nine and finished in at 38-over par, three spots and seven strokes behind the cut.

Freshman Laney Frye also just barely missed out on one of the nine individual spots that advanced. Down two strokes with three holes to go, she birdied No. 7, made a great par save out of the bunker on No. 8, and made a 15-footer for birdie on No. 9 to force a three-person playoff for two spots.

In a sudden-death playoff on the par-5 18th, Frye striped her drive down the right side of the fairway. She went for the green in two to try to lock up one of the two spots but hit her 5-iron short and right, bouncing off the frontside of the green and back into the water hazard. Frye had a putt from 15 feet to save par and force another hole but missed it right. 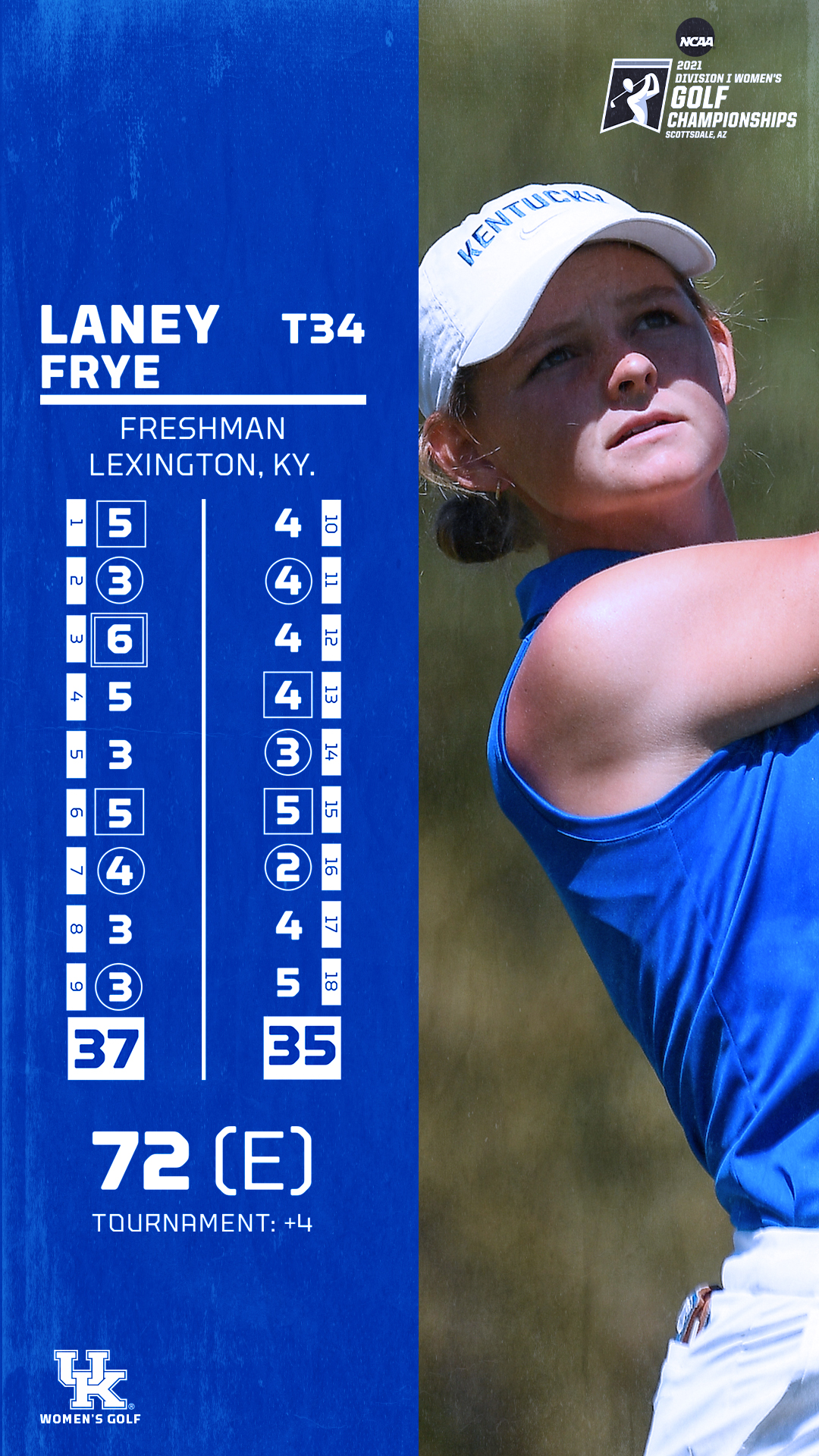 “I’m very proud truly of how strong they came out today,” UK head coach Golda Borst said. “We dug ourselves a pretty deep hole yesterday and it was going to take a lot to dig out of that. We were on our way. I was very happy to see their fight today. With a young team, sometimes you’re not quite sure what’s going to show up, but I’m proud.”

The season concludes with the Wildcats having raised the program’s expectations and having built a foundation for future success. The last two seasons feature the best (last season) and third-best (this season) scoring averages in school history, the first NCAA Championship finals appearance since 1992 this season, and two team championships last season.

The group that has largely raised the bar over the last two seasons is expected to return in full for 2021-22. Jensen Castle – who set the school’s single-season stroke average last year – Marissa Wenzler and María Villanueva Aperribay will all be back as juniors. Frye, in leading UK in scoring average this season and making the 2021 Southeastern Conference All-Freshman Team, is just getting started at Kentucky. And senior Rikke Svejgård Nielsen, the team captain and owner of 10 top-20 career finishes, is expected to use the NCAA’s extra year of COVID eligibility.

In other words, these Wildcats do not expect to wait another 29 years to return to the NCAA Championship finals. This very same group hopes to be back next year in Scottsdale where the Grayhawk Golf Club will host the national championship again.

“It’s a huge first step for this team to have this experience,” Borst said. “They’re all very upset and very disappointed right now and it hurts. I think it hurts for all of us. Everybody woke up this morning and wanted to fight hard for us to play tomorrow and have another day here on this golf course, but it wasn’t meant to be. We’ve learned so, so much. It’s exciting to know that these five are coming back and we have another strong player (Marta López Echevarría) joining us next fall that I think will really help. We’re just going to build on this. This was a strong wall to punch through.”

Kentucky entered the all-important third round six shots and six spots back. With the final tee time of the day, several teams came back to UK when its round started, and the Wildcats capitalized early.

Frye and Wenzler each made birdies at No. 11 – Kentucky’s second hole of the day – while Castle held steady with five straight pars. Frye added birdies at 14 and 16 to get to 1-under par and Castle birdied 16 and 18 to put UK in the hunt.

As Kentucky made the turn, the Wildcats had moved all the way up into a tie for 15th place with a handful of teams within a couple of shots.

But the back nine – UK’s bugaboo all week – reared its ugly head again. All five Wildcats made bogey or worse on No. 1, putting the Wildcats behind the cut line. Kentucky tried to answer with birdies from Frye on No. 2 and one by Castle on No. 3, but at that point UCLA, which finished in 15th place at 31-over par, was just about done for the day and a few shots ahead.

The Wildcats could not make up the deficit down the stretch and posted a third-round score of 296. The 8-over-par score was not only their best 18-hole round of the weekend, it is the best in UK’s six appearances in the NCAA Championship finals. Kentucky’s 54-hole total this weekend was also its best in its national championship history.

“I was very proud for how they started,” Borst said. “I felt like we could build some momentum. The birdies kept coming, which was great. I knew one was tough. One, I think, has played the toughest, so making the turn I was curious to see how we would handle two, three, four and five. We needed some putts to drop on four to kind of get that momentum back and we didn’t. They played hard today. They really, really did, and that’s all I ask for is for us to stick with our process.”

With two rounds of even-par this weekend, including Sunday’s 72, Frye ended her freshman campaign with 13 rounds of par or better this season, the second most in program history and only one behind Leonie Bettel’s single-season record of 14 set in 2018-19.

Frye, of course, would trade that mark to be playing Monday, which she nearly forced herself into with six birdies in the third round. It appeared Frye was out of the picture after a double-bogey on No. 3 and a bogey on No. 6, but she impressively went 2-under par over the final three holes to force the playoff.

Borst said Frye, who finished at 4-over par overall and tied for 34th, didn’t know where she stood as she made the clutch 15-foot putt on No. 9 to create the three-way logjam.

“I’m immensely proud for her,” Borst said. “This was one is going to hurt for a little bit, but when she sits back and thinks about it, she’s going to be proud of herself.”

Wenzler continued her strong play Sunday with four birdies for a 1-over-par 73. The sophomore enjoyed a solid week overall with an 8-over-par 224. It was her best 54-hole score since the final tournament of the fall and her second-best 54-hole total of the 2020-21 season.

Villanueva Aperribay entered this week with four rounds of par or better over her last six opportunities, but she could not find one this week on the Raptor Course at Grayhawk Golf Club. With a 79 in the third round, she finished at 15-over par, tied for 105th.

Castle played her best golf of the weekend in the final round and gave the Wildcats key jolts in their comeback attempt. She finished with three birdies Sunday and carded a final-round 74 to tie for 111st at 16-over par. Castle will now get ready for the 2021 U.S. Women’s Open, which she qualified for earlier this month.

Svejgård Nielsen, despite her hot play entering the NCAA finals (she tied for fifth last week at the NCAA Columbus Regional) could never get on track this week. With a 77 in the final round, the 2021 SEC Scholar-Athlete of the Year finished at 19-over par, tied for 118th. It ended a streak of four straight tournaments with a 54-hole season low.

The program’s best national finish remains fifth place at its inaugural NCAA Championship finals appearance in 1986. The Wildcats competed in the national championship five times in a seven-season span from 1986 to 1992 under longtime head coach Bettie Lou Evans but had not been back since.

Borst is hopeful this will be the start of a similar run.

“I’m excited to build on this and really sit down and look at what we learned and see what we can build on for next year and keep going,” Borst said.