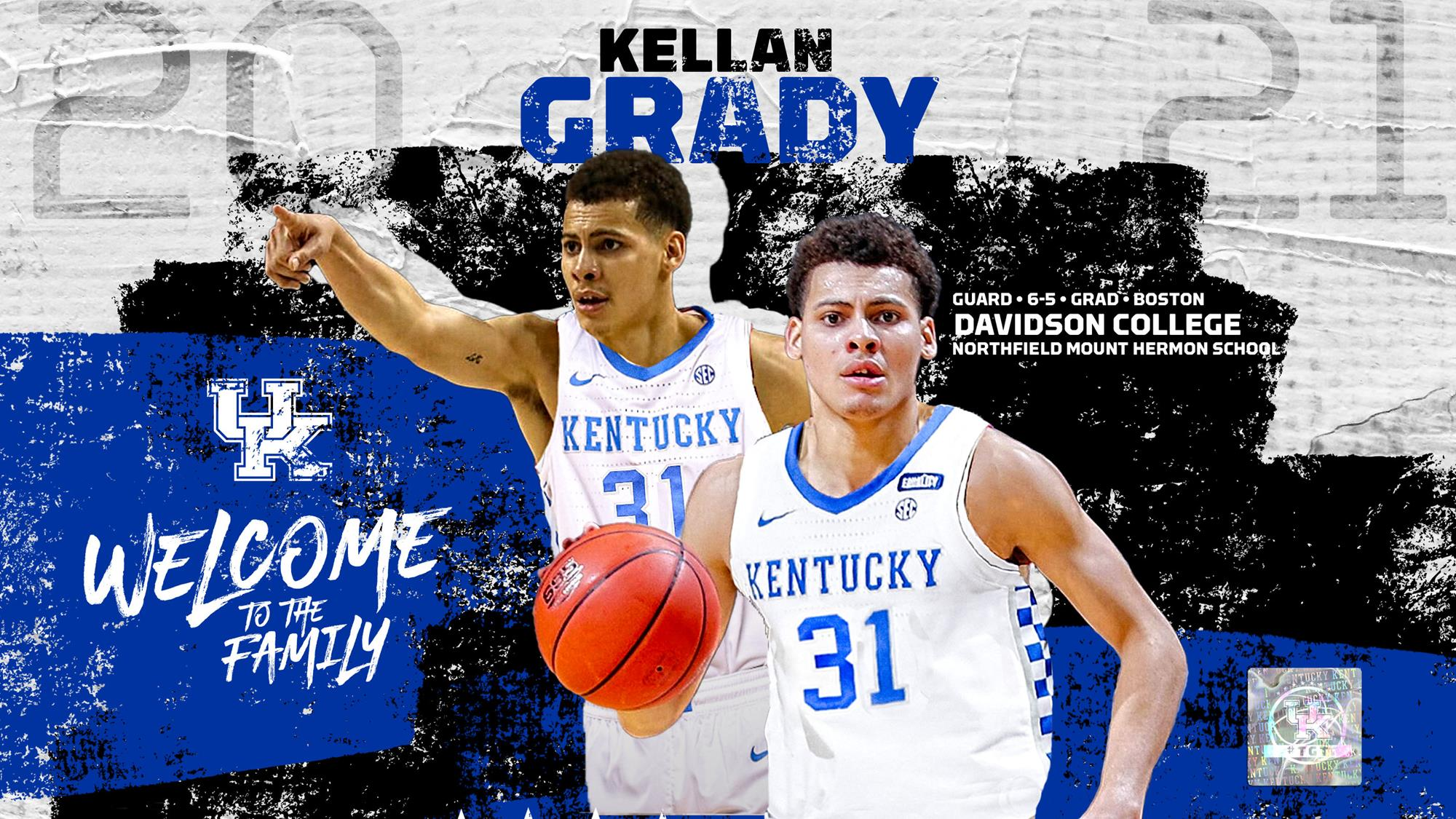 LEXINGTON, Ky. – The Kentucky men’s basketball team has added a high-scoring, experienced playmaker to its roster for the 2021-22 season with the addition of Kellan Grady, a graduate transfer from Davidson.

Grady, a 6-foot-5 guard, will join UK after scoring more than 2,000 points in four seasons at Davidson. He averaged at least 17.1 points per game in all four years.

Under NCAA graduate transfer rules, Grady will be eligible to play for the Wildcats in the fall after graduating from Davidson with an undergraduate degree in sociology. He is expected to graduate in May.

“First, I want to express my eternal gratitude for Davidson College, Coach McKillop and his entire staff for giving me the opportunity to represent Davidson for the last four years,” Grady said. “It has truly been an incredible experience and has made me a better player — and more importantly, a better person.

“With that said, I’m very excited to be a Wildcat again and play for Coach Calipari at the University of Kentucky. It is a tremendous opportunity to compete at the highest level and pursue my dreams. I’m grateful for the opportunity and eager to get to work.”

Grady will be Kentucky’s fourth graduate transfer over the last four seasons. UK added Reid Travis from Stanford for the 2018-19 season, Nate Sestina from Bucknell for 2019-20 and Davion Mintz from Creighton last season. Travis helped anchor a frontcourt that went to the 2019 Elite Eight, Sestina provided valuable depth and timely shooting for the 2020 Southeastern Conference champions, and Mintz was Kentucky’s leading scorer and 3-point shooter in 2020-21.

“Kellan has established himself as one of the best players in the country,” UK head coach John Calipari said. “His size, his skills, his scoring ability and his playmaking ability speak volumes to the player that he is. Kellan played in a great program under a terrific coach, Bob McKillop. He is a four-year starter whose toughness and fight will add to our team. His game-to-game consistency – his scoring, his ability to share the ball and his defense – is part of what makes him special, and we are ecstatic to have him join a team that was close last season but needed what he gives us to get over to the top.”

Grady was a prolific scorer at Davidson who scored 2,002 career points on 47.2% career shooting. With 240 career 3-pointers, Grady has made at least 51 treys in all four seasons and shot a career-best 38.2% from behind the arc in 2020-21. He has 21 games with at least four 3-pointers. Grady reached the 2,000-point milestone in Davidson’s final game of 2020-21 and was the sixth player in program history to achieve the mark.

The Boston native has been one of the Atlantic 10’s best players from the very start of his college career. Grady is a four-time All-A-10 selection, including a two-time first-team pick. He won A-10 Player of the Week five times in his Davidson career in addition to five A-10 Rookie of the Week honors in his breakthrough 2017-18 campaign. Grady was named in A-10 Rookie of the Year that season.

The scoring consistency of Grady will be a welcomed addition to UK, which posted its lowest scoring average and field-goal percentage in the 12-season Calipari era. Grady has scored in double figures 96 times in his career, 20 or more points 44 times and 30 or more six times. His career high is 39 points, set his freshman season.

Davidson posted a winning record in all four seasons with Grady on the roster, including an NCAA Tournament appearance in 2018 that coincidentally pitted him vs. Kentucky in the first round. Grady scored 16 points in the 78-73 loss to UK.

Grady was a top-70 prospect (Rivals and 247Sports) out of high school. He was an all-state selection out of Northfield Mount Hermon School.

Kentucky’s 2021-22 roster is currently taking shape. At this point, freshman guards Brandon Boston Jr. and Terrene Clarke have announced their intentions to declare for the NBA Draft and pursue a professional career. Freshman forward Isaiah Jackson is also entering his name in the draft but has indicated he is open to returning after going through the draft evaluation process.