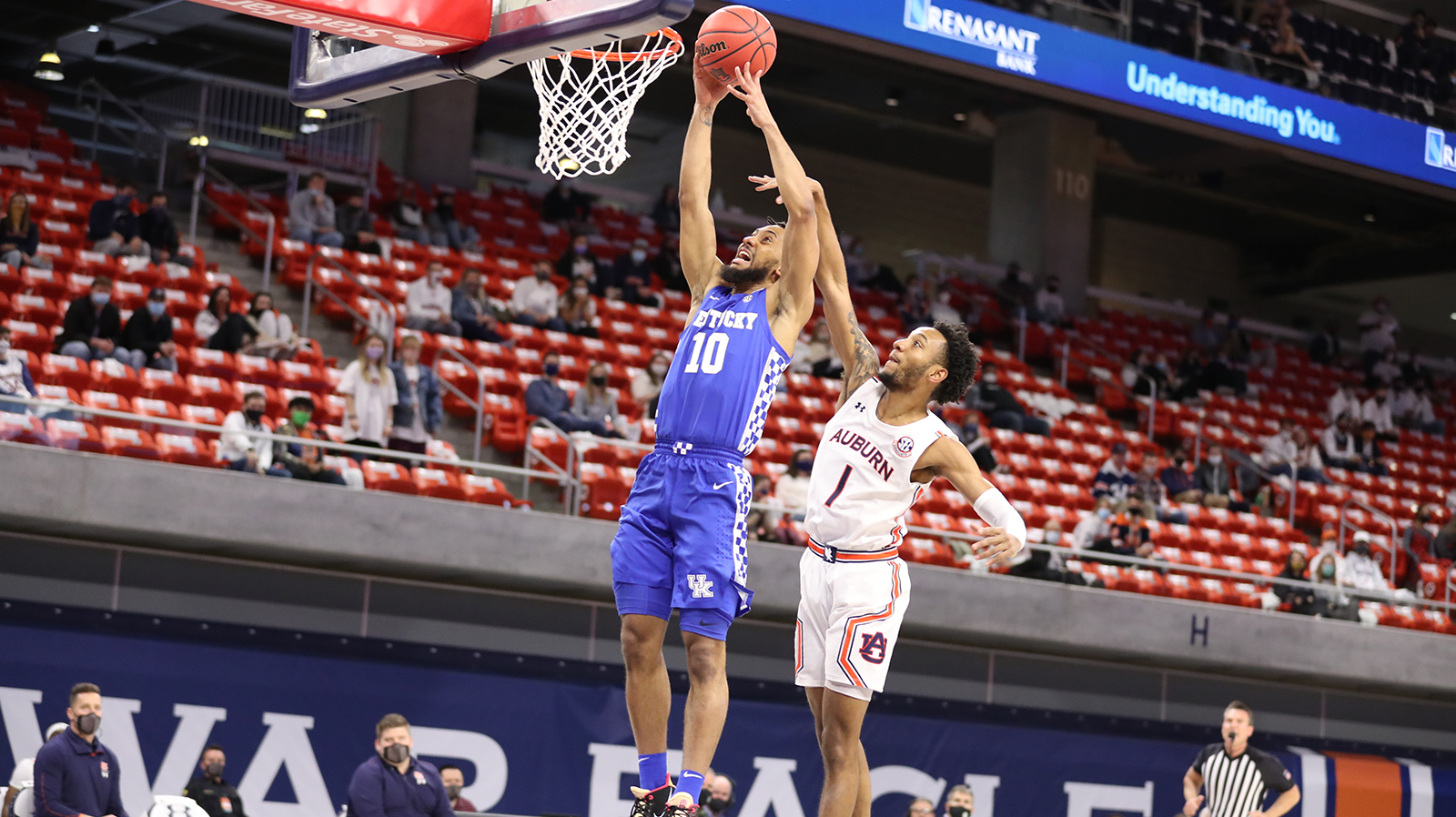 AUBURN, Ala. – Allen Flannigan scored 21 points and he and JT Thor each sank a pair of clutch free throws in the last 18 seconds to preserve Auburn’s 66-59 come-from-behind win over Kentucky on Saturday at Auburn Arena.

The Wildcats turned the ball over 18 times, 12 of those coming after halftime when Auburn finally found its groove after woeful early shooting, and rallied into the lead for the final 10 minutes.

Flannigan scored 16 after halftime, Devan Cambridge scored five of his 13 points during a 9-0 run by the Tigers (8-6, 2-4 Southeastern Conference) midway through the final period when they wrested momentum away from Kentucky (4-8, 3-2 SEC).

“We missed wide-open shots and we had our chances,” UK head coach John Calipari said. “I’m disappointed. We came out of a couple of timeouts and didn’t do what we were trying to do. We let one slip away on the road. We should have been up big at the half and I can’t believe we weren’t.”

Freshman Sharife Cooper, finally cleared to play by the NCAA a week ago, scored eight of his 11 points after halftime and made eight assists.

Flannigan started the pivotal 9-0 run with a defensive rebound leading to his bucket that tied the game at 43. Kentucky lost its next possession on an offensive foul and Cambridge knocked down a 3-pointer for a 46-43 lead at 10:07 and Auburn never trailed again.

All nine Wildcats scored with Davion Mintz leading with 11 points, Jacob Toppin added 10 but only two in the second half. Toppin and Dontaie Allen led Kentucky to a 25-21 halftime lead. Allen was held scoreless after intermission, finishing with eight points.

“At the end of the day, we were running plays for Dontaie and he wouldn’t shoot the ball,” Calipari said. “That’s why I took him out the first time. One time we ran two things for him with shots and he wouldn’t take them. Dontaie wasn’t the issue.”

Each team was cold early, Kentucky leading 9-2 despite 4-for-16 shooting only because Auburn was 1 of 16. The Tigers missed their first eight shots from behind the 3-point arc and UK held Cooper without a field goal on eight attempts.

Auburn stayed close and trailed just 25-21 at the halftime because the Wildcats weren’t much better offensively.

“We aren’t good enough to go run by people,” Calipari said. “If we create space and assists, we should be averaging at least 18 assists on our baskets, maybe more. Everyone was trying to score instead of creating shots for each other. We are one of those teams that are trying to figure it out. You can’t just ride one or two guys.”

Auburn grabbed 12 offensive rebounds in the first half and outrebounded the bigger, longer Wildcats.

“We did play with effort but not enough toughness … which is unacceptable for any team,” Toppin said. “We need to find a way to get tougher and play with more grit.”

Auburn led by as many as 10 points with 5:36 to play. A late rally got Kentucky as close as two twice, including with 58 seconds left on a Toppin dunk, but UK couldn’t get the stops it needed.

Since the beginning of the 2015-16 season, Auburn is 5-4 against the Wildcats. That is the second-most wins by any SEC team against Kentucky in that span and the first time Auburn has beaten Kentucky in four consecutive seasons since 1987-90.

“I think you’re judged by how you do against the best teams on your schedule, and certainly Kentucky is going to always be as good as anybody on our schedule,” Auburn head coach Bruce Pearl said. “Beating Alabama is important, beating Georgia is important. So it matters. We want to make history. I think before I got here, they had lost 17 in a row or something like that. I’m not even sure.  But look, you’ve got to take advantage of your opportunity.”