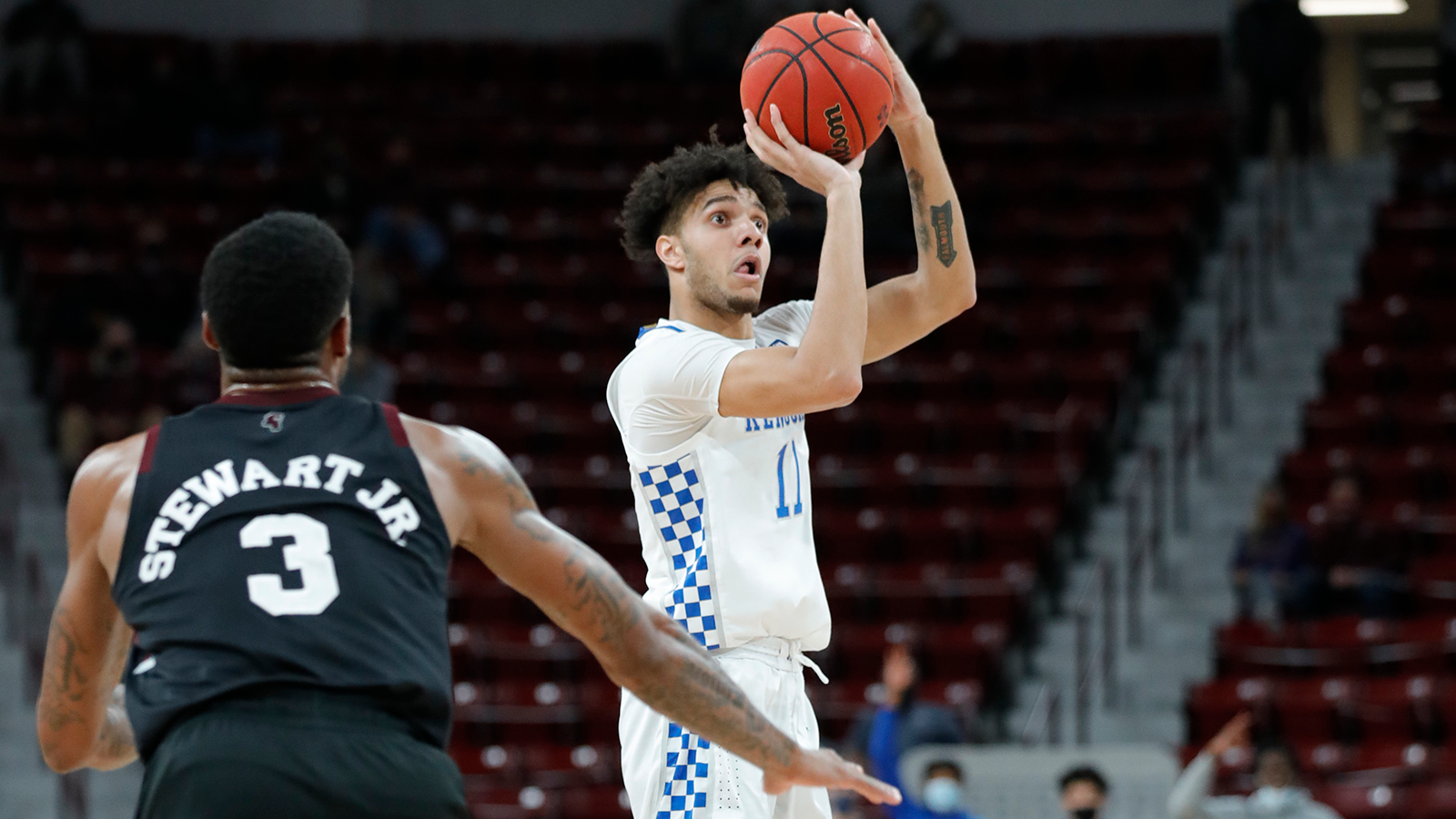 STARKVILLE, Miss. — Like so many Kentucky boys and girls growing up in the state of Kentucky, Dontaie Allen dreamed of a chance to play Kentucky basketball.

On Saturday in what felt like a must-win game for the Kentucky men’s basketball team, Allen not only got his opportunity, he performed beyond his wildest dreams.

“It feels crazy,” the Falmouth, Kentucky, native said. “If there are kids listening, it comes down to work. If you put in the work, you can do some great things. Just put in the work, put your mind, body and soul into it.”

Allen’s game came after weeks of Big Blue Nation pleading for Allen to get a bigger opportunity. After redshirting last season coming off a knee injury, Allen had played just 20 minutes to start his career and logged only one minute over the last three games, including two games without ever checking in.

With freshman guard Terrence Clarke sidelined with a right ankle injury and the Wildcats (2-6, 1-0 Southeastern Conference) in desperate need of an offensive punch, Allen not only got his chance, he played 32 minutes and hit nearly every big shot to fuel the comeback and ultimately close out the Bulldogs (6-4, 1-1 SEC) at Humphrey Coliseum in Starkville, Mississippi.

“That’s what you’re supposed to do when you get a chance,” said UK head coach John Calipari, who was ejected midway through the second half that seemed to spark the comeback. “I’m so happy for him. I said before the game, to the staff, ‘I hope he goes big because we need to win.’ We needed a win.”

And win Kentucky did for the first time since its season opener vs. Morehead State, all the way back on Nov. 25. The victory ended a six-game losing streak, tied for the second-longest in school history.

Given the season implications — Kentucky’s NCAA Tournament hopes in peril and the opportunity for a fresh start to begin league play — Allen’s performance was one Kentucky fans will remember for a long time. Moments after Calipari was sent to the locker room with back-to-back technical fouls, the homegrown kid from Pendleton County High School sparked a 10-0 run. Down 55-46 with nine minutes to play, Allen started the run with a 3-pointer and then gave the Wildcats their first lead of the second half with a 3-pointer to end the rally.

Just when it looked like Mississippi State might foil the comeback attempt with an Iverson Molinar 3-pointer to take a 59-56 lead with 2:32 left, Allen answered with an the equalizer from long range.

Olivier Sarr, who broke out of a two-game slump with the second double-double of his UK career (14 points and 12 rebounds), hit a game-tying layup with 44 seconds left. Sarr had a desperation look to win the game in regulation after an offensive rebound but came up short.

The two would make sure to end it in the extra periods.

After Allen nearly won it in overtime with another 3, Sarr provided the final go-ahead shot — one of his career-high two 3-pointers — from the top of the key with 4:15 left in double overtime to take a 71-68 lead. MSU cut it to one, but Allen provided the final nails in the coffin with an improbable leaner that banked in from 2 before his final 3 to put the Wildcats in front 76-70.

Calipari, who admitted to intentionally trying to draw the first technical foul, snuck into the corner of the locker room after the game to be able to watch his team celebrate the win and their teammate. Coaching in his 1,000th career game as a college head coach (only Adolph Rupp and Roy Williams have won more games in their first 1,000 games) he paced in the locker room and watched the nail-biting final minutes on his phone as the assistant coaching staff, led by Bruiser Flint, directed the comeback.

“He changes our team,” Calipari said of Allen.”The reason we couldn’t score, and you guys all know it, guys couldn’t make shots. It doesn’t matter what you run. It bleeds into free-throw shooting. So, him being able to that, I told the team after, he’s earned more minutes. Some guys are going to end up having to play less.”

Allen, who finished 7 of 11 from long range, admitted he briefly wondered when he might get his shot to play, but he said the outcry from fans never changed his approach or added any pressure to perform.

“I don’t think it was pressure only because I put in the work,” Allen said. “I didn’t know when my opportunity was going to come. Obviously, it could have come today, next week or next month. Nobody knows, so I was just keeping my head down and just working hard. I am thankful for the opportunity I had tonight.”

Allen and Sarr provided the biggest shots, but they had help in the comeback.

Devin Askew continued his resurgence with 11 points and a game-high seven assists, Isaiah Jackson blocked three shots and came up with three steals, and Lance Ware provided a career-high 35 minutes and pulled down a game-high 13 rebounds.

“These kids deserve something good to happen,” Calipari said, “and it did.”

Kentucky is 15-0 vs. the Bulldogs under Calipari, and Calipari is 16-0 in his career vs. Mississippi State.