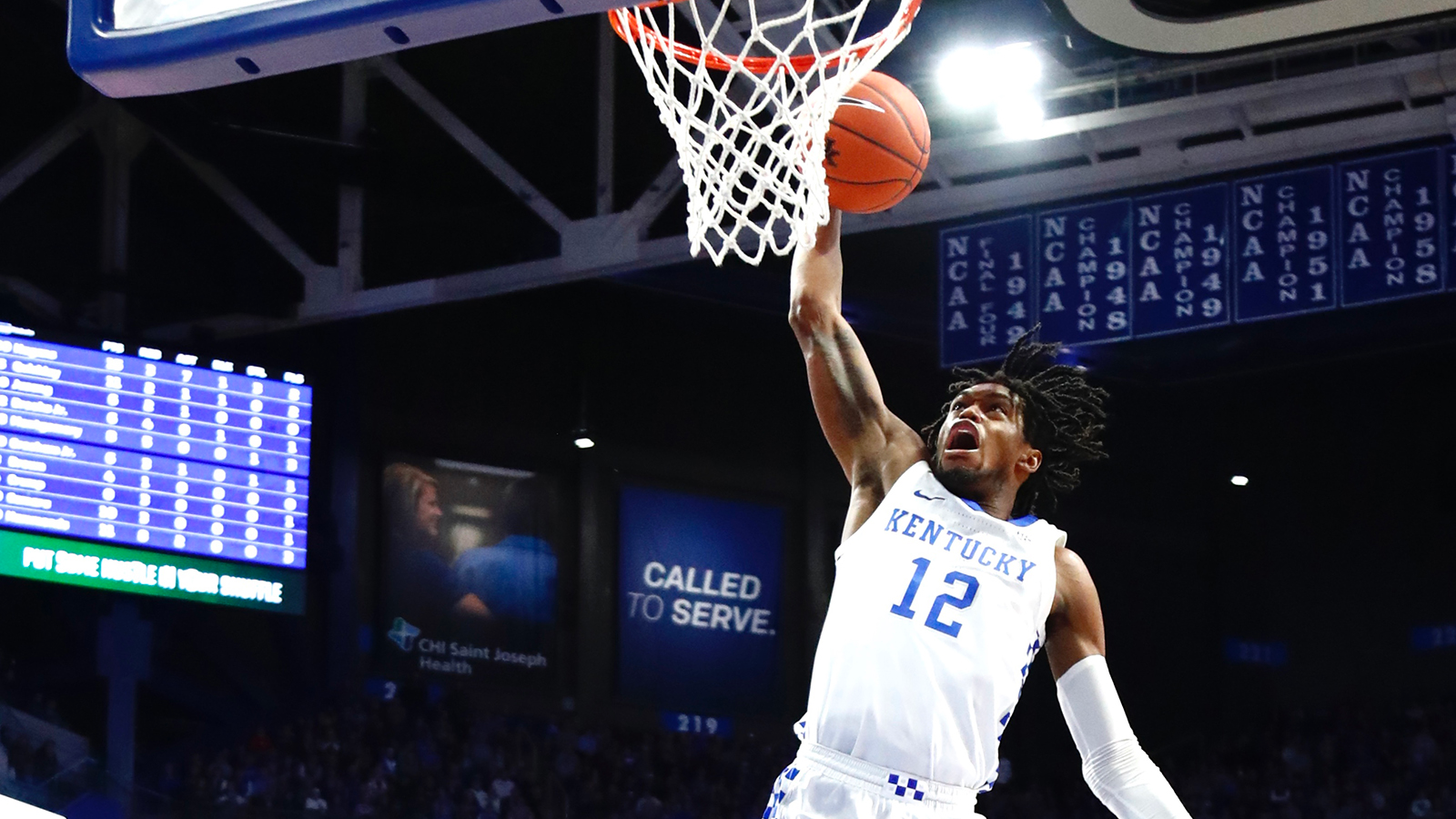 LEXINGTON, Ky. – The 2020-21 Kentucky men’s basketball schedule is beginning to take shape with the initial release of six nonconference games.

The games vs. Kansas, Georgia Tech and Michigan were previously announced as a part of neutral-site events. The fourth neutral-site game, the CBS Sports Classic, has been confirmed to be against UCLA.

The first of the four, tipping off the college basketball season for a third year in a row, will be the Champions Classic. UK will take on Kansas in the event for a fourth time, having defeated the Jayhawks in the Champions Classic in two of the previous three matchups.

The Wildcats own a 5-4 record in the Champions Classic after defeating Michigan State in Madison Square Garden in New York in 2019. This season’s game will take place in the United Center in Chicago, where UK is 7-3 all-time.

Kentucky last played Kansas in January 2019, a 71-63 win at Rupp Arena at Central Bank Center in the annual SEC/Big 12 Challenge. The Jayhawks finished the 2019-20 season ranked No. 1 in both the Associated Press Top 25 and the USA Today Coaches Poll.

In the future matchups of the Champions Classic, the Wildcats will play Duke on Nov. 9, 2021 back in Madison Square Garden and Michigan State on Nov. 8, 2022 at Bankers Life Fieldhouse in Indianapolis.

UK will host Georgia State on Nov. 20 in one of two confirmed nonconference home games so far. Georgia State went 19-13 last season. The Wildcats own a 2-0 advantage in the series.

The Wildcats will travel to Atlanta to complete a two-game series with Georgia Tech on Nov. 27. After defeating the Yellow Jackets 67-53 last season in Rupp Arena, Kentucky will play Georgia Tech at State Farm Arena in Atlanta as a part of the Holiday Hoopsgiving.

UK is 57-15 all-time vs. its former Southeastern Conference foe.

Cleveland State, a familiar opponent in the John Calipari era, will visit Rupp Arena on Nov. 30. UK has played CSU three times – all wins – in school history, all during Calipari’s 11-year tenure. The last matchup with the Vikings was in November 2016, a 101-70 Kentucky rout.

Kentucky will play Michigan on Dec. 4, 2021 in Ann Arbor, Michigan, and the Wolverines will make the return trip on Dec. 3, 2022. The last time the two schools were pitted vs. one another resulted in a classic. UK sunk the Wolverines 75-72 in Indianapolis thanks to a late Aaron Harrison 3-pointer to punch a ticket to the Final Four.

Tickets for this season’s “Battle of the Blue” are on sale through AXS.com and The O2 Arena.

Kentucky will participate in the CBS Sports Classic for a seventh consecutive season when it faces UCLA on Dec. 19. A venue for the game has not been announced yet.

In a matchup of the NCAA’s leading national title holders, the two schools are 1-1 in the CBS Sports Classic. UK is 3-3 in the event and 8-7 all-time vs. the Bruins.

In the future matchups of the CBS Sports Classic, UK will match up with North Carolina on Dec. 18, 2021 and Ohio State on Dec. 17, 2022. Both locations are to be determined.

Other nonconference matchups for this upcoming season will include the annual rivalry game vs. Louisville and the annual SEC/Big 12 Challenge. A date has not been finalized for the former and an opponent has not been determined for the latter.

The nonconference schedule will give way to the typically difficult SEC slate. The league schedule has not been announced yet, but UK will play its permanent home-and-away opponents of Florida, Tennessee and Vanderbilt twice, plus host and visit both two other opponents. The Wildcats will face the remaining eight SEC opponents once.

The league has earned 15 berths in the last two NCAA Tournaments, the conference’s best two-year stretch. The SEC was slated for another impressive haul last season until the COVID-19 pandemic canceled the postseason.

Additional opponents, dates and times will be announced at a later date.

Kentucky will take on that difficult schedule with what will be one of the most inexperienced rosters of the Calipari era. UK will be tasked with replacing 94% of its scoring from last season – most of the Calipari era – 92.4% of its minutes, 84.4% of its rebounds, 92.0% of its assists and 91.5% of its blocks.

Calipari and his staff have prepared for the losses – which include five underclassmen declaring for the NBA Draft – with the nation’s No. 1 recruiting class and two key transfers.

Mintz, after graduating in May from Creighton, will be eligible this season and is expected to provide valuable depth and experience at the guard position. Toppin, as an incoming sophomore, will have three years of eligibility starting in the 2021-22 season. Toppin will be permitted to practice and train with the team this season, but the 6-foot-8 forward will not be able to play in games under current NCAA transfer rules.

Basketball will be back. We’re preparing for it. The first six dates we’ve locked in for the 2020-21 season. #TGT #BBN