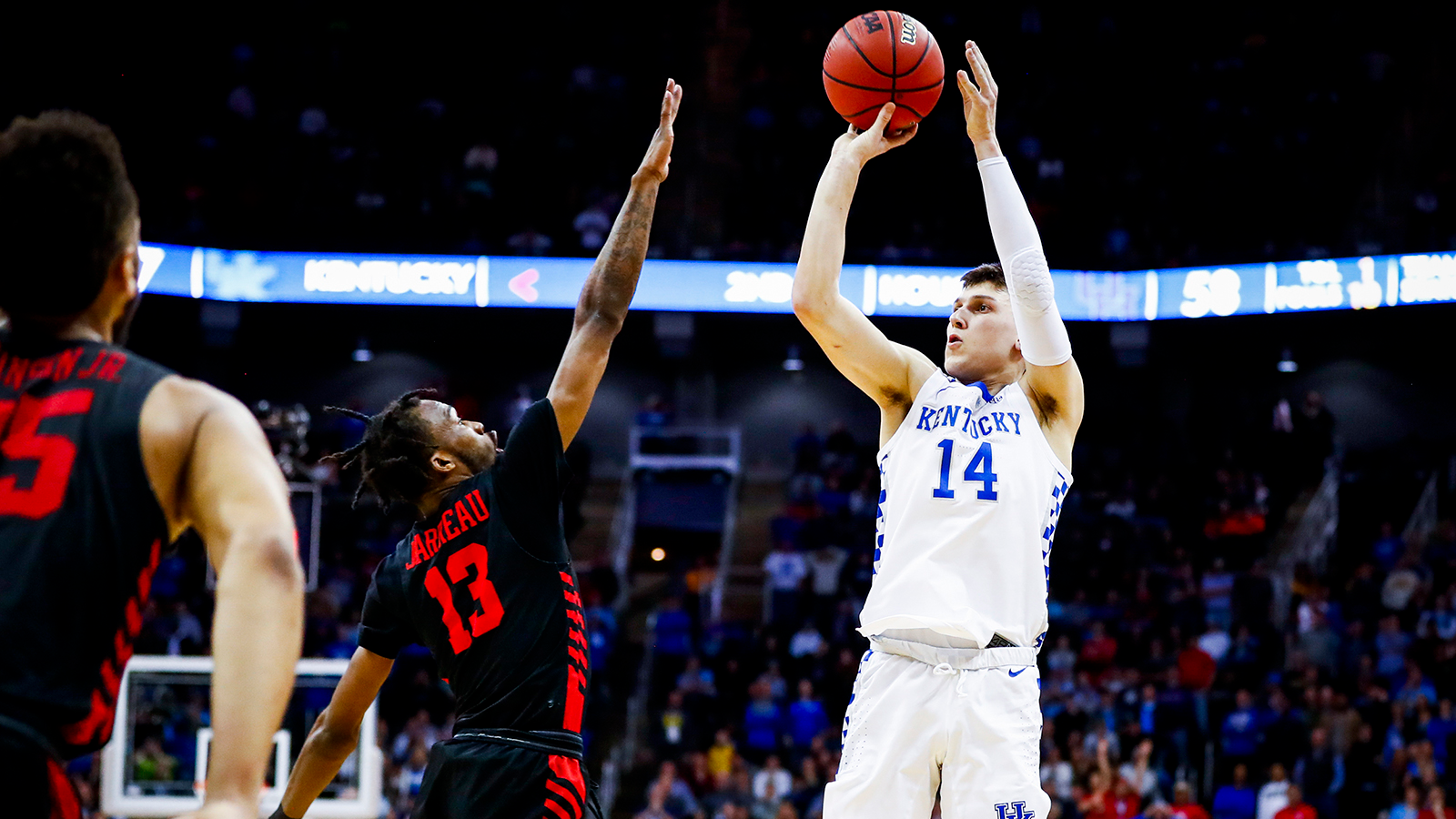 KANSAS CITY, Mo. – Kentucky got its big man back, and PJ Washington helped get the Wildcats to the Elite Eight for the seventh time in 10 years – with big boost from Tyler Herro.

Herro hit a 3-pointer with 25.8 seconds left to give second-seeded Kentucky the lead after Houston had erased a double-digit deficit, and the Wildcats escaped their Midwest Regional semifinal with a 62-58 win Friday night.

There was a notion this Kentucky team might max out after two rounds of the NCAA Tournament if its star forward Washington didn’t come back from a foot injury. Playing through pain, Washington scored 16 points and had a crucial blocked shot late in the game.

”I love our will to win,” Kentucky coach John Calipari said. ”How we played down the stretch… We make our free throws, we defend. But Houston, they’re a terrific team. They were not going to go away. We had to go get balls and do some stuff to beat them, and it was a great win and I’m happy for our guys.”

Herro’s huge basket gave the Wildcats (30-6) a 60-58 lead and came after Houston’s Corey Davis Jr. had his driving shot swatted away by Washington.

Herro, who made two free throws with 13 seconds to wrap up his 19-point night, also played a superb game defensively. His assignment was to guard Davis, who averaged 23.5 points in the Cougars’ first two tournament games. Davis missed 5 of his first 6 shots and was not much of a factor until he helped fuel Houston’s comeback. He ended up with 14 points on 5-of-16 shooting.

Houston (33-4), in the Sweet 16 for the first time since 1984, used a 17-6 surge to finish a comeback from 13 points down early in the second half. Armoni Brooks, who finished with 20 points, made three of his six 3-pointers during the run, the last a fade-away from the corner to tie it at 49. Davis then muscled a shot over Reid Travis in the lane with 3:39 left for the Cougars’ first lead since 13 minutes left in the first half.

After Washington made two free throws to tie it, Brooks struck again, this time from the right side, to make it 54-51.

The Cougars couldn’t quite finish the job. Davis’ floater made it 58-55 before Washington scored over Fabian White Jr. to make it a one-point game. He missed the tying free throw, and then raced to the other end to block Davis’ shot and turn the momentum back to Kentucky.

”We certainly had our chances,” Houston coach Kelvin Sampson said. ”We had a lot of good looks throughout the game. When you get this far, it’s always tough. It’s always hard to accept losing a game.”

Washington, the power forward who’s a projected first-round NBA draft pick this year, was wearing a cast on his sprained left foot only three days ago and hadn’t played since March 16.

”I took some pain pills before the game. Kind of started hurting in the second half, but I have to tough through it,” Washington said. ”Through the end of the game, it was trying to cramp up.”

His status was a mystery right up until the first media timeout, when he entered to a standing ovation from fans behind the Kentucky bench.

Wildcats coach John Calipari had said Thursday that he would be ”stunned” if Washington played more than 15-18 minutes, if he played at all. He played 26, making 6 of 8 shots with a couple dunks and made that big block at the end.

”Make no question about it, their best player is (Washington),” Sampson said. ”He’s the only one that we didn’t have an answer for.”

Houston: The Cougars’ best season since the Phi Slama Jama teams comes to an end. Convincing wins over double-digit seeds Georgia State and Ohio State were one thing, but the Cougars were going to be hard-pressed to advance against a Kentucky team near full strength with Washington’s return. They almost did it.

Kentucky: The Wildcats look formidable now that Washington is back. Kentucky came out blazing against the nation’s top field-goal defense and then gutted out a ragged second half thanks to Herro’s big 3-pointer.