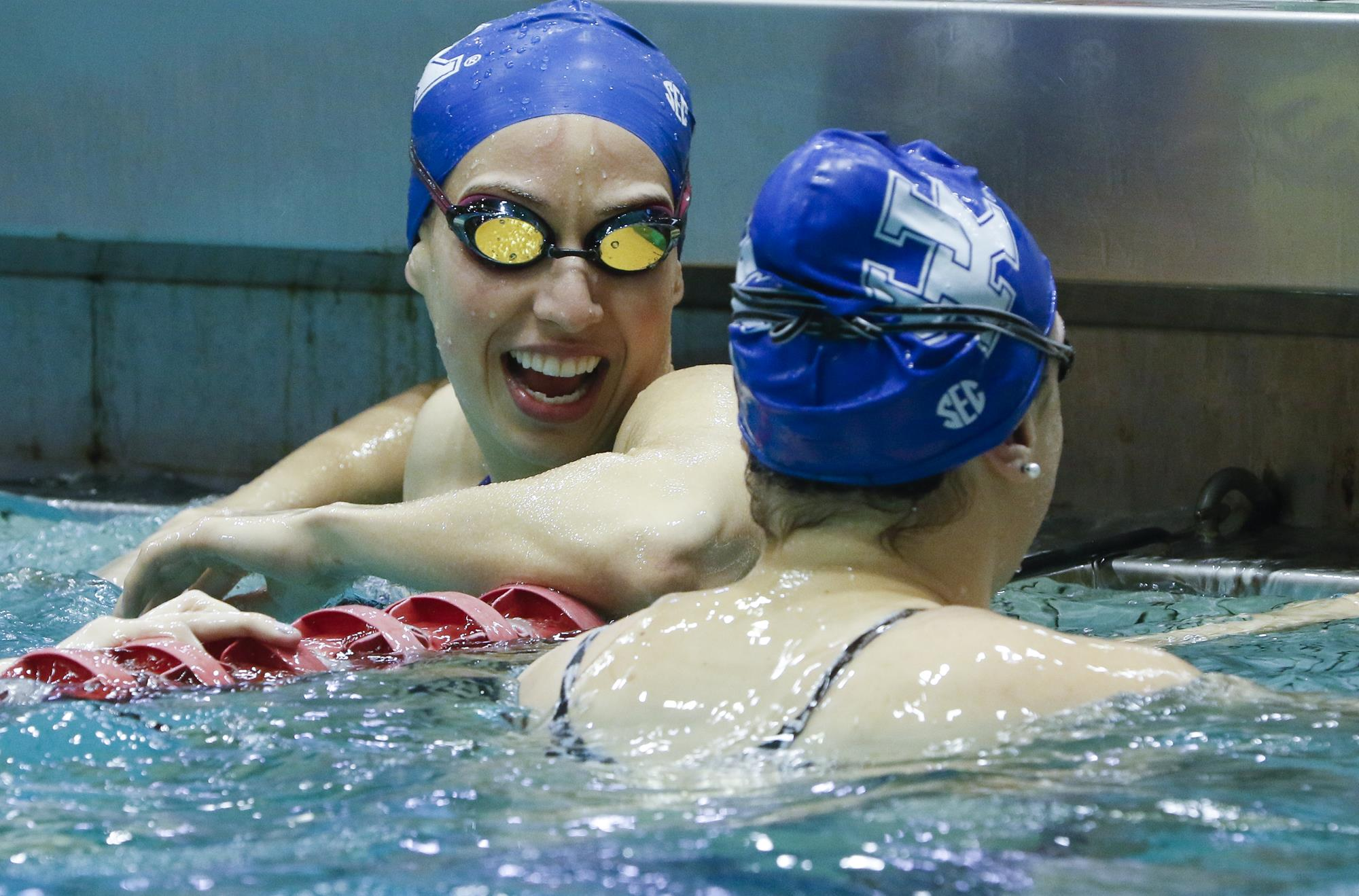 ATHENS, Ga. – The Kentucky swimming and diving program concluded the 2019 Southeastern Conference Championship with a historical night, each team breaking a school record in the final race of the meet.

For only the third time in school history and the second time in the past three years, the UK women finished third overall in the conference with 927.50 points. The men’s club finished seventh overall with 672 points, their best finish in seven years.

Both teams set records in the 400 freestyle relay, the final event of the conference meet. The women’s relay made up of junior Ali Galyer, junior Asia Seidt, freshman Riley Gaines and senior Geena Freriks swam a 3:14.68 to reset a school record that the foursome set in November 2018. The time also reached the NCAA “A” cut standard.

In his last conference championship of his career, senior Austin Haney set an individual school record in the 200 breaststroke with his preliminary swim. Haney reported a 1:55.69 to become the record holder in the event, surpassing George Greenhalgh who charted a 1:55.98 in 2016.

Haney, a native of Fort Mitchell, previously held the No. 3 spot on UK’s top-10 all-time performance list. With his record time, Haney earned the top seed in the “B” final placing ninth overall in the preliminary race.

Seniors Freriks and Paige Kelly had terrific swims in the 1650 freestyle. Kelly set a career best in the event, while it was Freriks’ first time swimming the mile competitively. Freriks finished sixth overall in the conference with a 16:05.96 to become the second fastest all-time at UK.

Kelly dropped over two seconds off her career low to report a 16:10.41. She will remain fourth all-time in Kentucky history.

Seidt, who up until today already collected three medals this week, recorded a 1:50.76 in the preliminary 200 backstroke to earn the top seed ahead of finals.

The UK women had all four of its Wildcats in the preliminary bout qualify for finals in the event. Senior Kayla Churman (1:55.34) reached the “B” final, while freshman Sophie Sorenson (1:53.05) and Galyer (1:52.97) joined Asia Seidt in the “A” final.

In the final race, Seidt led the entire way to win a gold medal by recording a 1:49.31. The time also earned an NCAA “A” cut. Seidt has won the event three straight years, each of her appearances at the conference meet.

Right behind her was Galyer. The junior touched the pad within 1:50.39 to earn a silver medal. The first- and second-place finishes in the event earned the UK women 60 points.

Galyer won bronze in the 200 backstroke in the 2018 conference meet. Galyer has already won two other medals this week, helping the 800 freestyle relay team and the 400 medley relay team to bronze finishes.

Freshman Sorenson rallied a sixth overall finish in the 200 backstroke with a mark of 1:52.92, a career low that she reset for the second time Saturday.

Sophomore and former SEC Female Freshman of the Year, Bailey Bonnett earned her second medal of the meet. She reported a 2:07.19 in the 200 breaststroke to earn a bronze finish. Bonnett is the school-record holder in the event with a 2:07.17. The Pennsylvania native helped the women’s 400 medley relay team earn a bronze medal earlier in the week.

They brought even more heat in the final races. Head won the “C” heat by posting a new career low with a 43.30. Mitchell won the “B” heat with a reset career best of 42.93. Wetzlar, a Zimbabwe native, matched his career best from the preliminary flight by reporting a 42.77 to earn eighth overall in the conference.

Sophomore diver and former SEC Male Freshman Diver of the Year, Chase Lane was the only Wildcat Saturday to earn a seed in the platform final. However, he did so with style when he took first overall in the preliminary division with a 405.85.

Once again, the Wildcat brought more heat to the final round when he earned a silver medal for his platform score of 424.65. It marks his first podium finish at the conference meet. His score also is his career best, which will make him the second best in the discipline in program history. He surpassed senior Seb Masterton who previously held the second spot in the record book.