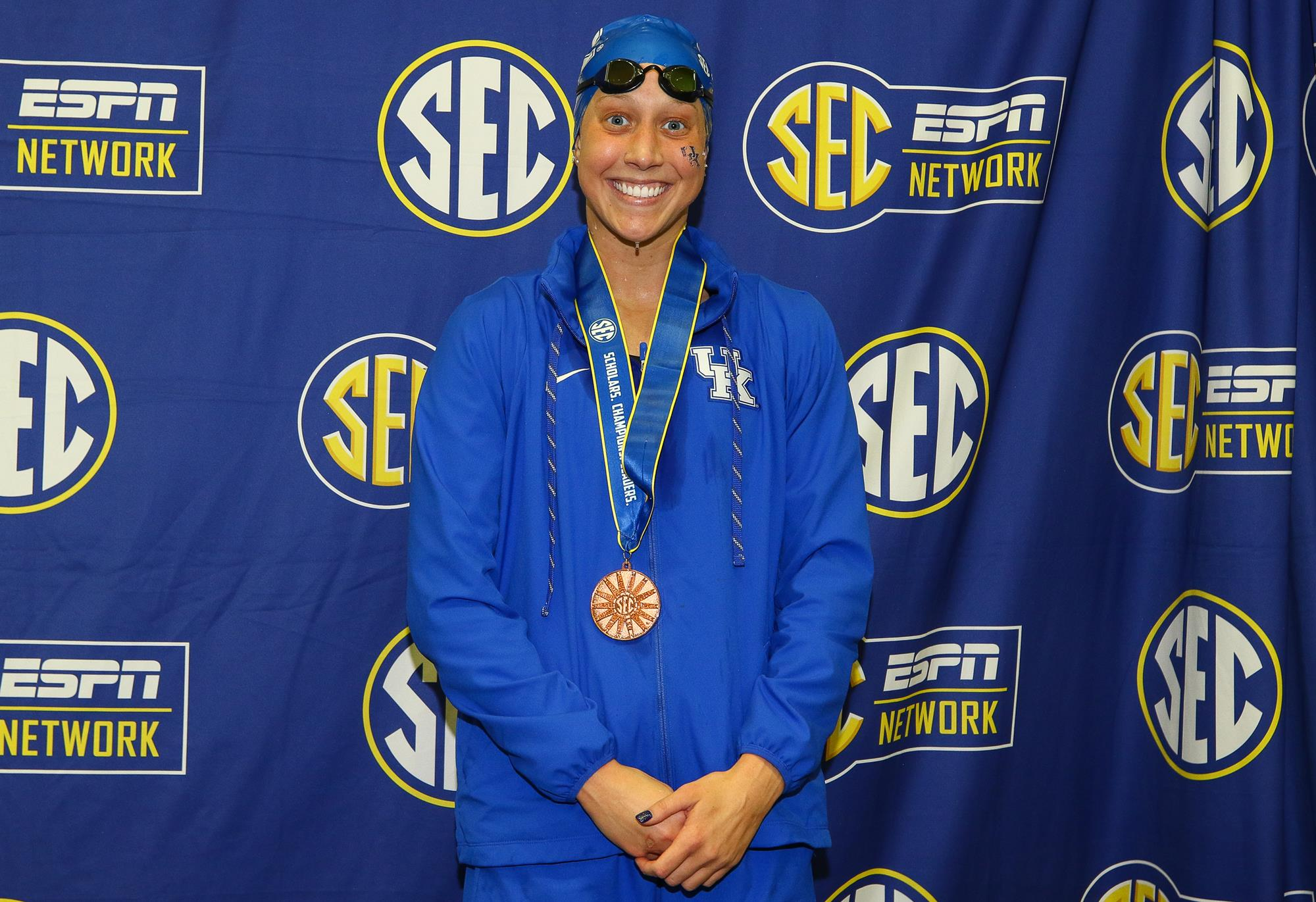 Freriks Collected Bronze and Reset Her Own School Record

ATHENS, Ga. – Another school record snapped Wednesday at the 2019 Southeastern Conference Swimming and Diving Championship in Athens, Georgia, and the UK men capped the night earning an NCAA “A” cut time in the 200 freestyle relay.

Former titleholder in the 500 freestyle, senior Geena Freriks set the standard for Kentucky early in day two when she earned a podium finish in the first individual finals event of the meet.

Senior Freriks, a native of Norwalk, Ohio, finished third in the conference in the 500 freestyle with a 4:37.04, which reset the school record that she set at the 2018 conference championship (4:37.20) to earn gold.

Sophomore Bailey Bonnett and junior Asia Seidt both had impressive swims in the 200 IM. Bonnett swam in the “C” final, posting a 1:57.22. The swim reset her personal best and moved up one spot to place second in UK’s all-time performance list.

Junior Glen Brown, who also holds the school record in the 200 IM, earned the eighth seed in the “A” finals after his preliminary swim, but finished in the sixth overall spot with a stunning 1:44.35. It was only .19 shy of his school record.

Wetzlar, who before the meet was the only current member to hold a 50 freestyle time on the program’s top-10 all-time performance list, touched the pad with a 19.49 to become the fourth fastest Wildcat in the event in school history. Mitchell posted a 19.62 in the preliminary round, while Head recorded a 19.92.

However, Mitchell and Head reset their career bests once more during finals Wednesday. Mitchell posted a 19.55 that is the fifth fastest on the performance list to find 12th place. Head rallied a 19.81 to earn 20th overall and is only .02 away from becoming the 10th fastest Wildcat in the event. Wetzlar, a native of Zimbabwe, posted a 19.53 in the finals to top the Wildcats for 11th place.

The UK women did not have competitors in the 50 freestyle finals.

In the diving division, Kentucky earned two of the eight spots in the 1M finals. Freshman Kyndal Knight reset her career best this morning, posting a 310.00 to claim third. In addition, Kailey Francetic earned seventh place with a 283.80. In finals, Knight ultimately collected sixth place with a score of 305.20, while Francetic remained seventh on a 282.95 mark. Both Wildcats provided valuable points to the women’s team total.

While it is Knight’s first conference meet, the finals showing marked a first for both Knight and Francetic in the SEC Championship.