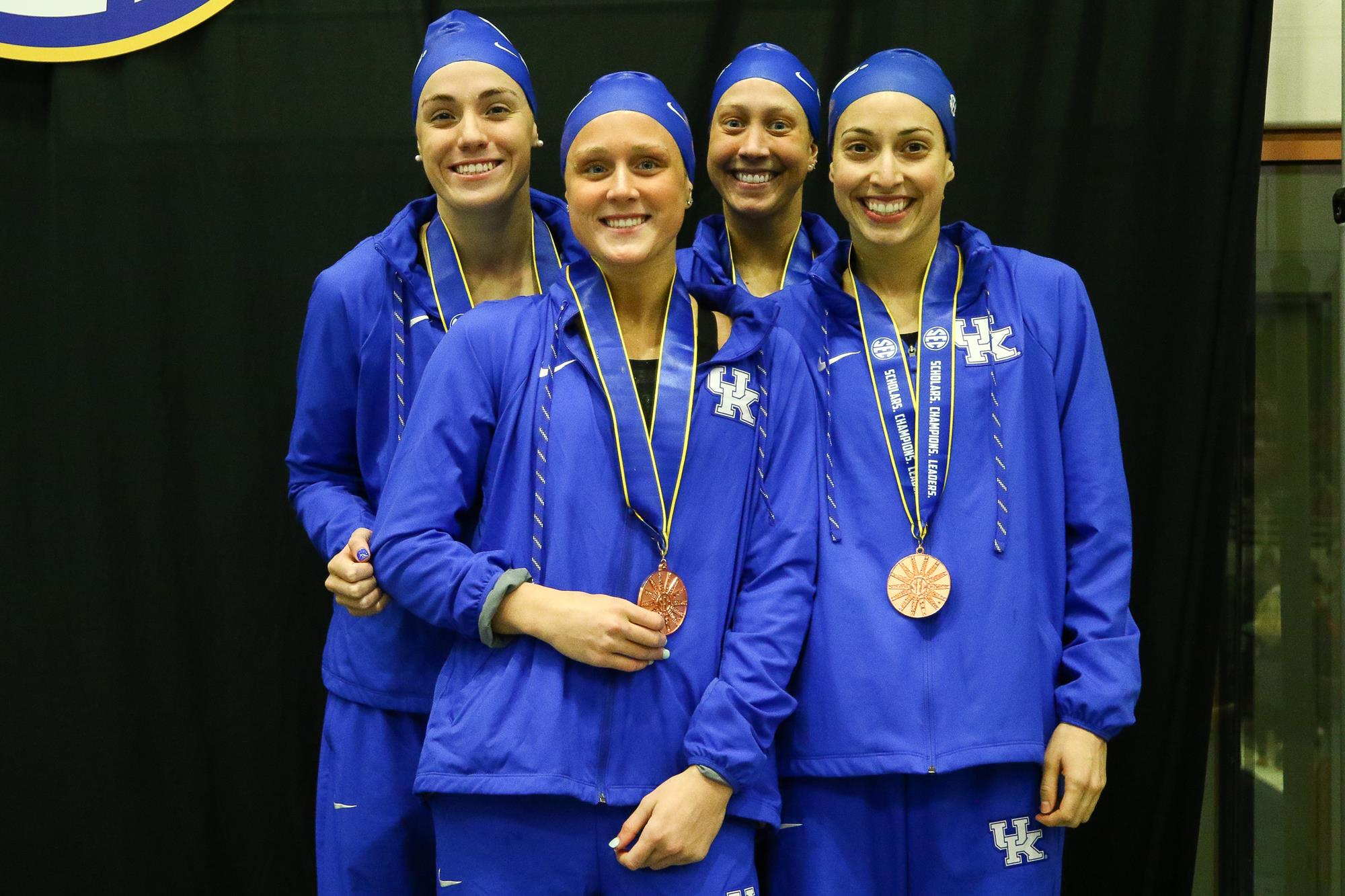 The opening day of the league meet only featured two relay races and two diving events, but Kentucky took full advantage of the unique agenda.

Sophomore Chase Lane was the first Wildcat to turn heads, setting a career best on the 1M springboard in the preliminary bout. Posting a 372.60, it is the sixth best score on the program’s all-time performance list.

Former SEC Male Freshman Diver of the Year, Lane improved his previous best by over 20 points. His 372.60 earned him third place in the preliminary set, and he became the only Wildcat diver to compete in finals Tuesday. The native of Florida earned seventh in finals with a 341.85.

“Chase was outstanding,” said head diving coach Ted Hautau. “That is the best he has done on the 1-meter, so that was a good confidence boost for him and he competed marvelously.”

Momentum only grew from there with performances by the men and women that shattered three program records. The men took control of the 200 Medley Relay, charting a 1:24.98 that reset a program record established in 2014. Senior Josh Swart led the way, followed by junior Wyatt Amdor, then senior David Dingess, while junior Peter Wetzlar swam the anchor leg. The relay team finished ninth overall in the field. It also earned an NCAA “B” cut.

The 800 Free Relay was the next and last race on Tuesday. The No. 14 UK women put pressure on the field, setting a new record of their own. Posting a 6:56.23 to break the school record, the Wildcats’ also collected bronze, the first Kentucky medal of the meet.

Junior Ali Galyer swam the lead leg, followed by junior Asia Seidt and freshman Riley Gaines, and finished by senior Geena Freriks. In addition to being penciled in the record book and earning bronze, the relay also earned an NCAA “A” cut.

UK made more history when the men crushed another school record, this time in the 800 Free Relay. After swimming the anchor leg in the 200 Medley Relay, Wetzlar swam the lead leg in the 800 Free Relay. The Zimbabwean was followed by junior Jason head, then sophomore Hank Siefert, and anchored by junior Glen Brown. The race earned the sixth spot among the field, while also earning an NCAA “B” cut.

“We broke three school records today,” said head coach Lars Jorgensen. “There were the men’s relays, and then the women’s relay getting third was the highlight. Then, Chase Lane, what can you say about him, the guy was awesome today. I’m really proud of Chase and all of his efforts. It was a good start for the Cats.”

The conference championship will resume Wednesday with the preliminary swim competition at 10 a.m., the women’s 1M preliminaries at 12:30 p.m., and the swimming and diving finals at 6 p.m.