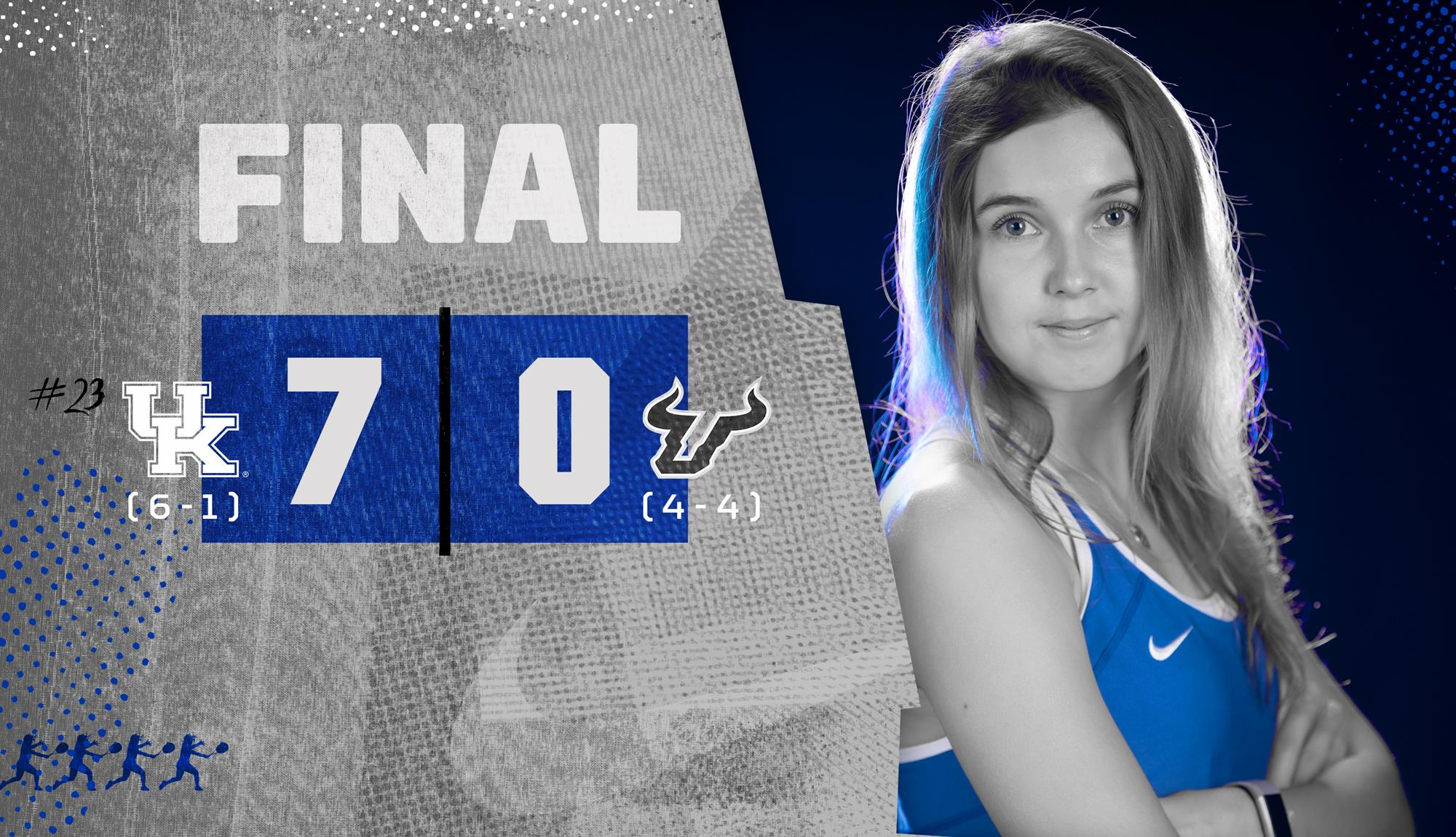 LEXINGTON, Ky. – Kentucky proved 18 days apart from the competitive scene was not a threat when the No. 23 women’s tennis program defeated South Florida Friday at the Hilary J. Boone Tennis Center, 7-0.

The dual ended an 18-day gap in the Wildcats’ nonconference schedule. The first of three home matches this weekend, Kentucky got off to a propelling start when the Wildcats clinched the doubles point. It was the sixth time in seven matches this season Kentucky has claimed the first point.

Sophomore Alexis Merrill and junior Anastasia Tkachenko led the way when the pair put together a flawless 6-0 decision on court three over USF. Seconds behind was the near-perfect 6-1 outcome on court two, which was recorded by junior Lesedi Jacobs and freshman Tiphanie Fiquet. The pair of doubles wins allowed Kentucky to jump ahead early, carrying a 1-0 lead into the singles competition

Fiquet was the first Wildcat to handle business in singles, carding a 6-2, 6-3 outcome over Amelie Boy of USF. The doubles and singles victories by the freshman boasted her perfect record, who remains unbeaten in both disciplines this season – five wins apiece.

Jacobs followed suit on court three, carding the second singles win of the dual. The Nambia native fought through a back-and-forth first set, forcing a 7-5 outcome in her favor. She ultimately collected a 7-5, 6-3 decision.

Each of Kentucky’s two seniors dropped their first sets – No. 94 Justina Mikulskyte on court one and Akvile Paražinskaite on court two. However, the veterans each made a triumphant comeback in the second set, sparking momentum for the Wildcats and brining fans to their feet.

Mikulskyte, who is the 94th-best division one singles player in the nation, upset No. 36 Ana Roman Dominguez on court one. After settling for a 3-6 outcome in the first set, Mikulskyte rallied a pair of 6-2 decisions in the second and third sets to take down the Bulls’ No. 1 singles player.

Before that, Paražinskaite forced a comeback over South Florida, rallying a 4-6, 6-1, 6-2 mark over Evelyne Tiron on court two. Her victorious finish secured the Kentucky win.

The Wildcats and the Bulls played the remaining singles matches. Sophomore Diana Tkachenko fulfilled the No. 5 spot, carding a 6-4, 6-3 victory over Laura Perello, while twin-sister A. Tkachenko capped the dual as the sixth player with a 6-3, 6-3 win over Nicole Dzenga.

Today marked the first of three matches in the program’s home swing. The Wildcats will face Indiana and NKU in a doubleheader Sunday at the Hilary J. Boone Center. The matches are slated for 11 a.m. and 4 p.m., respectively.