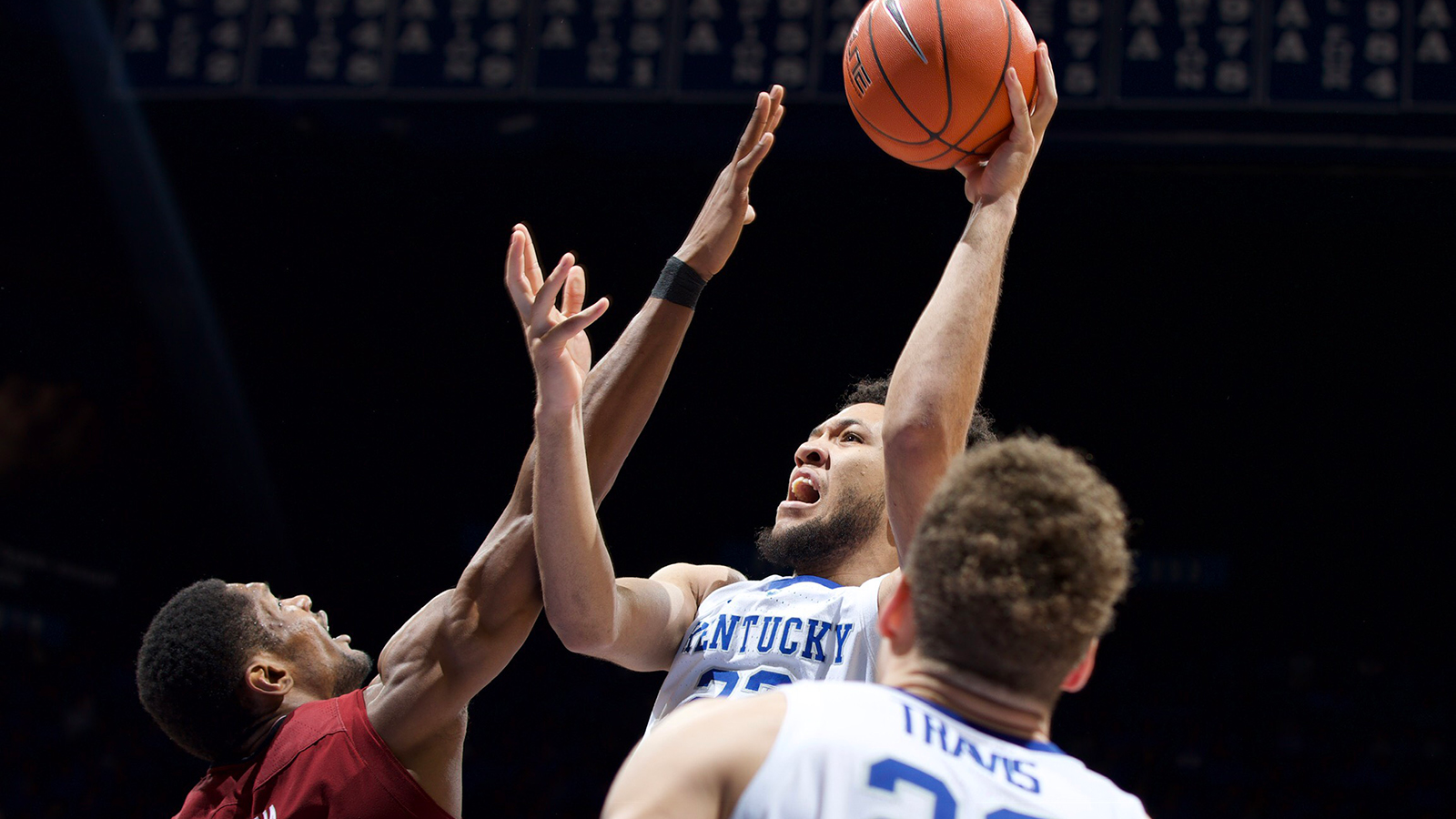 It wasn’t because Coach Cal was certain Montgomery would thrive. It was because he knew South Carolina was the perfect kind of test for the freshman at this point in his development.

“This was a great game for him to prove it against a really physical team, that they’re going to get body-to-body on you,” Calipari said. “He was able to still get it done.”

Far from shrinking from physical play, Montgomery played the best game of his college career against the Gamecocks. As No. 5/5 Kentucky (19-5, 8-1 Southeastern Conference) won its ninth straight, 76-48, Montgomery posted his first career double-double with 11 points and 13 rebounds – both career highs.

“It’s a good feeling when you put in all the hard work every day and just come out and prove you can do it,” Montgomery said.

Montgomery was energetic throughout, grabbing a team-high seven rebounds in the first half alone. He was the key cog as UK overwhelmed South Carolina on the glass, 50-27, grabbing eight rebounds on defense and creating five second chances with offensive rebounds.

“That’s what the game plan was, is to go out and play physical and just hit first before they hit us,” Montgomery said. “That’s what we did and we got the win.”

Montgomery’s first basket came when he beat the first-half buzzer with a dunk on a pretty feed from Ashton Hagans to cap a 17-4 run and send UK into the locker room with a 39-28 lead. He would also score UK’s final points of the game on a play Coach Cal drew up for him, as Montgomery screened for Immanuel Quickley, received a pass and a drilled a 3-pointer to clinch his double-double.

The play drew the wildest bench celebration of the night, emotion that carried over when his teammates found him for a Gatorade shower during a postgame radio interview.

“It was great,” said PJ Washington, who had his fourth 20-point outing in five games. “I’m happy for him. I’m one of his biggest fans and just to go out there and put a smile on everybody’s face was big for us.”

That kind of reaction didn’t come because Montgomery surprised his teammates with his play. It came because they’ve been waiting for exactly this kind outing. Similarly, South Carolina head coach Frank Martin wasn’t caught off guard by No. 23 in white doing what he did.

“EJ wasn’t a McDonald’s All-American because he’s no good,” Martin said. “I don’t know Cal’s team – I’m not at practice every day – but he’s got three guys on the front on line, two of which started last year that are both real good and a fifth-year senior. So I’m sure EJ keeps getting better because he’s meeting those guys in practice. He got an opportunity today.”

It would be easy for Montgomery to hang his head about waiting his turn behind the likes of Washington and Reid Travis. Instead, Montgomery views the position he’s in as an opportunity.

“It definitely gets me ready for physical games like this one,” Montgomery said. “Going against them every day is a challenge and it’s getting me better.”

As true as that is, it hasn’t always been easy for Montgomery. Between moments when it was clear the light was close to coming on – a pair of alley-oop passes at the end of the Vanderbilt game, a big offensive rebound at Florida – Montgomery relied on those close to him to stay locked in.

“Just kept my head up, stayed focused and kept working,” Montgomery said. “I knew my time was coming and I guess today was the day.”

Brighter moments still are in store for Montgomery, and the same is true for each of his teammates. That’s the whole goal anyway.

“What I’m hoping is by the end of the year when you look at Keldon (Johnson), you say, Wow, how much better is he?” Calipari said. “Tyler (Herro). How about Ashton? How about Jemarl Baker playing today, making shots, how he defends? How about Immanuel (Quickley), EJ, Nick (Richards)? PJ is not the same player as he was at the beginning of the year or last year.

“That’s what we’re looking to do. Let’s get better.”